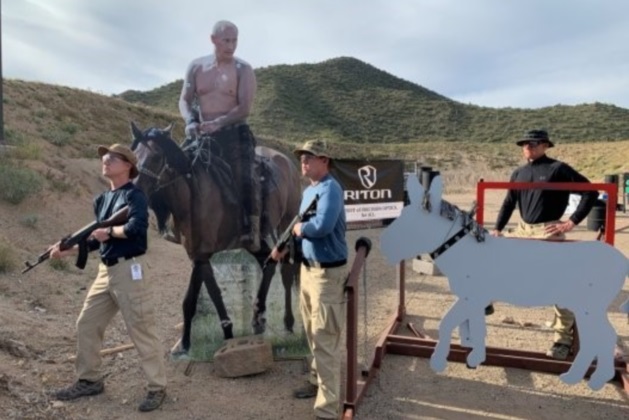 The Smith family posing with their AK-47s while Vladimir Putin watches on.

The Superstition Mountain Mystery 3-Gun, or SMM3G: this is my Super Bowl, my World Cup, my World Series. I wait all year for one of the biggest and longest-running 3-Gun competitions in the country right in my backyard of Phoenix.

This year, the match’s theme of fighting against the Russians brought some hilarious tongue-in-cheek humor and some soul-crushingly cruel stages that the Kremlin would be proud of.

My law enforcement job keeps me traveling around the world and I returned to the United States after a six-week assignment in Riyadh, Saudi Arabia, the week of SMM3G. I was competing in the limited division for the first time at a major match and I had only been able to shoot with my Vortex Optics Spitfire AR one time before leaving the country.

Compounding the problem, I had added a 12-round extension to my Benelli M2 and hadn’t tested it to make sure it would feed correctly. I had also ordered some Safariland Quad loaders and had never attempted to quad load after Duo loading for years.

Needless to say, this made for a lot of variables and untested equipment, so I headed to the range a day before the match to confirm my zero with the new optic and my loads, test fire my Benelli M2, and quad loaded a few times for good measure. Everything seemed to function OK, and though I was suffering from some major jet lag, nothing could get my spirits down after returning to the good old U.S. of A. and my favorite match of the year.

The morning of SMM3G proved to be a gorgeous spring Arizona day. My squad had some new additions from previous years and was a true cross-section of what makes the shooting sports so great.

Our squad featured shooters from Mission 22, a veteran suicide prevention-centric organization; Riton Optics; a father and his two military sons who only shoot iron-sighted military-style rifles; and a fellow LEO who had never shot 3-Gun a day in his life but had been given a spot by his sponsors to give it a try.

This broad range of talent and experience shared a few common traits, great attitudes, a hard work ethic and some friendly competition that made the entire three-day event an amazing experience. After we made our introductions, we swapped a few stories and readied our gear to begin the match. 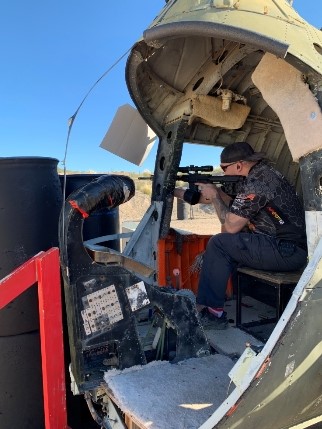 The first stage of the match featured the famous SMM3G helicopter prop and was appropriately titled “Yak-24, a Russian helicopter.” The stage had you engage two plate racks with a shotgun before abandoning it, retrieving your rifle and entering the helicopter for some close paper targets and three small plates at 300 yards through two different windows.

One thing I like about the Vortex Spitfire AR is the ability to dial distance with a provided tactical turret. This allowed me to dial to 300 yards at the beginning and adjust for the close-up shots. This, in my opinion, is a huge advantage in limited, where the long shots can make or break your match.

I was able to connect with the long-range steel with mostly first shot hits and my match was off to a great start. Our squad pitched in and helped our new shooter get his gear and ammo together and encouraged him to go slow and be safe.

Kyle slowly worked through the stage, loading his shotgun for the first time from a chest vest. Thanks to his long-range match and LEO experience, he completed his first 3-Gun stage safely and under the par time. I asked him after the stage what he thought and he smiled and simply said: “I like it.” I had seen the look in his eye before when I experienced it myself years ago. I could tell right then and there another 3-Gun addict was born. 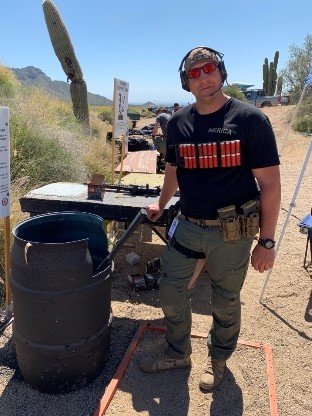 Kyle Cluff at his first 3-Gun match and loving it.

The match was sprinkled with Russian props and Stage 3, titled “Moscow Mule: featured a life-size cutout of Vladimir Putin shirtless on a horse, pulling a donkey prop you shot slugs through. The prop made for some hilarious pictures. Brian Smith, Connor Smith, and Gabriel Smith posed for photos with their AK-47s, resulting in some comedy and Instagram gold.

Another stage had you engaging multiple swinging targets hundreds of yards away from a concrete “bunker.” You then had to grab a mock pipe-bomb from a rack of them and throw it into the open turret of a tank prop, which activated multiple swinging and disappearing rifle targets.

Other fun props included red-painted hammer-and-sickle barricades you shot long-range targets through. A hawk-eyed friend of mine decided to dig a little deeper into the Russian painted on these barricades and clever use of Google Translate revealed that the Russian on the walls wasn’t just gibberish, but featured funny sayings such as “Shoot the barricade, go to the Gulag.” 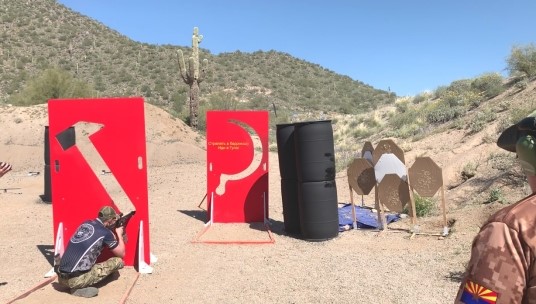 Your author shooting through the hammer-and-sickle prop at long-range targets.

These little touches make SMM3G so great and are seamlessly incorporated into your shooting experience. The match directors had to translate and hand-paint Russian onto a wall just so a few people could get a chuckle if they really wanted to. While those moments brought smiles, a few of the stages brought nothing but sorrow.

Stage 4, titled “From Russia With Love,” featured a target I will never forgive the hilarious and devious MOA Targets owner Mitch Gerlinger for creating, the clay popper. The stage started with 10 pipes on a rack, and you could easily get doubles with your shotgun with before you dumped it and retrieved your pistol from a mailbox. 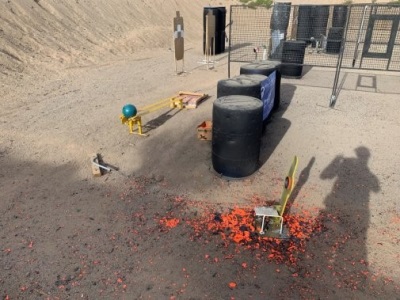 You then engaged the clay popper, and if you shot the clay without touching the target, the rest of the stage featured obstacle-free paper and a Texas Star. For myself and probably 90 percent of shooters, we managed to nick the popper, and a bowling ball slowly made its way down a ramp for about 5 seconds before activating a series of swinging targets that made your shots a nightmare. You basically took a shot at the popper and if you heard the ding of steel you ran like a lunatic to shoot a few targets before the swingers activated. I was in the running crowd and cursed MOA Targets’ evil prop.

Stage 5 featured a simple, yet skills-exposing stage. Titled “Russian Roulette,” you started with one round in your rifle with a single rifle plate about 30 yards away and two pistol racks about 10 yards away. On the buzzer, you engaged the rifle with one shot, with a penalty for missing. Then, the plate rack went back to 20 yards, about 30 yards for the pistol plates and about 50 yards for the rifle plate.

It was pretty nerve-racking to have everyone watch you take these increasingly difficult shots. You could really tell the skilled shooters from everyone else on a stage like this and my lack of shooting a pistol for months left me uttering more than a few swear words after the stage. SMM3G always throws at least one skill-based stage such as this, which really lets you know what you need to work on. I’ll be spending some time at the local USPSA and IDPA matches to tighten my pistol game back up.

After three days of laughter and tears, we gathered for the awards ceremony, featuring the best prize table in 3-Gun with over $300,000 in loot awaiting us and a ceremony I would never forget. I chose a seat closest to the stage to get photographs, and that seat ended up being the best seat in the house.

Debbie Lee, the Gold Star mother of Marc Lee and founder of America’s Mightiest Warriors, took the stage to accept a check with funds raised by Quarter Circle 10 from its full auto demo bay, which featured the chance to shoot full auto versions of their bulletproof PCCs for a nominal fee. 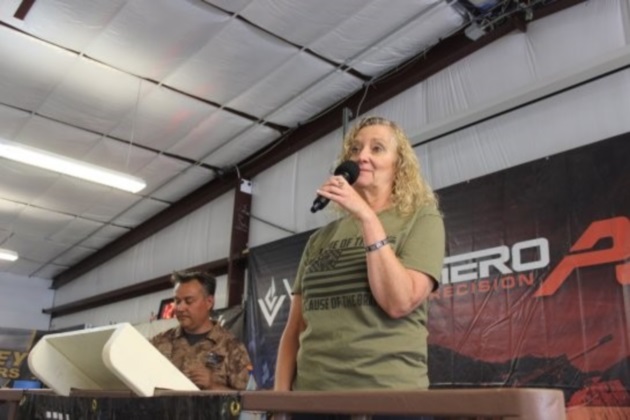 Debbie thanked the crowd for their contributions then gave the harrowing account of her son’s heroic story of sacrificing his life for our country as a Navy SEAL, as seen in the movie “American Sniper.” The room featured over 500 people and a pin could be heard dropping as Debbie gave her testimony and the work that America’s Mightiest Warriors does now to help our wounded veterans. When Debbie finished, POF USA owner and overall match sponsor Frank DeSomma matched the money raised by Quarter Circle 10 and a feeling of pride and heartbreak was felt by all.

I selected a mystery box from the prize table, as I can’t resist a good gamble. Though it didn’t contain a gun certificate, I took home some nice prizes from Timney, Red Hill Tactical, and Aero Precision. There was something special about the match this year. Being back in America and spending time with amazing squadmates and friends, doing a sport I love and raising money for worthy causes all while improving my own shooting skills just felt extra sweet.

Even when your match isn’t going right, your equipment fails (or you’re using it for the first time), or you hit a popper that activates no shoots, we are all fortunate to live in the country we do and for the sacrifices that have been made so we can have the freedom to enjoy these endeavors. The match’s theme was a reminder that good men and women will always stand up to oppression wherever in the world it exists, and I am so thankful to live in the greatest country in the world doing what I love.