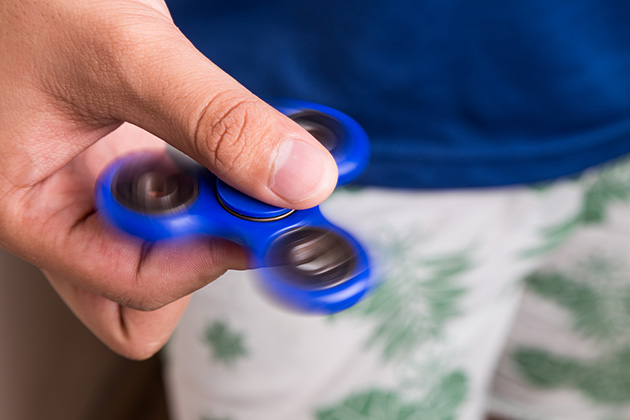 A new toy trend is literally spinning its way through schools and social media. Surprisingly, it's not a high-tech gadget — it's a colorful piece of plastic called a fidget spinner.

These toys are the latest craze, but are they actually doing what they're marketed for?

Fidget spinners are small, usually inexpensive, top-like gadgets that you spin with your fingers. The gadget has a stable middle and a disc with two or three paddles that can be spun, much like a tiny ceiling fan.

The colorful fidgets were originally designed as a stress-release tool meant to help children with ADD, ADHD, anxiety and autism focus by occupying their hands, therefore improving concentration. The spinners have caught on with the general population and now occupy the top spots on Amazon's best sellers list.

These beneficial claims make fidget spinners different than most recent toy sensations — like slime and Hatchimals — but do they work?

Some mental health and education experts, like Nancy Hammill, agree that self-regulation tools can promote movement and tactile input, and can provide calming benefits for students who struggle with attention, focus and sensory processing. Hammill says the key is to teach children how to use fidgets as the tools they are meant to be instead of toys that distract from learning. Experts urge educators to model the correct use of the fidget tool and then give the child an opportunity to use it appropriately.

There are currently no academic studies on the specific effectiveness of fidget spinners when used to help children cope with ADHD. But Dr. Mark Rapport, M.D., Director of the Children's Learning Clinic at the University of Central Florida's Department of Psychology, told the Daily Mail that his research indicates these children do benefit from some forms of movement when engaged in challenging mental tasks.

Another study, published in the Journal of Abnormal Child Psychology, found that the more kids with ADHD fidgeted, the better their working memory. The study found that such movement probably stimulates underactive regions of the brain, like the dorsolateral prefrontal cortex, which plays a role in attention, planning and impulse control.

However, as much as kids love fidgets, they are getting mixed reviews from teachers across the nation. In response to the exploding popularity of the toy, some schools have banned them from being used in classrooms.

The Chicago Tribune reported that at least two schools in the Chicago suburbs have become "no spin" zones. The list also includes schools in Connecticut, Florida and Indiana. One school in Kentucky now requires students to have a doctor's note in order to bring the toy to school.

Fidgets aren't just child's play. If you can't stop tapping your pencil during a boring meeting, here's good news for you — spinners are also the top office toy of 2017, according to Forbes.

This national trend has also created an economic boom for the toy industry. According to a Fox Business article, it's estimated that more than 200 million spinners have already shipped to retailers this year.

Like most toy fads, this one will probably wind down once the school year ends, but some parents hope that when that happens, people understand the original intent of these "toys." They're useful tools, and parts of the population genuinely need them.