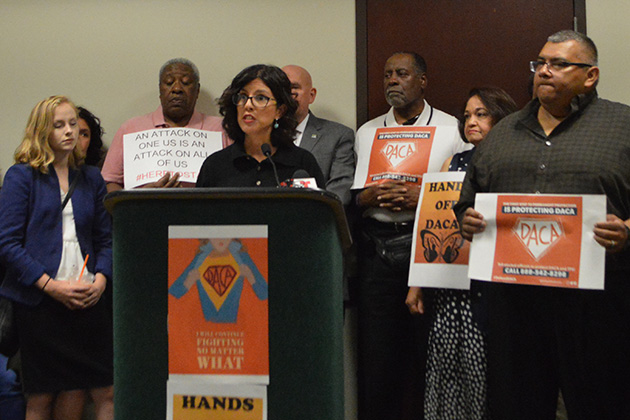 SACRAMENTO, Calif. — The federal Deferred Action for Childhood Arrivals (DACA) program turned five Aug. 15. The policy lets immigrant youth under 30 who arrived stateside to apply for legal living and working status — provided they have no criminal record — and, crucially, to avoid deportation.

Since 2012, about 800,000 immigrant youth across the U.S. have entered the DACA program, and 27 percent (216,000) live and work in California, according to Rhonda Rios Kravitz, head of Alianza, a nonprofit group that advocates for DACA youth.

"There is heightened fear in the immigrant community now," she said, due to the uncertainty of the DACA program continuing under President Donald Trump. On the campaign trail, Trump vowed to end the program, but has softened that stance since taking office, despite escalating immigration enforcement.

"There are no negative consequences to the DACA program," said Yesenia, 27, an immigrant from Michoacán, Mexico, who declined to use her surname, is a current DACA recipient working full-time, and pursuing a master's degree in public policy at California State University, Sacramento (CSUS).

Yesenia is referring to the fees and taxes that the program's recipients pay. The fee for initial applicants and annual renewals of DACA is $495, and program recipients also pay local, state and federal taxes just like native citizens. With 800,000 immigrants paying $495 annually, the program brings in nearly $400 million each year.

Currently, a caravan of DACA youth is traveling throughout California to speak with elected officials and to spur favorable public opinion. Congresswoman Doris Matsui (D-Sacramento) backs the continuation of DACA, as does California Gov. Jerry Brown, a Democrat.

"We support our DACA students forever," said Robert S. Nelsen, CSUS president, at an Aug. 15 news conference at the school.

Crucially, DACA does not provide a path to U.S. citizenship. That is why comprehensive immigration reform is such an urgent matter, Rios Kravitz said.

State attorneys general in Arkansas, Alabama, Kansas, Nebraska, South Carolina, Tennessee and West Virginia have sent letters of intention to sue to Trump if he does not rescind DACA, according to Rios Kravitz.

The California Chamber of Commerce declined a request to comment.

"Last weekend's events in Charlottesville, Virginia, are deeply related to threats to DACA," said Jennifer Eagan, president of the California Faculty Association, a labor union of professors, librarians and coaches. "We are not going to let the president and his red state confederates repeal DACA. That is unacceptable."

"DACA pushes our campuses to do policy-wise what is vital and ethical," said Margarita Ines Berta-Ávila, a professor in the College of Education at CSUS.

Other speakers at the Aug. 15 news conference drew parallels between the Civil Rights Movement of the 1950s and 1960s, which fought and defeated legal discrimination against black Americans, to defending the DACA program for immigrant youth today.