Farm to table: More than a trend, a way of life 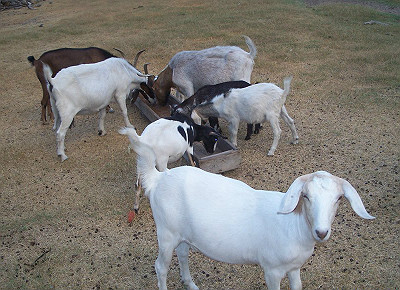 Feeding time in the evening for a few of the many goats at New Frontier Farm.

What began as a hobby for one retired American Airlines flight attendant has now become the focal point of her life: sustainable farming.

Betina Hawkins, along with her partner Cliff Patterson, owns and operates New Frontier Farm in Corsicana, Texas — about an hour and a half south of Dallas. The 23-acre farm, which has been operating for about five years, is just one example of the growing trend of sustainable farming.

"Becoming more aware of the dangers of processed foods, we wanted to start drinking our own goats' milk and making cheese and raise our own vegetables," Hawkins said. "One goat turned into a herd of about 75, and we now raise dairy, meat and dwarf goats, as well as meat rabbits, chickens and some ducks."

Initially, New Frontier distributed its products at farmers markets, through the Internet and by word of mouth.

"By next spring we hope to have a year-round market here on our farm where people can see where what they eat is coming from," Hawkins said.

Hawkins became involved with the farm-to-table movement through her friend, Kristine Orth of Eden Creek Farm, who raises Red Wattle hogs that are on the critically endangered list of the American Livestock Breeds Conservancy.

In an effort to raise awareness of the breed, Eden Creek Farm in Blooming Grove is sponsoring a farm-to-fork dinner on Oct. 5 at New Frontier.

"We helped with the last farm-to-table dinner [Orth] hosted and decided we would host the next one here," Hawkins said. "And we are hoping to have one each season, especially now that we have erected our new greenhouse, which will enable us to raise vegetables year-round."

At this 100-mile dinner — where the meal is prepared using only ingredients that are available within 100 miles — chef Graham Dodds of Hibiscus in Dallas will create a four-course meal using ingredients from New Frontier Farm.

"We probably won't know exactly what he will serve until the day of the dinner," Hawkins said. "That makes it really exciting."

Hawkins speaks highly of Dodds' ability to transform ingredients into culinary art. But that's really no surprise, given Dodds' background.

"My dad follows chefs like most people follow sports," said Dodds, who was raised in Hurst, Texas.

But his dad hasn't been his only culinary influence. His grandfather keeps bees for raw honey, and his grandmother has always maintained a garden. Additionally, a family friend, who happens to be a retired Swiss chef, taught Dodds to create souffle when he was only 9 years old. So, Dodds has been cooking most of his life.

He's honed his skills by experience. Traveling throughout Europe and living in several states known for sustainable farming, Dodds says using local ingredients is only natural.

"I left Texas 15 years ago and traveled all around the States and Europe, and all these places I lived [Vermont, Colorado and Oregon] were all sustainable with everybody growing stuff and using all local stuff, so it seems strange to bring it in from outside when there is so much already at your doorstep," Dodds said. "That's what you use first, and that's kind of how I was programmed as far as how to cook.

"You build relationships with these farmers, and they come to you and ask what they should grow, and then they're growing stuff just for you. And then things start working, and you know exactly where the food is coming from."

Katy Bynum is a journalist with 15 years of experience in media, and she is currently a content editor at MultiBriefs. Katy has worked for daily, weekly and monthly publications and is also the former co-owner of The Courier newspaper in Colleyville, Texas.