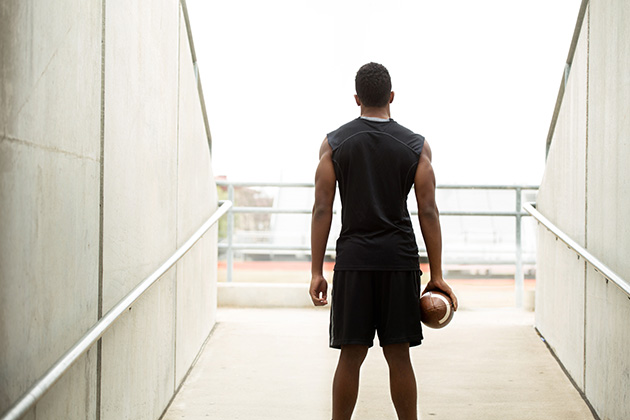 It is no secret that the black male has been the engine for collegiate sports for many decades now. African American athletes make up about 60% of all college football and college basketball teams. Football and basketball are the two revenue sports that dominate college sports.

That dominance has created an incredible source of revenue for the biggest schools. Last year, the University of Alabama collected $177.5 million in athletics revenue, and the University of Texas clocked in at more than $219 million.

As part of the podcast “Gangster Capitalism,” a program dedicated to examining the college admissions scandal that has rocked the news this year, sports journalist Kevin Blackistone examined the racial overtones existing in the matter of high-level college sports.

Blackistone, a frequent guest on ESPN and columnist for The Washington Post stated, “On college campuses, there are two sports, and it’s not football and basketball. It’s basketball/football and everything else. Basketball and football are known as revenue-generating sports and every other sport — sailing, wrestling, rowing, softball, tennis, golf — those sports are known as expenditure sports.

They cost the university money to run and they don’t bring in any revenue. Who or what funds those sports? The what is football and men’s basketball, and the who are the black male athletes that predominate the rosters in football and basketball. Without them, you wouldn’t have the excitement that attracts the television contracts and the advertisements that turn into revenue.”

In 2017, the National Collegiate Athletic Association (NCAA) listed its revenues at $1 billion dollars, over $800 million dollars of which came from television rights and marketing fees during the NCAA Men’s Basketball Championship, or March Madness.

With so much money being made on the backs of black college football and basketball players, there have been swift denials up to now whenever it is suggested that college players be monetarily compensated — until now.

While SB 206 does not force universities to directly pay the athletes, and the bill is valid only for players attending schools in California, it is a dramatic step in allowing the athletes to make money in a system that has historically paid them nothing.

Appearing on LeBron James’ show “The Shop,” Newsom praised the bill, saying, “The interest of the athletes is finally on par with the interest of the institution. Now, we are rebalancing that power arrangement.”

While SB 206 will not go into effect until 2023, the ramifications of it are gigantic. According to Sports Illustrated, the players could negotiate to appear in video games, be compensated at an autograph signing show, and turn up in car commercials. The athletes can also hire sports agents for representation in gaining more marketing opportunities.

While the argument of college athletes being paid has always been a fire starter, the legal root of the battle began with Ed O’Bannon. An All-American UCLA men’s basketball player who was a leader on the school’s 1995 National Championship team, O’Bannon brought a suit against the NCAA after seeing his likeness in the Electronic Arts video game “NCAA Basketball 09.”

O’Bannon wrote in Sports Illustrated, “I saw myself featured in a college basketball video game that sold for $60. I hadn’t asked to be in the game. And no one had offered to pay me, or any other current or former players who were ‘in the game’ as the game’s advertisement boasted.”

Seeing a player that matched his likeness in the video game, O’Bannon brought a lawsuit to the NCAA, which resulted in a seven-year battle that he won. Electronic Arts halted production on both NCAA basketball and football video games.

Reflecting on his victory and seeing how SB 206 can help, O’Bannon wrote, “Treat college athletes with basic dignity. Fans will still watch games. Schools will still make a lot of money. And the scales of justice will tip in the right direction.”

The reaction to the legislation was mixed, to say the least. For every sports figure such as Duke basketball coach Mike Krzyzewski, who supports the act, there were just as many questioning it.

Former University of Florida quarterback Tim Tebow worried that it will ruin the integrity of the game, saying, “Here is one of the issues, I think, if you get to paying them for their name and likeness, is where does it stop? Does it go to high school, does it go to Pop Warner? Are you continuing to have agents all in the game?”

At the recent Chicago Sports Summit, DePaul Athletic Director Jean Lenti Ponsetto commented on SB 206, saying, “It would be the demise of intercollegiate athletics as we know it.”

While the debate of whether to pay college athletes or not is one that has been around for years, when two sports dominated by black men are highlighted, the animus becomes more visceral.

It is not lost on many that race is at the center of this issue. The black male body has historically been used for its strength in many different types of labor: from share cropping, the prison industrial complex, and sports. The black male body is never looked at as a human being, but a thing to produce capital.

It is exploited and almost never compensated properly. We are forever slaves, so when there is a chance to change this, America balks. Any kind of proposal or act to level the playing field for African-Americans, such as the GI Bill, affirmative action, or Affordable Care Act has been met with hostility. It’s as if there is a need for us to be slaves.

If America is committed to righting the wrongs of the greatest sin and all the oppression and racism which has emanated from it, then we have to be honest about our opposition to the Fair Pay to Play Act.

Ask yourself, “Why am I opposed to college players making well-needed money from their likeness?” Many of these players come from poverty; their families have not had the resources to help them out as they attend school.

I have heard so many stories of athletes living destitute while on campus, barely able to afford food or necessities needed to go to college. We have to ask ourselves, “Would it be this big of a deal if the majority of college athletes in football and basketball were white?”

College sports are a multibillion-dollar industry with no end in sight. The cash machine of collegiate basketball and football is too big to fail.

SB 206 does not stop this nor divert any of the monies made from the schools. It just says that players will get a chance to profit from who they are.

Even conservative states like Kentucky have begun to look into their own version of SB 206. It is time for players to be compensated. More specifically, it is time for black college athletes, whom the industry is built on, to be paid.