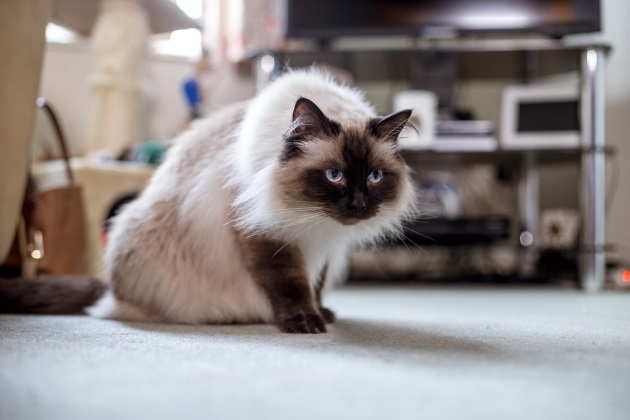 My first encounter with an animal displaying shadows of normal behavior occurred early in my veterinary medical career. During a routine examination/vaccination appointment, a client told me she had to teach her Himalayan cat how to use the litter box when he was a young kitten.

"Even though he was 8 weeks old when I got him, he seemed a lot younger than that," she explained. "But because he was eating on his own, the breeder said he was ready to go."

The client also noticed that her new kitten did something odd every time he used the litter box. First, he’d scratch at the wall, then he’d urinate or defecate on top of the litter, and then he’d get out of the box and dig at a nearby rug.

Because the exposed waste bothered her, she decided to teach him to cover it. The client then described how she gently guided the kitten’s front paws to dig a hole in the litter every time he got into the litter box.

Next, she placed the kitten over the hole until he urinated or defecated. When he finished, she would manipulate his front paws again to cover up his waste. After several months of religious repetition, the kitten started displaying the sequence on his own.

At the time, I filed this information in my "unusual animal behavior" mental file. This, despite some of my co-workers beliefs that filing in it some "abnormal client behavior" file would be more appropriate.

Initially the cats I encountered with similar behaviors were almost all Persians or Persian derivatives or mixes. Even though none of those owning these animals went so far as to teach their pets proper elimination behavior like that first client did, these animals all displayed the same pre- and post-litter box behaviors.

During this same period, I started getting behavioral as well as bond histories from my clients in my quest to understand why companion animals did what they did. Lack of quality maternal care long enough was a recurrent theme in the backgrounds of the shadow eliminators.

So was the lack of a mature animal of the same species in the new owners’ household. At the time, many people still believed that as soon as kittens could eat on their own, they were ready to go to new homes. But because animals nurse for behavioral as well as nutritional reasons, some young animals capable of eating on their own may not have had sufficient time with their mothers to develop other skills necessary to succeed.

I refer to these elimination behaviors as shadow behaviors because, if you look at the discreet movements displayed by these cats, these represent the complete feline elimination cycle: scratch (to dig a hole in the litter), eliminate it, and cover the waste. However, these animals’ brains hadn’t linked these components to form a sequence displayed in one location, i.e. the litter box.

During this same period, I realized that kittens could use another behavior — sucking — in different ways, too. Logic says that this behavior possesses an even closer connection to premature weaning than the elimination-related disconnect.

Back then, so-called "wool-sucking" was considered a vice that inevitably would lead to grave physical consequences. However, I only can recall one cat that came anywhere near this grave prediction. As often occurs with behavioral problems, the client didn’t mention it until after it reached crisis proportions.

The cat, also a purebred Himalayan, belonged to a woman who had an almost pathological aversion to cats of any age sucking for reasons I’ll leave to the Freudians to unravel. Consequently, when her new kitten started sucking on a soft toy, she took the toy away. When the kitten sought other sources to suck to comfort himself, she took those way.

But she also squirted the kitten with a water bottle, yelled at him, and even hit him on at least one occasion. Throughout his first two years, the cat had no medical problems or showed any signs of them during routine visits. During this same period, she also made sure all her closet doors were firmly closed before she went to work so the cat didn’t have access to any clothing.

Until the day she forgot. On that day, the cat went on a sucking spree that left holes in her sweaters, dresses, skirts, jackets, and slacks in its wake. One hole per garment. At that point she brought the cat in, not as you might expect for the mother of all wool balls, but for euthanasia because "he’s so spiteful."

Fortunately, I recall that case because it was the exception. By then I’d recognized that most people who had sucking cats either didn’t realize this, or realized it, but considered it normal feline behavior. This most likely occurred because we lived in an area that was still rural where barn cat offspring made up a significant proportion of the pet cat population.

During this part of my career, I had two such cats. One used to suck on the cuff of my then 3-year-old son’s pajama sleeve while the child was sleeping. I had no idea this was going on until I actually saw it. My son never mentioned it because he thought it was normal.

I also had a stealth-sucker whose identity I never determined. I only know that cat existed because a visitor ask me why a throw I had folded over the back of the couch had little wool nubs instead of fringe.

At that time, the resident cats included a Siamese and a barn cat so either or both could have done this. More recently, I had a cat of barn cat origins who sucked my hound’s ear. None of these cats experienced any health problems and the behavior waned then disappeared when the animals were around a year of age. These experiences suggested that this was normal behavior that caused no problems the majority of the time.

Studies of free-roaming cats living around reliable food supplies — such as in barns, at dumps, around dumpsters that attract rodents — wouldn’t wean their kittens until they were 12-18 months of age. This represents an ethological stroke of genius because of all the behavioral benefits it confers to a group of naturally more solitary who congregate around a reliable, but not infinite, food supply.

Among them, it gives queens enough time to teach their young everything a member of a naturally more solitary species needs to know to survive in a group of like-minded animals forming a loose social group. Delayed weaning also keeps the young from sexually maturing, thereby dampening all the more aggressive behaviors associated with that.

It also keeps the nursing females from going into heat, which serves as form of birth control. And it keeps mature males from hassling her youngsters until the latter learn how to communicate with other cats properly.

Some kittens suck on people, too. Next month’s brief will consider this behavior and some other normal companion animal ones that may create problems for the animals and their people.