Enjoying the results of the Civilian Conservation Corps 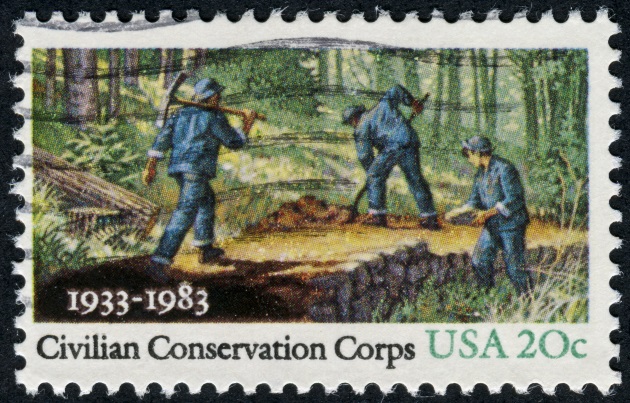 A stamp commemorating the CCC's 50th anniversary was issued on April 5, 1983.

Whenever we travel, we look for evidence of the Civilian Conservation Corps (CCC). It was formed by President Franklin D. Roosevelt in 1933 to provide jobs for young unmarried men to help bring the country out of the Great Depression.

They lived in camps and were given a place to stay, free food, clothes, medical care, and training. The men earned $30 dollars a month, of which $25 was sent home to support their families.

The program was considered the most successful of the New Deal. The men became fit, learned certain skills and were more employable. In the longer term, the results of their work can be appreciated by all of us across the United States.

A major project by the CCC was the reforestation of the United States, including the area of the Dust Bowl after forests were reduced in size or disappeared in the early 1900s. It was estimated that almost 3 billion trees were planted by the CCC.

A more easily seen reminder of their work is the many state and national parks we enjoy in our travels. CCC projects in national parks include the roads, bridges, buildings, fire towers, trails, and campgrounds in the Great Smoky Mountains National Park from 22 separate CCC camps.

There was work on the Blue Ridge Parkway, including work along the road such as planting trees. At least seven different CCC camps worked at Grand Canyon National Park to construct roads, trails, shelter, lodges, campgrounds, and visitor centers. The camps were located both above and at the bottom of the canyon. The CCC also built many of the roads and trails within Zion National Park.

Personally, I love the work done in state parks throughout the United States. In Florida, the CCC restored the historic Fort Clinch and built Fort Clinch State Park in 1937. Though it looks like limestone, this refectory (or “castle”) was built by the CCC using blocks of the local caliche at Lake Corpus Christi State Park in Texas.

The CCC restored the ruins of an old mission at Goliad State Park and Historic Site to look similar to other missions in Texas.

The CCC park buildings at Gooseberry Falls State Park in Minnesota are simply gorgeous. The building materials of red granite and dark gabbro really stand out.

Hiking to the various buildings and structures throughout the park becomes a treasure hunt. Buildings made by the men include Lady Slipper Lodge, a water tower, the wall called Castle, a pump house, several shelters, guard rails, and even rock picnic tables. Even the pump house is a work of art!

The CCC was busy at Petit Jean State Park in Arkansas. While the Mather Lodge, cabins, and a water tower stands out, the CCC work at this park includes over 80 buildings, structures, trails, and bridges.

The CCC built the first road into Bandelier National Monument in New Mexico. Over eight years, the men built 31 buildings, a fire tower, and even some of the furniture. They built trails and worked with archeologists on the ancient sites. All of O’Leno State Park in Florida was developed by the CCC. This included clearing the land, building roads, developing trails, and constructing most of the buildings.

At Coopers Rock State Forest in West Virginia, the CCC built the main overlook along with multiple structures including picnic shelters and the superintendent’s house.

As an extra bonus in your own treasure hunt, there are currently 73 statues of the CCC Worker celebrating their work. These can be found all across the United States and are fun to find.

The amount of work done by the CCC program in such a short time is simply amazing. While the initial purpose of the program was to solve the financial problem of the Great Depression, the results have lasted a very long time and were built to last for even more generations to enjoy.