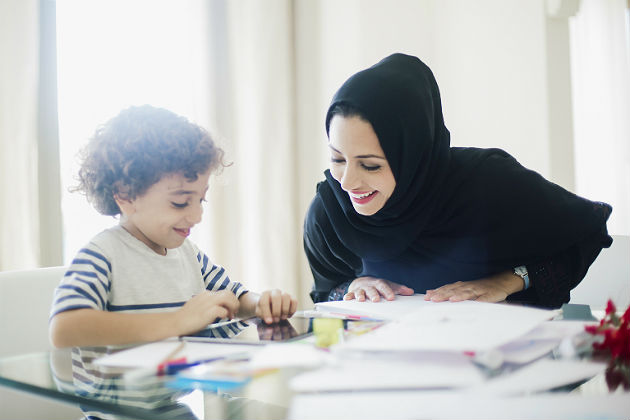 Parental and familial involvement in schools has long been known to increase academic achievement and long-term success for students. Research points out that students whose families are engaged in their education achieve at higher levels academically, have better attendance rates, graduate at higher levels and enjoy school to a higher degree.

However, engaging families of culturally and linguistically diverse students can at times be challenging for schools and districts for a variety of reasons, including (but not limited to):

It is clear that people from every culture value education. While there may be differences in how children are educated, and differences in beliefs in terms of what they should learn, people from any cultural background want what is best for their children.

However, what the school as an institution believes about how and when parents should be involved, and even what a good education means, may differ significantly from what families and parents believe.

Some families may feel their role is to take care of their child when they are at home, and the role of school is to educate their child. In some cultures, teachers are held to high esteem; it would be inappropriate for a parent to intervene in school affairs.

For other families, attitudes toward school differ significantly in terms of the role of independence. Some may feel school is the realm of the child, and the child must learn to navigate this world in order to be successful later in life. For some of these parents, being heavily involved in school may feel as though they are coddling their children or denying them the opportunity to become independent.

As educators, we can provide parents with information on parental involvement, while still acknowledging and validating families' home cultures. It is important for parents to understand that involvement can come in many forms. Parents can become involved at the school level or at home, and in ways that validate and honor their cultural perspective.

Perhaps the first consideration in getting parents involved at the school level is creating an environment that is welcoming and inviting. The office environment should, if possible, represent the languages and cultural norms and perspectives of the community.

For example, having signage in multiple languages and pictures or objects that are representative of the cultural groups can provide a level of familiarity. The office staff should be friendly and welcoming to all who walk through the door. If possible, include office staff that speak the languages of families in the community.

In some schools, it is not possible to have staff members that speak all of the languages represented in the community. It is critical, though, that office staff be interested in welcoming all people and making them feel a part of the school community.

Because language can be a barrier for some parents, having resources that help minimize the barrier, such as signage in multiple languages, interpretation services from staff members or via a telephone service, or brochures and information printed in multiple languages can all be helpful.

Parent communication is also a critical aspect. Interpreters should be available for any school or community events. This sends the message that it is important for parents to understand the information that is being communicated.

While some believe providing interpreters enables people to not have to learn English, the reality is it takes time to learn a language. In the meantime, it is critical that families feel validated and the school send the message that their voice is also heard.

Many schools host a variety of events that are designed to bring families in the community together. Back-to-school-nights, celebrations, carnivals and even parent-teacher conferences all help to get parents involved in their child's education.

Other events such as math or literacy nights can also help parents to learn fun and engaging activities they can do with their children that do not require deep levels of content knowledge. Coffee with the principal or before, during or after school meeting opportunities can also bring parents in on an informal basis to build positive relationships.

Parents often want to know what they can do at home to support their child's success at school. With changes in national standards, some parents feel uncomfortable or are unfamiliar with new instructional and learning techniques, especially in mathematics. Differing levels of educational attainment can also make parents feel as though they cannot help their children sufficiently as they do not know the content areas being studied.

In any case, though, there are multiple strategies in which parents can engage to help demonstrate the importance of education.

Having parents ask their children questions about what they are studying is also a helpful technique to encourage discussion and demonstrate an interest in their child's life and studies. When asking questions of children, it is important that we probe a bit deeper than the typical question of "What did you do today?" as students' pat response is "Nothing" or "Not much." Providing parents with language they can use in the form of question stems or sentence starters that can be utilized in any language are helpful tools for parents.

Children of all ages also benefit from read-alouds. Reading with children demonstrates the importance of reading and the enjoyment that can come from literature and nonfiction text. For older children, parents can also read the same book as the child and have discussions about the text. As mentioned above, even asking students about what they are reading, who the characters are, what the setting is, what they key takeaways are from the text, etc., can be of great benefit.

Encourage parents to talk to one another. When parents are on the same page in terms of what school expectations are, and how they can work as a partnership with schools and educators to help their children succeed, everyone benefits. Talking with peers is comforting, and often a conversation with another parent can help clarify issues, procedures and cultural differences, as well as celebrating the wonderful things happening in children's lives.

When parents and families are engaged in the school, everyone benefits. Culturally and linguistically diverse families bring a richness in perspective to the school community, and help reflect the diversity that makes our world so wonderful. While some barriers exist to getting families into schools, educators can continually work to remove those barriers and help involve families in their children's education and school community.