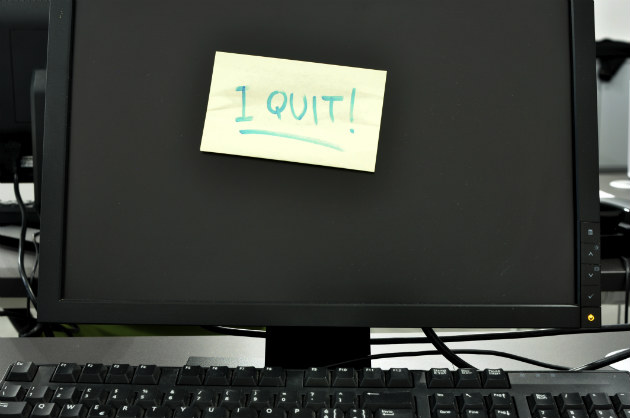 Don't look now, but your employees are getting ready to leave — in droves. At least that's what they told the survey researchers at Salary.com.

Results from the website's 2014 annual Job Hunters Survey show 83 percent of employees are actively looking for new jobs this year, up 6 percent from last year. What's more interesting, though, is why.

Employees tend to hunker down during the bad times and stick with the job they have, grateful to have a job at all. When the economy and job market improve, they become more optimistic and begin thinking about their options. So it's hardly surprising that more employees are considering a job change as the economy shows signs of gradual improvement.

What's different about this year's survey results is that more employees said they were "happy" in their current positions, including 28 percent of those who said they are hunting for a new job. Moreover, while money remains a driving factor, only 16 percent of respondents listed it at their top concern — one third fewer than last year. Together, these findings suggest something else is going on besides wanting to get out from under the same old grind.

At first glance, it would appear no major source of discontent is motivating employees to hunt for a new job. When asked why they were thinking of leaving their current position, respondents cited a variety of reasons, from low pay and benefits to uncomfortable situations in the workplace due to a bad boss or co-workers.

Several other reasons cluster around the top, just below low pay: "no possibility for advancement," "underappreciated" and "not challenged." These factors speak to what is commonly referred to as employee engagement. In other words, these employees (nearly 1 in 4 of all respondents) are looking for another job not because they necessarily do not like their current job, but rather because they think their current job does not allow them to perform to their full potential.

Here we have an interesting quandary. Employers are looking to increase productivity, and productive employees (many of these respondents had received a raise or promotion in the past year) are feeling underutilized. Presumably, these are the employees that an employer would most hate to lose.

In addition, in a more recent Salary.com survey, 89 percent of respondents said they waste time at work every day, up from 69 percent last year. About half (53 percent) said they did so to take a short mental break and improve their productivity overall, but others mentioned boredom (20 percent), lack of incentive (8 percent), being unsatisfied with their job (7 percent) and not getting enough pay (2 percent).

Clearly, the troops are restless. They are feeling disengaged from their jobs and their companies.

Realistically, we are not likely to see a mass migration of workers in the coming months. However, these findings should be a wake-up call to employers and leaders. They should be having conversations with their better performers to find out why they are feeling disengaged and how they can better employ their skills and talents.

Leaders need to reconnect with their entire workforce to get them more involved in the organization and to give them a reason other than a paycheck to apply themselves at work. More pay is always appreciated, but as the job market improves, more meaningful work may make the difference between retaining employees and losing them to a competitor.