Eating pizza doesn’t have to be unhealthy 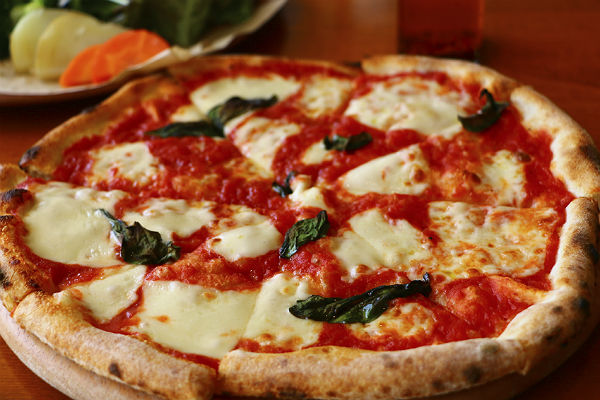 The traditional Margherita-style pizza consists of a basic crust topped with tomato, mozzarella cheese and basil.

Brick oven, wood-fired, coal-fired, thick crust, thin crust, deep crust, cheese, white sauce, red sauce, pepperoni, sausage, pineapple, basil or mushroom. There is no doubt that pizza comes in many forms and can satisfy the multitude of tastes across the United States.

Americans consume an average of 46 slices of pizza yearly, and 93 percent of the population has pizza at least once per month. With such variety of ingredients and preparation, there is also a wide range in the nutrition of pizzas.

The original pizza pie had few ingredients while providing an excellent contribution to a healthy diet. The traditional Margherita-style pizza consists of a basic crust topped with tomato, mozzarella cheese and basil. A popular belief is that the dish was created with the colors of the Italian flag to honor a visit to Naples by Queen Margherita, the wife of King Umberto of Italy, in 1889.

When trying to order healthy, it can be difficult to determine the nutrition of pizza, considering that added ingredients like pepperoni and sausage can be high in fat and sodium. In studies involving children and adolescents, pizza consumption was associated with high intakes of saturated fat and sodium. When pizza was eaten as a snack or from a fast food restaurant, it had the most negative impact on health.

But when "fast food" is being considered as a meal option for the sake of convenience, pizza can be a reasonable choice if one pays attention to the restaurant and its menu offerings. Kevin Johnson, a contributor to Fast Food Menu Prices, provides a comprehensive review of pizza chains that offer healthy options, including Domino's, Papa John's, Pizza Hut, CiCi's and Little Caesers. These restaurants make the nutrition content of products available to the public.

The larger chains often do not have the more healthy Margherita style of pizza offered on their menus, but two rapidly growing restaurant groups are making it part of their menus.

The MOD Pizza restaurants feature custom-made pizzas, including the healthy Margherita option. The company started in Seattle, Washington, and currently has restaurants in Washington, Oregon, California, Arizona, Colorado and Texas with plans to expand into other markets. The pizza features a stamped, thin crust that is baked in a gas-fired oven.

Another growing chain is Anthony's Coal Fired Pizza, and this group currently has pizza locations in Delaware, Massachusetts, New York, Florida, New Jersey and Pennsylvania. The pizzas also have a thin crust and are rapidly baked in a custom-built coal-fire oven at a temperature of 800 degrees. And based on reports contained in TripAdvisor, the pizza apparently comes close to the original Italian Margherita variety: "Our friends from Italy really enjoy Anthony's. They say the pizza is better than what they get in Rome and Sardinia."

Anything other than a thin crust adds fat and up to 300 additional calories. While some pizza restaurants are offering more healthy versions, others are going the opposite direction. The Blind Onion, a smaller chain with restaurants in Oregon, Washington and Nevada, has a Margherita option, but without the thin crust.

A unique feature of the pizza is the unusual crust consisting of baguette dough — thick and soft with a twisty crisp outer ring. The outer-ring crust remains are intended to be dipped in honey or ranch dressing, sauces not traditionally part of a pizza. The serving of honey adds an additional 200 calories and the ranch another 200, along with added fat. This changes a healthy meal option to a not-so-healthy one.

A Margherita pizza alone does not provide adequate nutrition to be considered an ideal meal and is deficient in micronutrients iron, zinc and iodine, and vitamins C and B12. However, with the options of whole-grain crust and toppings such as spinach or other vegetables, a simple pizza can be a healthy meal. The Mayo Clinic even offers this option among their healthy lifestyle recipes.

So when it comes to pizza, do so in the Italian tradition — Mangia! Mangia! (Eat! Eat!) Just remember to make it healthy and simple.