Eating insects could help save the planet 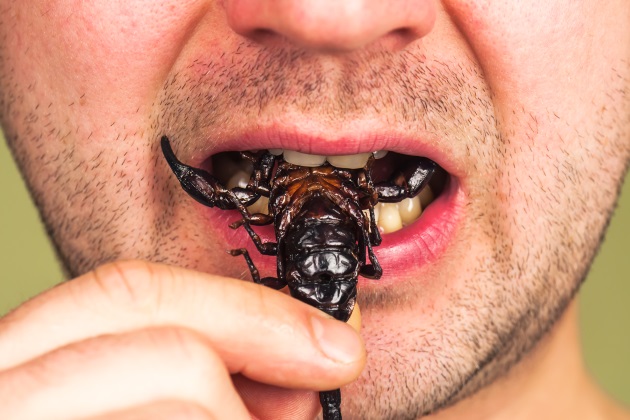 If predictions from United Nations food scientists are right, menus of the future might include such dishes as stink bug stew, cockroach canapés and mashed mealworms.

Scoff — or gag — if you will, but edible insects could well serve to supplement the human diet in a world increasingly threatened by skyrocketing population growth and a steadily shrinking food supply.

A report issued in August 2019 by the United Nations Intergovernmental Panel on Climate Change (IPCC) confirmed that land and water resources around the globe are being exploited at unprecedented rates, threatening the ability of humanity to feed itself. The report, prepared by 100 experts from 52 countries, warned that climate change would exacerbate the dangers as extreme weather threatens to disrupt global food supplies.

The report suggested that addressing the crisis would require a reevaluation of land use and agriculture as well as consumer behavior.

Authors emphasized the need to reduce meat consumption — and trumpeted the cause for more high-protein meat alternatives. The report makes a particularly good case for the consumption of insects.

Insects are rich in protein and fiber and possess similar levels of amino acids and omega-3 fats similar to those found in meat and fish. Insects such as crickets, mealworms, grasshoppers and caterpillars, among many others, are healthy, currently plentiful food options.

The UN estimates that 2 billion people, roughly a quarter of the world’s population, eat a variety of bugs as part of their standard diet. Grubs and termites, eaten both raw and roasted, are favorites in tropical regions, while water bugs and weaver ant larvae shaken from mango trees are staples in northern Thailand.

More than 2,000 insect species worldwide have been identified as edible, from leafhoppers to agave worms — with the most popular globally being crickets, followed by beetles, caterpillars and grubs.

The IPPC report argues that if people in the developed world could get over the “disgust factor,” a strong edible insect industry could help reduce world hunger and malnutrition. There is some evidence that food technology companies are taking the task to hand.

Texas-based Aspire Food Group is about to build several automated cricket production facilities where the insects are dry-roasted whole for snacks or milled into powder. Many other companies are developing insect-based products, such as protein bars, powders, shakes and oils.

Bugs also don’t require much nurturing and space to develop in commercial quantities and they generate far fewer greenhouse gasses than traditional livestock – a plus for the environment.

A leading market research firm pegs the valuation of today’s worldwide insect trade at $607 million annually and projects it to reach $1.8 billion by 2023. The bug business is centered in the Asia-Pacific region, led by Thailand, China and South Korea.

North America, however, is cited as the fastest growing regional market for edible insects, with Mexico leading the charge. According to the United Nations Food and Agriculture Organization (FAO), Mexico is home to the greatest variety of edible insects in the world (549) — and a bug-eating tradition that dates back to pre-colonial times.

Development of a viable and robust industry to farm and process edible insect products couldn’t come at a more crucial moment. Like so many living species nowadays, the world’s insect population is threatened. A lengthy article in Britain’s The Guardian newspaper grimly forecasts an “insect apocalypse,” owing to pesticides, pollution and habitat changes. “If insects were to vanish,” it concludes, “the environment would collapse into chaos.”