E-scooters: A blessing or a curse? 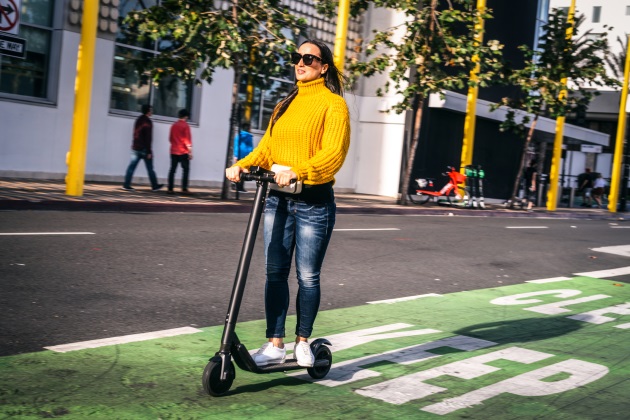 Once serving only as children’s toys, scooters have taken on a new life these days in cities across America. Powered by compact lithium-ion batteries, these stubby little two-wheelers have become the latest adult solution to urban congestion.

E-scooters have become fixtures in more than 100 major cities — from San Francisco to Nashville — and are quickly gaining on usage of other popular “shared micro-mobility” options such as station-based and dockless bikes.

According to the National Association of City Transportation Officials, Americans took 38.5 million trips on shared e-scooters in 2018. Those rides accounted for almost half of the 84 million trips taken aboard all shared vehicles.

The popularity of e-scooters is understandable. Foremost, they are easy and fun to ride. Eco-sensitive riders laud the fact that they produce no emissions and constitute a minimal carbon footprint. Optimally, too, they can help reduce private auto and taxi use — all helping to ease congestion and pollution.

Nonetheless, the massive influx of e-scooters has created a groundswell of controversy. Critics cite safety issues, decrying scooters as risky to both riders and pedestrians. And municipalities across the country have been caught flat-footed trying to establish regulations for their use — a number of them banning the vehicles entirely.

It all began in late 2017 when a startup called Bird introduced an app-enabled e-scooter rental service in the California beachside city of Santa Monica. The scooters, mass produced in China, proved so popular that Bird moved on to other cities, and in less than a year had reached a $1 billion valuation — the fastest that a U.S. company has ever done so. The company is now worth twice that and has provided more than 10 million rides in 100+ cities in America and abroad.

San Francisco-based competitor Lime is nearly matching Bird’s growth, while ride-hailing titans Uber and Lyft and automaker Ford have made major investments in scooters —ushering in something of a “micro-mobility revolution” and in turn literally flooding city streets everywhere with scooters.

To rent a scooter, adult customers unlock them for $1 each ride using a smartphone app, then typically pay 15 cents per minute of use. Most scooters can reach speeds of 15-20 mph and have a range of 20-30 miles per charge.

Scooter companies require users to agree to terms of service certifying they are at least 18 years old and require users to upload a photo of a driver’s license and scan the barcode on the back. Renters signing Bird or Lime rental agreements automatically relieve the companies of any liability — so it behooves renters to consult with their auto and homeowner insurance companies regarding coverage.

Scooter companies don’t provide docks like most bike-sharing services, so their scooters are usually just abandoned wherever a ride ends.

At night, company employees or contract workers round the scooters up, charge them and return them to service. This doesn’t always work as planned, however, and pedestrians and residents resent having scooters left on sidewalks and in the streets, which they see as both unsightly and hazardous.

In some cities, angry detractors have protested the influx by stuffing abandoned scooters in dumpsters, setting them on fire, and smearing them with dog poop.

Although they are trying, city officials have been flustered in efforts to regulate scooters. Contentious rollouts, staged without even consulting local leaders, have led to scooters being banned — either temporarily or permanently — in a number of cities including San Francisco; Denver; Indianapolis; New York (Manhattan); Nashville; Chattanooga; and Columbia, South Carolina.

Others have imposed strict, though inconsistent, regulations on speed limits, parking, nighttime riding and helmet use. Some cities have ruled it illegal to ride scooters on sidewalks, while others have banned their use on city streets.

Rider safety is a universal concern, and reports from across the country are far from reassuring, pointing to a surge of serious accidents since e-scooters were introduced. An ABC News report last June noted 11 scooter-related fatalities and more than 1,500 injuries nationwide since 2018. A third of those injured suffered fractures and 40% had head trauma.

Safety experts say the vehicles are so fun and easy to ride that they promote a false sense of security. The scooters’ small wheels are no match for rough pavement and potholes and can lead to riders losing control.

In commentary accompanying a study of scooter safety published in the journal JAMA Network Open, Dr. Frederick Rivara, a professor at the University of Washington, says the vehicles can play a viable role in the urban transportation mix — if properly regulated and if riders are mandated to wear helmets.

“Electric scooters are here to stay,” Rivara says, “and the problem is only going to get worse. So action is needed now.”