E-bikes grow in popularity around the world 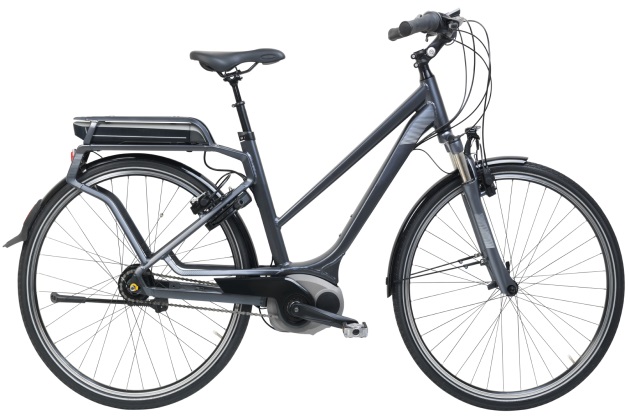 Perhaps you can’t afford a Tesla, but you’d still like to avoid high gas prices and polluting the atmosphere. Then you should consider another kind of electric vehicle that’s been gaining momentum worldwide: the e-bike.

An e-bike (short for electric bicycle) is essentially a standard bicycle fitted with an ingeniously integrated propulsion system consisting of a mini electric motor powered by a rechargeable lithium-ion battery.

The majority of e-bikes are pedal-assist models — meaning that the motor helps the rider pedal depending on the level of assistance desired. Simply tap the handlebar-mounted throttle button and a tiny computer signals the motor to provide varying amounts of pedal power.

Most e-bikes can achieve speeds of up to 20 miles per hour and, depending on the weight of the cyclist and the terrain, can travel from 20 to 70 miles on a single charge. Batteries can be removed easily, plugged into a regular home outlet and charged in about three hours.

Pedal-assist bikes are available in a variety of categories to appeal to every type of rider — from casual cyclists and campground cruisers to mountain bikers and serious commuters.

Electric cars account for about 1 percent of global vehicle sales with an estimated 1.15 million expected to be sold this year. Compare that with the 35 million e-bikes predicted to be purchased this year, according to the consulting firm Navigant.

Led by China, Japan, India and a number of European countries, the industry sold $77.1 million in e-bikes in 2017 — up 91 percent from the previous year, as reported by market researcher NPD Group, and sales have grown more than eightfold since 2014.

While the U.S. lags the rest of the worldwhen it comes to e-bikes, that’s rapidly changing. According to PeopleForBikes, an advocacy and industry trade group, e-bike sales were fewer than 100,000 in the U.S. in 2012 but are projected to climb to 400,000 this year.

As the number of bike lanes and paths increases across the country, more and more Americans are beginning to recognize the reasoning and advantages of e-biking — for both recreation and commuting.

Exposure to e-bikes is expanding rapidly as most bicycle retailers now carry them and the number of rental outlets is growing as well.

One of the appeals pushing sales is the low operating cost (four times less than the average automobile) that soon amortizes the relatively high purchase price on an e-bike. Plus, there are no costly licensing and insurance requirements and no use restrictions either for the typical pedal-assisted models — wherever a traditional bike can go, so can an e-bike. It is important to note as well that the combustion-free nature of an e-bike has particular appeal to the growing number of eco-conscious Americans.

In an e-bike review appearing in a recent issue of Bloomberg Businessweek, Josh Petri notes, "There’s no other way to put this: the e-bike is stupid fun to ride. Step on the pedals, and soon enough you’ll be cruising along with all the joy of two wheels but none of the drawbacks — you know, things like physical exertion and sweat."