Don’t get shot: Dealing with police during a traffic stop 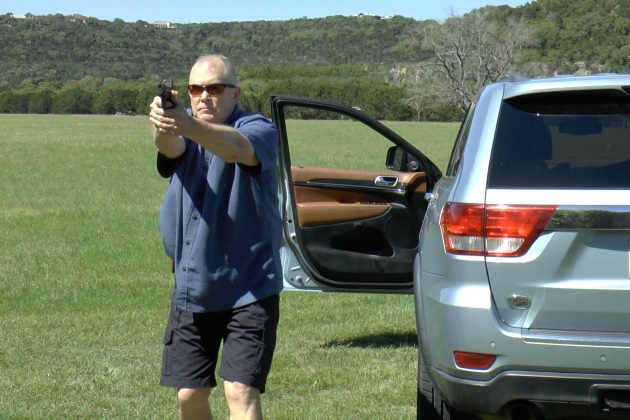 On March 6, 2014, in Opelika, Alabama, Air Force Airman 1st Class Michael Davidson was travelling on Interstate 85 headed to his next duty assignment at Seymour Johnson Air Force Base in North Carolina.

While driving through Opelika, Davidson (who was driving an SUV) lightly sideswiped a tractor-trailer. Both drivers pulled over to report the accident.

Coincidently, just prior to this accident the Opelika Police Department had received a phone call about an SUV driving erratically along I-85 and Opelika police officer Phillip Hancock was in the area attempting to locate the erratic driver.

When the accident call came in, Officer Hancock quickly arrived at the scene and pulled up behind the two vehicles just as they both exited the roadway. The police dashcam shows Airman Davidson attempting to get out of his vehicle; however, because he had pulled his SUV off the road shoulder, the vehicle was tilted slightly to the right. This caused to door to close as the Airman tried to exit.

As he struggled with the door, Airman Davidson made a movement with his right arm that is similar to someone drawing a weapon — and apparently similar to removing a wallet from your back pocket since that is what the Airman was actually doing (see picture 1 below).

However, as Davidson exited the vehicle, he held the wallet in an unusual manner in both hands, pointing toward Officer Hancock (see picture 2). In the video, Airman Davidson looks exactly like someone pointing a weapon as though he was preparing to shoot. It would be a gross overreaction on your part to draw a weapon while standing in a cash register line at a store when the person in front of you reached for their wallet. Their actions would be consistent with paying for merchandise given the totality of the circumstances.

When dealing with an uncertain situation, it is perfectly reasonable for an officer to be acutely aware of the ability, or inability, to see a person's hands to ensure he is not clutching or reaching for a weapon. However, yelling show me your hands and then shooting when the person does exactly that is obviously problematic as we see in this incident.

Officer Hancock yelling “show me your hands” provided Davidson no effective warning that he was about to shoot him. Davidson later stated that he was in fact showing his hands just as the officer commanded.

In this incident, Davidson’s movement with his right hand and then extending his arms while clutching his black wallet with both hands clearly made Officer Hancock believe that Davidson was holding a firearm and advancing toward him. How quickly can someone exit a vehicle and start shooting?

We did an experiment to determine how fast someone could do this. I exited my vehicle while simultaneously drawing my pistol from a strong-side holster and firing three rounds while advancing.

From the time someone could see that I had a pistol in my hand until I began firing was a 0.81 second average time for five runs. My fastest time to begin shooting was 0.47 seconds. My average split time between shots was 0.20 seconds as I advanced toward the remote camera. You can see the video at the top of this article.

Many studies have shown that the average person’s reaction time to a stimulus is between 0.7 and 1.5 seconds or longer depending upon the circumstances. Added to the reaction time is the time necessary to complete the physical action the stimulus requires (e.g., pushing the brake on a car or drawing a pistol). As we see in my experiment, the time between your ability to recognize that someone has a pistol until that person begins shooting can be as short as 0.47 seconds.

Were Officer Hancock’s actions reasonable given the totality of the circumstances? Look at picture 3 below. The left picture is of Airman Davidson drawing his wallet; the right picture is me drawing a pistol. Do the actions look similar?

In January 2017, the United States Court of Appeals for the Eleventh Circuit upheld a lower court's ruling that Officer Hancock acted reasonably when he shot Davidson. "After careful consideration and review of a video recording of the shooting, viewing the evidence in the light most favorable to Davidson, we conclude that a reasonable officer in Hancock's position would have feared for his life," the three-judge panel wrote in the ruling.

The court’s decision hinged on a single issue: “whether, given the circumstances, Davidson would have appeared to reasonable police officers to have been gravely dangerous.” The Eleventh Circuit justices clearly believed that was the case.

Something people often misunderstand is that the law does not require us to make perfect decisions in a self-defense incident nor does it demand that the threat against which we defend ourselves be an actual threat. The law demands that you must have a reasonably objective belief that you are responding to an imminent deadly threat.

Many states have an apparent danger clause which aligns with the concept that in a given set of circumstances, an antagonist’s furtive movement could cross the threshold of apparent danger in the mind of a reasonable and prudent person. If you wait to see the gun, you may well see what comes out of it as we demonstrated in our experiment.

In a separate case with similar circumstances, the Fifth Circuit held in Young v. City of Killeen, Tex.: "If Young's movements gave (Police Officer) Olson cause to believe that there was a threat of serious physical harm, Olson's use of deadly force was not a constitutional violation.... We hold that no right is guaranteed by federal law that one will be free from circumstances where he will be endangered by the misinterpretation of his acts."

So how should you conduct yourself during a traffic stop to lessen chances that your actions will be perceived as a potentially deadly threat?

Stay in your vehicle. A well-known tactic of police killers at traffic stops is to quickly exit the vehicle and advance on the officer while shooting.

Bank robbers, terrorists, and other felons have been doing this since at least the late 1970’s and probably much earlier. Although Airman Davidson probably did not know this, his actions mimicked this tactic.

Roll down the driver’s window and place your hands on the steering wheel. Don’t worry about turning on an interior light — at night the officer will light up your vehicle with their spotlight anyway, so this is unnecessary. However, your movement can increase the officer’s suspicion that you are doing something nefarious.

Wait for the officer’s further instructions. This was truly a tragic and very unfortunate event — nothing in this article should be seen as placing blame on either Airman Davidson or Officer Hancock.

Police officers don’t want to get shot nor do they want to shoot innocent citizens. In reality, both parties want the same outcome. Ensure that your actions cannot be mistaken for threatening behavior when you interact with the police during a traffic stop.