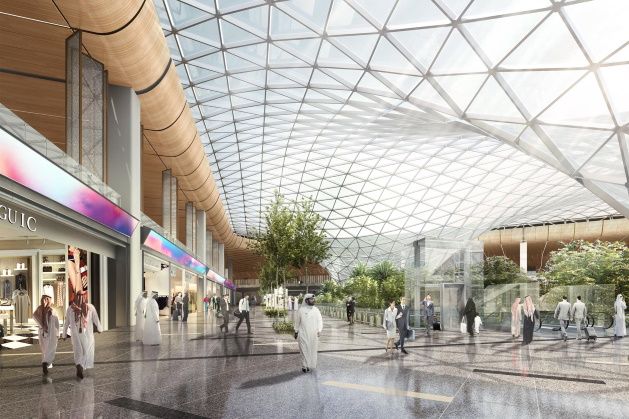 Doha’s Hamad International Airport, currently ranked fourth-best in the world by Slytrax, is set to continue its push for dominance in the Gulf region following the announcement of the next stage of its expansion at the Cityscape Qatar event held near the end of October.

Despite the ongoing blockade of flights between Qatar and both Saudi Arabia and the United Arab Emirates, which were among the busiest out of Doha, the airport is ready to increase its capacity and add major passenger-pleasing amenities to help it stand out from the crowd.

Split over two phases, the initial stage of work, known as Phase A, is likely to be completed in early 2020. This will include the addition of a central concourse linking concourses D and E. This will add nine new widebody gates in the central area and allow the airport’s capacity to increase to 53 million passengers per year.

Phase B will add extensions to concourses D and E, raising capacity to 60 million passengers per year, and will add 1,720 square meters of retail spaces and leisure attractions.

Among these will be a world-class artwork collection, and the centerpiece 10,000 square-meter tropical garden in the central concourse. This will feature a 268 square-meter water feature as the main attraction. The garden will include flora from sustainable forests around the world.

A new Al Mourjan Lounge for Qatar Airways will be added above the new retail space with views over the tropical garden and the latest in spas, food, drive and business amenities.

Hamad International opened in 2014, replacing the older Doha International Airport as the country’s main gateway, and hub of Qatar Airways. Since opening the airport’s capacity has been capped at around 23 million passengers per year.

With neighbors Abu Dhabi Airport and Dubai International Airport having 30 million and 90 million passenger capacities respectively, and airports at Bahrain and Dubai World Central growing in stature, Doha is aiming to position itself ahead its rivals — alongside Qatar Airways — to become a more attractive option in the region.

Qatar Airways Group Chief Executive Akbar Al Baker said: “The expansion of Hamad International Airport is a vital part of the future success of the Qatar Airways Group, and of course of the country’s preparations to host the 2022 World Cup and beyond. It is also a strong sign that Qatar’s economy is robust and acts as a further economic stimulus, providing excellent opportunities for local and international contractors.”

He added: “Plans for the phase two expansion focuses on capacity and passenger experience – we want to provide even better airport journeys to more people around the world. The expansion will allow us to do this.”

As well as the more visual aspects of the larger terminal and its added amenities, Doha is also becoming a more sustainable airport. It is the first in the region to be accredited a four-star Global Sustainability Assessment System rating, alongside a LEED Silver certification for the innovative ways its terminal building handles energy efficiency.

The addition of the new tropical area bears some resemblance to the new Singapore Changi Jewel attraction, and perhaps this hints at a new trend of airport terminal design, or simply a case of emulating the best in order to be successful.