Does military hold the solution to a shortage of game officials? 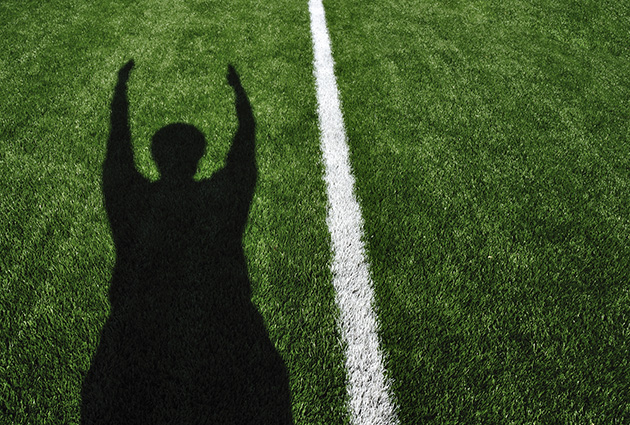 When they're doing their job well, you shouldn't notice them. Recently, though, game officials are barely visible because they're in short supply.

High school sporting events across the country are suffering from a dwindling corps of game officials across nearly all sports and seasons. In some areas, subvarsity schedules are being shortened or canceled. In many places, varsity games are spread to other nights in order to allow for enough officials.

In football, for instance, that removes some of the luster of Friday night lights. It also can hamper education for student-athletes, who instead of being allowed to sleep in on Saturdays — and take the day off — after a late Friday game instead must be awake early the next morning and focus on class lectures and schoolwork after a late Thursday game.

The solution looks simple, according to Barry Mano, the founder and president of the National Association of Sports Officials: "Do fewer games, or get more warm bodies." Though the reality is more complicated than that, he said.

Michael Fitch, executive director of the Texas Association of Sports Officials, sees a bigger issue with retention rather than recruiting.

"We fail to retain for a number of reasons, including abuse from coaches, players and fans, too much of a commitment of time and lack of sufficient compensation," Fitch said.

The situation has been described as a "crisis" in Oregon, where Brad Garrett of the Oregon School Activities Association told The Philomath Express newspaper that "the cup is emptying faster than we can fill it."

"Critical" is also a word used to describe circumstances in Tennessee, where the number of registered officials dropped by almost 300 in a single year, Gene Menees of the Tennessee Secondary School Athletic Association reported to TV station WTVF.

Gender diversity is also a goal of that program. That's a collateral benefit in Texas, where Katie Gore serves as the only female football game official in the Abilene area. The attorney followed her father into officiating.

"I feel like my gender hasn't even really been made a big deal, which is good," Gore told KTXS-TV.

Fitch of TASO, which counts Gore among its members, pointed out that recruiting youth can be more challenging than recruiting gender. "We continue to look for better ways to recruit younger members. Currently, we do not have enough young officials to replace those that will be retiring over the next few years," he said via email.

Coaches often tell players who are fatigued to press on, to push through the exhaustion. It's easy to say the games must go on, but that's harder to accomplish without the men and women who make sure the rules are followed and the games are organized.

The participants in those sports benefit directly from the time invested by those officials. In its recent participation report on the 2015-16 school year, the National Federation of State High School Associations stated that high school athletic participation marked an increase for the 27th consecutive year. More than 7.8 million athletes participated in high school sports.

That would seem to provide a stable pool of potential game officials, seeing as how they're already versed in the rules and language of their chosen sports. But Mano said the facts contradict that.

"You'd think that logic is there, but it's not," he said in a phone interview.

"Social media has not been a big factor in recruiting," Fitch said. "Our best recruiting technique is when a member brings in a friend, co-worker, etc."

Mano sees another — and perhaps unorthodox — target field: military veterans. They're steeped in training and leadership.

"We're in the business of delivering the word 'no,'" Mano said. "They can deliver that message, deal with the aftermath of that message and serve like you'd expect judges to serve."

He added that he thinks public service announcements during pro and college sporting events would reach out to fans who are absorbed into sports to the point of knowing and understanding details of the rules.

Nationwide, abuse of game officials has been documented more frequently, whether by video or official complaints. One of the most-publicized incidents in recent years occurred in Texas, where two players for a San Antonio high school football team intentionally blindsided a game official during action. An assistant coach pleaded guilty to a misdemeanor for his role in the attack.

The dangers of officiating have a negative effect on recruiting, Mano said. Still, the industry offers many tangible benefits besides income.

"Officiating teaches three things: fair-mindedness, accountability and decisiveness," Mano said. "Those are skills for a lifetime."