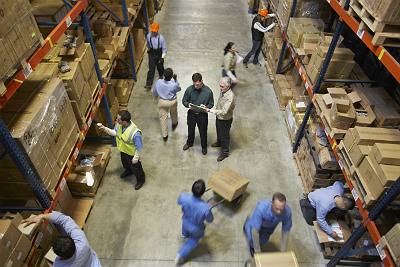 Not long ago, the typical warehouse operated eight hours per day and five days per week. That was a normal business schedule, and nobody expected warehousing to be any different. Today, many distribution operations operate with a 24/7 schedule, and warehouses that work only 40 hours are increasingly rare.

Most of our ideas about scheduling people in distribution centers are monuments to the short two centuries of our industrial age. From the earliest days of manufacturing, managers assumed that workers needed a set schedule over six days per week. As industry became more efficient and prosperous, the work week gradually shortened from six long days down to five days with eight-hour shifts.

Yet, for most of human history, eight-hour work schedules were not common at all.

Even today, the schedule for farmers is governed by season and weather. The eight-hour day is unknown. At the peak of harvest it is longer, and in the dead of winter it may be shorter. When man's prime occupation was to hunt or fish, the workday depended on good luck, and in any case it was seldom an eight-hour schedule.

A century ago, most workers lived close to their job. Traveling between work and home was relatively easy. For some workers today, the journey between home and workplace is the most tiring task of the day.

Why 40 hours is no longer enough

Thanks to Amazon and other e-commerce giants, consumers now expect their online purchases to be delivered faster than ever before, which means those responsible for shipping and delivery are forced to operate around the clock.

Another force pushing against the 40-hour week is the need to improve asset productivity. When capital is not available to purchase additional buildings and equipment, the easiest way to extend the life of assets is to use them more intensively. Moving to multishifts may be the best answer to increasing asset productivity.

The fastest disappearing act in warehousing is the operation that maintains a 40-hour work week. Customer expectations today cannot be met with the traditional work schedule.

At the same time, we recognize the significant difficulty of managing people on a second or third shift. It is on these late shifts where we find the greatest frequency of accidents, substance abuse and disciplinary issues.

Three of the worst accidents in 20th-century history were traceable to worker fatigue on a late-night work schedule. These were the two nuclear accidents at Three Mile Island in Pennsylvania and Chernobyl in the Soviet Union, and the explosion of the Challenger space capsule in Florida.

A major challenge for warehouse managers today is to maintain quality and motivation while operating distribution centers on night shifts.

A new kind of work week

As you consider alternates to the 5/8 week, consider the change in the nature of many warehouse jobs during the past several decades. There was a time when most warehouse work was physically demanding, but many of these jobs are easier than ever before. Robotics, unitization and improved ergonomics have combined to reduce physical effort in warehouse work.

Decades ago, an order picker may have been exhausted at the end of eight hours, but today that job can be extended to 10 or even 12 hours without undue fatigue. Another change is the amount of clerical work done on the warehouse floor. Today's warehouse worker is likely to operate a data terminal as well as a lift truck.

Given these conditions, you can be creative in introducing alternates to the 5/8 week. One option with proven popularity is the 4/10 week. This schedule is popular with hourly workers, because everybody has a three-day break that eliminates one day of commuting between home and work.

But what if customer service demands will not permit your warehouse to operate on a schedule of only four days per week?

How can you provide a 4/10 work schedule and still keep the warehouse open for 80 hours each week? One answer is a first shift that works 10 hours per day Wednesday through Saturday. A second shift starts on Sunday and works through Wednesday. On Wednesday only, workers from both shifts report in, and one of those shifts moves from day to night on that day only.

Some warehouse operations want to attract people who are eager to have part-time work to supplement another job or to help finance their education. These people may be attracted to a job on nights and weekends when they have available time. One option is to offer part-time workers a 12-hour shift on Saturday and Sunday, and eight-hour work schedules for two evenings during the week.

Other operators may want to offer shorter hours to part-time workers who do not want a full-time job. One example is a 5/6 schedule, the part-time group working five days and shifts of just six hours in length.

There are countless variations to the schedules that can be developed, once you recognize that the traditional 5/8 work week can be discarded. The question of whether shifts of varying length would be popular with your workforce is one which should be tested by asking people if they would like to try.

Many managers worry the changes described above will be unpopular and even disruptive. Yet there is evidence that the majority of hourly workers would welcome a job that doesn't call for five eight-hour days. If you doubt this, ask the people working in your warehouse.