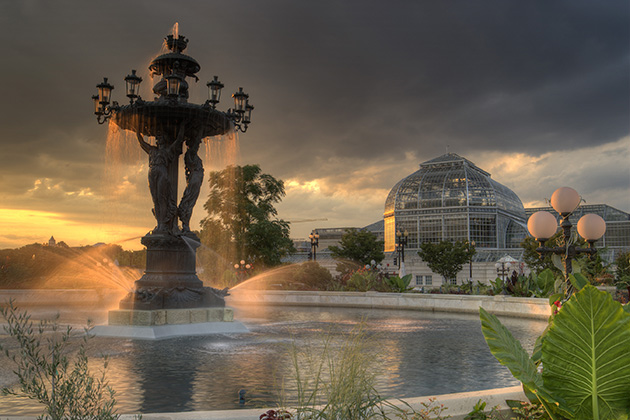 The United States Botanic Garden is a serene and scenic green space in the shadow of the U.S. Capitol.

If poet Ralph Waldo Emerson was right when he said "the earth laughs in flowers," then get ready for a chorus of laughter as botanical gardens across the nation burst forth in blossom this spring.

The cultivation of ornamental gardens goes back a long time. The Hanging Gardens of Babylon, for example, are one of the Seven Wonders of the Ancient World. Laid out by French King Louis XIII in the 1630s, the enchanting Gardens of Versailles are seen by many experts as having set the world stage for formal gardens.

Here in the U.S., we can thank three early presidents for the establishment of the country's first public botanical gardens in 1820. George Washington, Thomas Jefferson and James Madison all were instrumental in creating what would become the United States Botanic Garden on the National Mall in Washington, D.C.

You may notice that some gardens are named botanic and others botanical. No worries, because the two words are synonymous. Botanical, however, is the more common usage.

In addition to public botanical gardens — found in nearly every state — there are formerly private gardens at the estates of some of America's business and industrial pioneers that are now open for all to enjoy. We'll visit a couple of them in the article to follow, along with a roster of other top gardens across the country — starting in the nation's capital.

Washington, Jefferson and Madison first floated the idea of a garden on the National Mall in the late 1700s. It was created in 1820, formally established in 1850 and eventually moved to its current location in 1933.

It has remained a small garden, occupying just a few square blocks, but it is a serene and scenic green space in the shadow of the U.S. Capitol, and it provides a home to more than 10,000 plant specimens.

One of the world's foremost botanical gardens, NYBG spans more than 250 acres including some 50 acres of old growth forestland and 50 acres of gardens. Collectively, it serves as a museum of more than a million species of living plants.

A National Historic Landmark now celebrating its 125th anniversary, NYBG is home to America's largest Victorian-era conservatory — the Enid A. Haupt Conservatory — where guests can explore both desert and tropical landscapes. The Garden's education programs in horticulture and plant science serve nearly a million people annually. 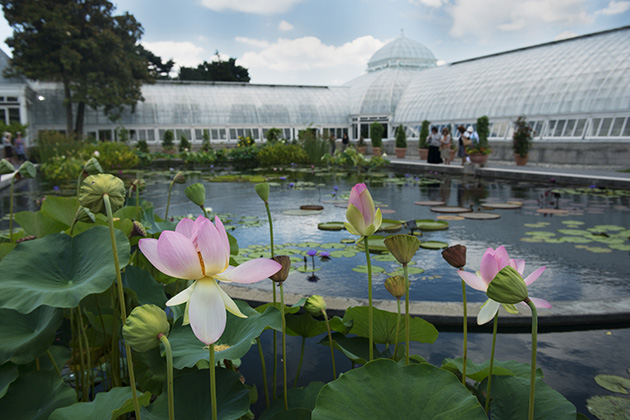 One of the world's foremost botanical gardens, the New York Botanical Garden spans more than 250 acres. In the background is the historic Victorian greenhouse.

Founded in 2007 on 300 waterfront acres skirting Boothbay Harbor, CMBG is the nation's newest major botanical garden. Its colorful array of pocket-theme gardens and brilliantly landscaped network of walking paths appear so mature that they seem much older.

A busy schedule of special events is aimed at achieving the Garden's mission to "inspire meaningful connections among people, plants and nature through horticulture, education and research."

Cheekwood originally served as the private residence of Nashville's Cheek family, founders of the Maxwell House coffee brand. Family descendants offered the house and grounds to local civic groups as a site for a botanical garden and art museum and opened it to the public in 1960.

Set on 55 acres, Cheekwood features 11 separate gardens, plus the Carell Woodland Sculpture Trail, a combination art and nature trail that can be enjoyed any time of year.

Lovingly maintained as a living legacy to founder Pierre S. DuPont, Longwood is one of the premier horticultural display gardens in the United States. The Gardens attract more than a million visitors a year.

Sprawling over 1,077 acres, this scenic combination of gardens, woodlands and meadows in the Brandywine Creek Valley is open to visitors year-round to enjoy exotic plants (both indoor and outdoor) and horticultural events and performances, as well as educational lectures, courses and workshops. 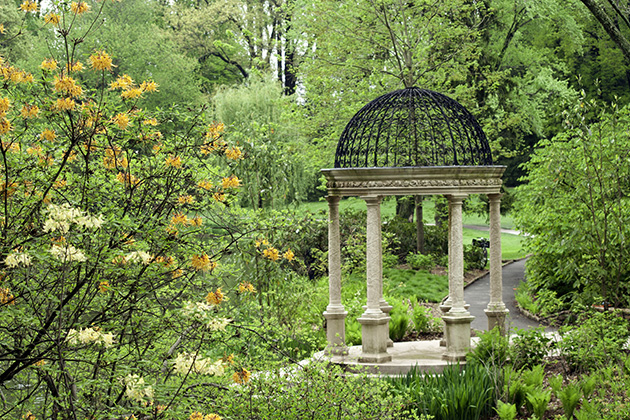 Completed in 1895, George Vanderbilt's 250-room chateau (America's largest house) is as impressive today as it was more than a century ago. The same can be said for the surrounding grounds and gardens, designed by Frederick Law Olmsted who also created New York City's Central Park.

Biltmore's lush landscape, a combination of forestland, meadows, waterways and both formal and informal gardens, is a living tribute to Olmsted's genius. Particularly notable here are the Rose Garden, featuring 250 varieties, and the Italian Garden with its elegant statuary and water features.

Spring is a popular time to visit — to experience the explosion of color — especially at the Azalea Garden.

Named for the late-great American botanist David Fairchild, this 83-acre garden is internationally recognized for its extensive collections of rare tropical plants including palms, cycads, flowering trees and vines.

Fairchild was a government botanist who traveled extensively to bring more than 20,000 plants to the United States, such as mangos, nectarines, dates, bamboos and flowering cherries. Many of his finds were transplanted in the garden, founded in the early 1930s by his friend Robert H. Montgomery, and opened to the public in 1938.

Fairchild scientists are devoted to conserving tropical plants, hoping to avoid extinction of threatened species and the denigration of their habitats.

Dallas' often-overlooked sibling city is home to one of the country's finest and most diverse botanical gardens. The 109-acre property features 22 specialized gardens, ranging from a cactus garden to a backyard vegetable garden. All in all, it is home to more than 2,500 species of plants.

Notable here is the Japanese Garden, where visitors can wander among koi ponds, stone bridges and waterfalls. Popular, too, is the 10,000-square-foot Rain Forest Conservatory, filled with more than 700 species of tropical plants. 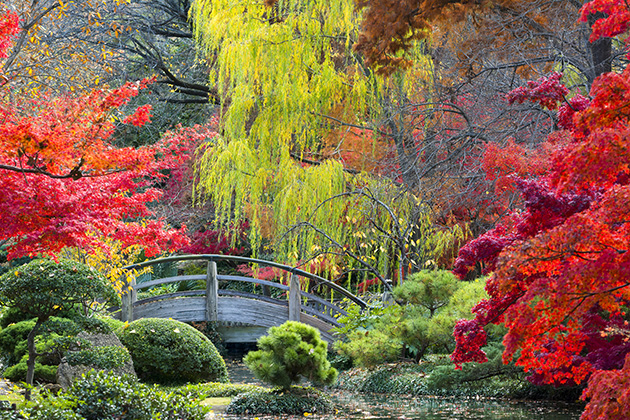 Moon Bridge in the Japanese Gardens during autumn at the Fort Worth Botanic Garden.

A stroll through this world-class desert garden with its five walking trails, permanent trailside exhibits and special events transforms the visitor experience into one of discovery and meaning about the Sonoran Desert and its plants.

In March 2017, the Garden will open a new butterfly exhibit that will incorporate a caterpillar nursery and emergence chamber to let visitors view all stages of a butterfly's life. Temperatures here can exceed 100 degrees most months of the year so don't forget a hat, sunscreen and sunglasses for your visit — plus a bottle or two of water.