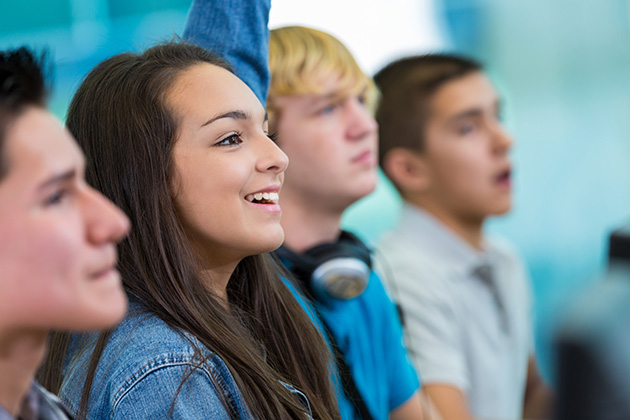 In a recent discussion with my high school ESL students about music, I asked them to relate experiences where music was used to help teach them an academic subject in school.

Nearly everyone had something to say about how important music was in their lives — as a way to concentrate, shift their mood, shut out the world, or make them dance. But when it came to education, about all they mentioned was the ABC song and rhythm to teach multiplication in a Waldorf school.

While it's quite likely that some of these teens had forgotten songs taught when they were young English learners, I was struck by the fact that they didn't have any more recent exposure to music in the classroom, especially given the central role music plays for them in the rest of their lives.

I must admit that, like my students, I associate music in the classroom with the lower grades. Since I started teaching in middle and high school, music in my classroom has basically boiled down to memorizing songs for holiday concerts and background for writing assignments.

For me and other teachers I know, incorporating songs into lessons for older students is daunting. One of my colleagues shared that she intended to work with music and asked students to suggest songs they like. Upon listening to them, she found nothing appropriate for class use and dumped her plan.

My main hesitation comes from the sheer quantity of material students need to learn — everything I do has to move them toward set attainment targets. Still, I've managed to use games, role playing and cartoon drawings with them, so I felt that I had no excuse in neglecting to use something as powerful as music.

A thesis by Drífa Sigurðardóttir, an Icelandic university student who recommended including songs to enhance grammar lessons, struck a chord with me. He could have been describing my class when he wrote, "During my practice teaching, I noticed that grammar was being taught through textbooks and handouts but never through songs. Many of the students seemed to dislike learning grammar and their attitudes were often very negative."

Grammar and vocabulary are definitely areas where my students need support, so incorporating songs wouldn't be a waste of time. My intermediate high schoolers were reviewing modals of possibility and certainty, so this became my starting point.

Many confuse the use of "can't" with ability and "may" with permission, which is understandable. The Billy Joel song, "You May be Right" came to mind as a good example to share with its lyrics "you may be right, I may be crazy, but it just may be a lunatic you're looking for ..."

Finding "can’t" when used to mean the opposite as "must" was more challenging. Just searching for a song with the word "can't" in the lyrics on my browser wasn't as useful as the New York Public library circulating song collection index, which allows you to search for keywords or phrases in the title or first line of a song.

For grammar, if a song using my target vocabulary doesn't come to mind quickly, I do a search for songs with the word I want to reinforce. Recently, I searched "despite," and lyrics.com gave me several choices.

I even got an unexpected lesson as the song I chose — Led Zeppelin's "Immigrant Song" — had the lyrics incorrectly written as "despite of" in the YouTube video. Fortunately, the band had sung it correctly. While I had to help my students find the error, when I had them write sentences with the link "despite," they all used it correctly.

Since it's a large investment of time and effort just to get them to use one word correctly, I wouldn't do this for each vocabulary word. Still, it's a good option for words they just don't seem to get.

With my students, I've taken the risk of using songs from my generation that most have never heard. Perhaps because the school where I teach is already alternative, they are curious, and these songs serve as sort of an ancient history lesson for them.

Even little kids' songs can work in certain situations. Recently, I had a group of teen learners trying to give examples of the passive tense, one got confused with the word "eaten," and I remembered a song my daughter learned in first grade, "I'm being swallowed by a Boa Constrictor." Not only did they get clear on the importance word placement has on who gets eaten, but they were also delighted by the song and kept singing it to themselves throughout the class period as they worked.

Admittedly, my approach may not work for all teens. Many teachers online recommend sticking with contemporary popular music for this age group.

"If the students really like the song and the artist, they become determined to understand," as per an article on the British Council website. "Even lower levels will be able to get something out of working with tricky songs where the language is way above their level of English."

To find suitable pop songs, busyteacher.org a great resource with more than 1,700 song worksheets submitted by teachers and organized by ESL level. Here you can also do a search for specific grammar forms or verb tenses. However, the song lyric worksheets are mixed in with other kinds of worksheets.

I've found it much easier to start with a song then adapt a lesson around it, or take advantage of what's shared by teachers online like Sandra Heyer, who has clearly done her research to develop several comprehensive lesson plans around popular songs. Many of her plans include the story behind the song, which students find fascinating.

My experiment has had its glitches, but now I can personally attest to the value of bringing songs into the classroom, especially in terms of capturing ESL students' attention, helping them understand how to use the language and just giving them a mental break from their intense academic load.