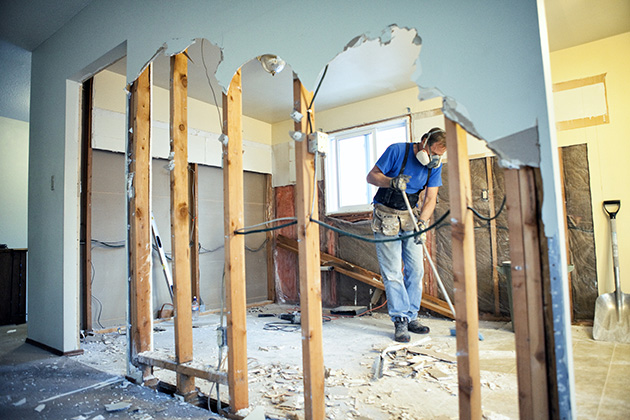 As more long-term homeowners make the decision to stick with the home they have, they are undertaking larger-scale remodeling projects, such as complete room renovations or additions.

Due to the complexity of these changes, more homeowners are hiring professionals to assist with or do the entire project for them. While that's great for business, it is pushing out wait times as project backlogs begin to pile up.

Requests for larger projects are driving this demand for professional services. The AIA survey shows a net increase of 7 percent in additions and alterations in 2017 compared to 2016, and a 6 percent increase in kitchen and bath remodeling.

The survey also found that while the number and size of bathrooms on average remained stable, demand increased last year for projects that require substantial renovations, such as larger walk-in showers and radiant heated floors. Kitchens, on the hand, have been increasing in size and in the number of food storage or preparation areas, with double islands becoming more standard features. In addition, outdoor kitchens continue to grow in popularity.

According to the 2017 Remodeling Impact Report, jointly produced by the National Association of Realtors and the National Association of the Remodeling Industry, complete kitchen renovations and bathroom renovations, as well as adding a bathroom, are among the top projects undertaken by homeowners. Why? Because of the satisfaction they receive when the project is completed, the appeal to prospective buyers and the value they add to a home at resale.

Unlike in previous years when upgrades were more common, homeowners undertaking these larger, more complex projects are enlisting the help of professionals either to handle the project completely or to do the majority of the work on the project.

In 2015, 28 percent of homeowners participating in the NAR/NARI Impact survey had hired a professional for the entire job, and 20 percent had hired them to do the labor. Those numbers increased to 32 percent and 21 percent, respectively, in 2017, with the proportion of those choosing to do it themselves slipping slightly from 14 percent to 13 percent.

This increased demand has put pressure on remodelers, who like others in the construction industry are challenged by a shortage of skilled labor and the rising cost of materials. The NAHB remodeling index for the fourth quarter showed a six-point spike in the number of firms reporting longer backlogs. Similarly, the AIA survey indicates backlogs increasing from 4.4 months in the third quarter of 2017 to 4.9 months in the fourth quarter.

Those lag times will most likely grow as remodelers head into their busiest time of the year this spring.