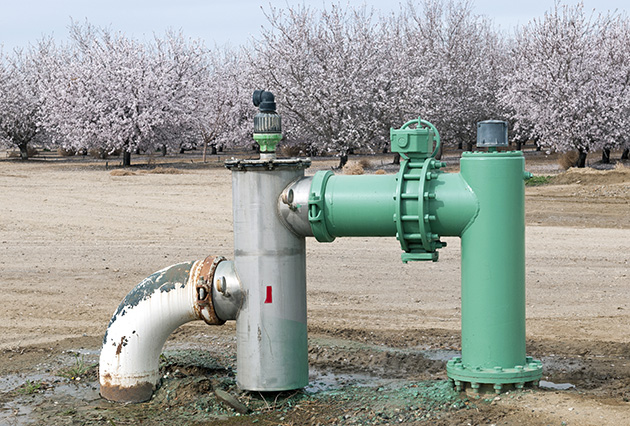 Farming choices in California have veered toward especially "thirsty" crops, like almonds.

On Aug. 28, the Central Basin Water Board voted, 5-2, to postpone a decision on California Gov. Jerry Brown's proposed Delta Tunnel project (also known as California Water Fix) until rate impacts of the project can be clarified. Specifically, officials are concerned about the burden citizens from poorer areas of Los Angeles County will bear without seeing an increase of water supplies.

The $25 billion California Water Fix proposes to construct several massive underground tunnels that will update California's water infrastructure by diverting more water, making the delivery more reliable and improving environmental conditions. Although the project claims it will have environmental benefits and is an "economically smart solution to our state's water problem," it has received resounding criticism from environmental groups.

Additionally, dozens of cities across California have joined to sue the state for impending damages they expect the construction project will create. Finally, a much needed cost-benefit analysis put out by the University of the Pacific in 2016 states that even if "ecological cost" is set to zero, the project's expenses still outweigh its economic benefits.

The ecological importance of the once-mighty estuary of the San Francisco Bay is almost unfathomable.

More than 30 million acre feet of water drain through 1,100 square miles that comprise California's vast delta, and its location on the Pacific Flyway makes the marsh a haven for migratory waterfowl, fish and marine mammals. Subsidence and increasing salinity continue to plague the Delta region, and experts assert that the way to save it is to "is to pump less and only during high spring flows, and to strengthen levees and restore marshlands."

The massive pumping of freshwater away from its natural journey through the Delta toward the sea is by far the most controversial use of California's water. Scrutinizing the distribution of its wealth from mountain sources to urban and agricultural areas across the state sheds light on the true beneficiaries of this plan.

The USGS reports that some 83 percent of the 7.5 million acre feet of water exported through the Delta is used agricultural purposes. Although it earns a hefty $21 billion each year, agriculture accounts for only 2 percent of California's gross state product. Nevertheless, millions of acre feet of water are shipped southward via a vast network of reservoirs and canals.

The maze of historical water rights and current infrastructure battles make critical analysis of this issue difficult to navigate, but it's clear there are two specific regions whose water use and, by extension, farming practices beg further attention.

Of the many agricultural regions in California, Westland Water District and various water districts in Kern County stand out as principal beneficiaries of Northern California's water exports. Together they purchase more than 2 million acre feet of Delta water each year and — in the case of Kern County agricultural moguls Stewart and Lydia Resnick — own several more million acre feet via underground water bank rights.

In both regions, farming choices have veered toward especially "thirsty" crops like cotton, pistachios and almonds that many experts consider unsustainable choices for the region.

Much has been made about the necessity of agribusiness's presence in the California economy, but whether that presence necessitates the irreversible destruction of one of California's greatest resources remain to be seen.

Perhaps the choice is not between more infrastructure and the end of agriculture in California. Perhaps it is time to discuss how the state can regulate farming practices, particularly in arid regions without sufficient groundwater resources, and especially when farming choices endanger the reliability of water delivery for the rest of the state's myriad stakeholders.

California's community leaders and citizens remain undecided as to whether the supposed benefits of this costly infrastructure will ever trickle down to their homes and watersheds. Certainly, the call for a more in-depth discussion of who will carry the cost for this project is an apt one.

Hopefully, similar discussion as to the long-term efficacy of privileging the needs of a few thousand farmers over millions of humans, creatures and a thousand miles of irreplaceable marshland habitat will follow.

Megan Martens is a writer, educator and artist. She has a a bachelor's degree in geography and a master's degree in social justice and equity studies. Most of her research falls broadly into auto-ethnographic explorations of California ecology and history. Her home base is Sacramento, but you can often find her outside, exploring the mysteries of the natural world with her two children. Email her at midgefly@gmail.com.