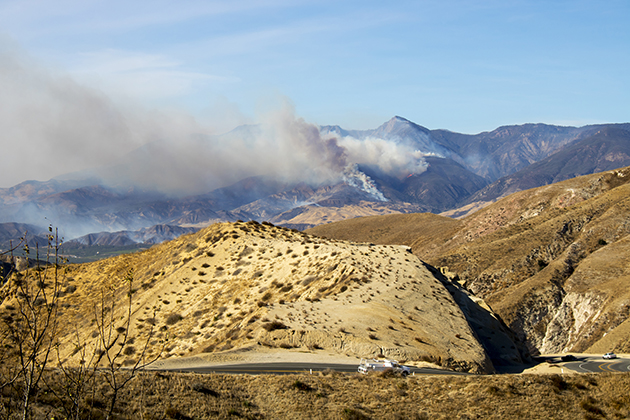 It has been another challenging week in Southern California, as several fires are now contained. However, the historic Thomas Fire, is still burning. Now considered the fourth-largest in California's history, it is already responsible for the destruction of 250,000 acres, 972 structures and two lives.

For the past few days, winds have been less severe, allowing firefighters to gain a handle with 30 percent containment. Thursday's news of a firefighter's death in the line of duty is a stark reminder that the Thomas Fire's severity cannot be underestimated.

In fact, another round of Santa Ana winds are in the upcoming weekend forecast. Believe it or not, the fire is gaining new momentum from powerful sundowner winds, which can push mountain-based fire toward even more homes. The highly unusual sight of 50-foot tall blazes "working their way down a mountain" in the Matilija Wilderness — which lies between Ventura and Santa Barbara counties — has been reported.

The Thomas Fire continues to defy statistics, as it burns increasingly dry brush and anything else in its path.

In addition to the two official deaths, local avocado and lemon crops have been severely damaged, echoing the wine country damage from previous Northern California fire. The New York Times reports that the recent fires have deeply impacted "a $45 billion industry in California that employs more than 400,000 people statewide. The Thomas fire ... struck the biggest avocado- and lemon-producing region in the United States."

Given that the wildfire zone remains closed and in a smoky haze, it is still difficult to estimate the damage to the crops in dollars.

Meanwhile, California still struggles with regulations to prevent wildfires from starting and spreading. In many respects, actions encouraged by wildfire prevention — such as clearing brush near homes and banning flammable wood roof shingles — have proven no match for the high winds involved here. People's hands feel tied, as they helplessly watch high-power fires engulf homes and neighborhoods.

Some of these regulations help prevent small fires, but they prove less effective up against the "tsunami version of a fire" — as Eddie Villavicencio, assistant fire marshal for the city of San Diego, describes the current conditions.

The fire regulations began after the historic Bel-Air blaze of 1961, which destroyed 500 homes in a celebrity-packed neighborhood. Today, Bel-Air is recovering from the now contained Skirball fire, which was supposedly started by homeless people illegally cooking in an encampment.

Only four homes were destroyed in Bel-Air this time around, and this is in some measure due to the use of private firefighting services in more affluent neighborhoods. A recently released Wall Street Journal video shows that for Bel-Air homes costing more than $1 million to rebuild, a firefighting service can come with the insurance plan.

But government firefighters still get priority as private teams are not allowed into evacuation zones for fear they will obstruct other fighters' progress.

Returning to fire regulation codes, some have noted that the best way to avoid fire damage, if you can't afford your own firefighting service, is to "create a fire-resistant zone around your home." In San Diego, it is the law to clear brush 100 feet from your home. If you don't keep this up, the city will do it for you and send the bill to the homeowner.

For some, San Diego's recently contained Lilac Fire provided a positive example of regulations' role in preventing large-scale damages. Others think these regulations do little if structural flammability issues aren't addressed. They advocate measures such as sprinkler systems and fire-resistant roofs: an even more proactive stance than brush-clearing.

Montecito, a still-threatened community in Santa Barbara county, is hoping that controlled backfires will clear brush that could spread the Thomas Fire.

With this weekend's high winds forecast, any effort helps in the containment goal. 8,000 firefighters and 1,000 engines remain in full service this weekend. Thursday's loss of a firefighter serves as a grim reminder to all of both the fire's danger and the situation's urgency.