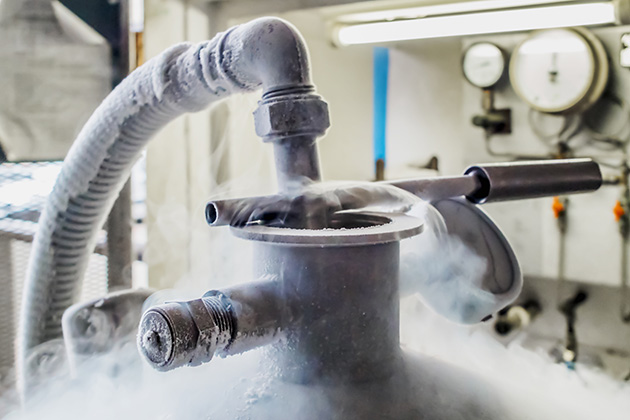 Advances in cryogenics could pave the way for storing organs for transplant — a move that could increase the number of transplant organs available and significantly lessen waiting lists.

As it stands now, organs must be used within a few hours of being harvested from donors. That means roughly 60 percent of donated organs aren't used since suitable recipients sometimes can't be found or are located too far away from the donor.

Estimates suggest that if only half of the donated organs that are discards were used, transplant waiting lists would be eliminated within a couple of years.

While cryopreservation has been used for years for red blood cells and reproductive cells, it hasn't been successfully used for samples larger than one milliliter in volume. Organs could be frozen using a process called vitrification that infuses the tissues with an antifreeze-like chemical. When cooled to lower than minus-90 degrees Celsius, the solution prevents ice crystals from forming.

The biggest challenge has been thawing the frozen organ. Without rapid and uniform thawing, sudden expansion causes cracks and damage to the cellular structure.

But, in a new study published in the journal Science Translational Medicine, the approach to thawing was changed significantly. The new technique was dubbed "nano-warming" by the research team that developed it the University of Minnesota.

In the study, pig heart valves were infused with a cryoprotectant solution mixed with iron oxide nanoparticles, which were covered in silicon to make them biologically inert. The samples were cooled to minus-160ºC using liquid nitrogen.

To thaw the sample, it was placed inside an electromagnetic coil that generated an alternating magnetic field. As the field alternates, the particles inside the sample move rapidly and uniformly. Warming rates of 100 to 200 C per minute were achieved — 10 to 100 times faster than previous methods.

When the samples were tested, the tissues did not show any signs of harm when compared to control samples that were thawed slowly over ice. The team was also able to wash away the iron oxide nanoparticles from the sample but said more testing would be required before the method could be used in patients.

Research is now being conducted on rabbit kidneys and human allografts, which are combinations of skin, muscle and blood vessels donated from patients. Samples up to 80 mL are being studied.

"That will be our first trial with human tissues," said Kelvin Brockbank, chief executive officer of Tissue Testing Technologies in Charleston, South Carolina, a professor at Clemson University and a co-author of the study. "If that is successful, we would then progressively move to structures such as the human face for banking and for hands for banking as well as digits."

The timeline for clinical use is murky, Brockbank said, given regulatory approval and further technical refinements.

"We are not in any way declaring victory here," said John Bischof, senior author of the study and a mechanical engineering professor at the University of Minnesota.

"We have promising results, but we have not yet done it," he said, warning of "many hurdles" still ahead.