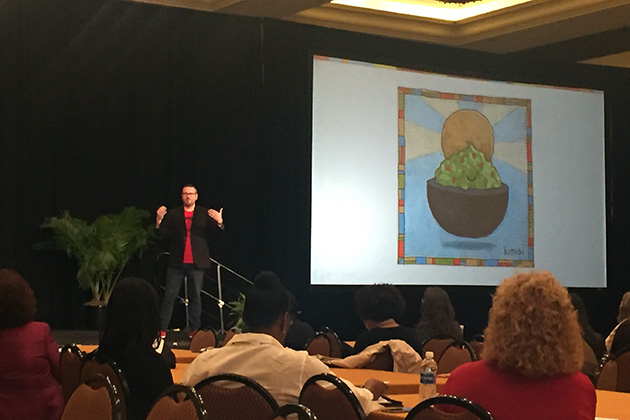 GRAPEVINE, Texas — For many of us, stress and a rigid routine are a part of our daily rhythm, and there's no escape. For author and speaker Jason Kotecki, a whole other way to live exists — and he's on a mission to remind people of the alternatives.

Kotecki, who has written several books including "Penguins Can't Fly +39 Other Rules That Don't Exist," addressed a packed room last week at the Gaylord Texan for the Commission for Case Manager Certification's New World Symposium.

We are fighting an enemy we have never even heard of before, Kotecki said, and it goes by the name of adultitis. According to adultitis.org, it is a "common condition occurring in people between the ages of 21-121, marked by chronic dullness, mild depression, moderate to extremely high stress levels, a general fear of change, and, in some extreme cases, the inability to smile."

Kotecki offered insight on how to fight this hidden foe that finds its way into our busy schedule. He started off by helping the audience diagnose themselves to see if they have the condition. Indicators included people whose cellphone has become a body part, multitasking and obsessing over a to-do list.

"How can we look at things in a different ways?" Kotecki asked. "We get so caught up in best practices we don’t consider there might be a better one."

Kotecki advised becoming more open to looking for new perspectives. As an example, he showed the attendees a picture of a field of dandelions. While adults may see weeds, kids see wishes; they see flowers.

Kotecki also shared the story of an emergency meeting his parents called. Wondering what could be so urgent, he anxiously waited for his parents to show up, only to see his mom arrive in a bee keeper costume, alongside his dad who was dressed as a bee.

From there, his dad shared that during his last doctor's visited, he was diagnosed with prostate cancer. However, his dad also explained that the prognosis looked good and that he had treatment lined up.

As the weight of the news started to become replaced with hope, Kotecki had an epiphany: That was probably the first time in history anyone revealed they had cancer while wearing a bee costume. He found out his father decided to deliver the announcement that way to "help take the sting out of the news."

From there, an idea was birthed, and a new mission in life was created.

Inspired by his father, Kotecki created artwork with a bee and the phrase "bee optimistic." His dad liked the art so much he had them turned into buttons and now hands them out to people wherever he goes.

Kotecki explained the definition of tinkering involves repairing or adjusting something in an "unskilled" or "experimental" manner. That's how you become innovative — you try lots of things and see what works.

One of the stories he presented as an example of how tinkering can lead to better results was of his daughter Lucy. While out on a walk around a lake, Lucy wore a princess dress. When he turned his attention toward his son, Lucy decide to go into the lake. The next thing Kotecki knew, his daughter was standing in the lake with water up to her armpits in her princess dress.

Something in his brain began searching for a rule that said she shouldn't be in the lake with her princess dress, but he realized there is no such rule. When he saw the look on his daughter's face as she stood beaming with joy in the water, he realized she really knew how to live well and without the same limits many adults impose on themselves.

"How many times do opportunities come and we say 'not today' because we are afraid to get our princess dress wet?" asked Kotecki. This princess dress could represent many barriers that hold us back, such as our reputation, how we dress and the letters after our name.

"We think people like us aren't allowed to do certain things," he said as he advised the audience to not allow fear to keep them from getting their princess dress wet.

This last words of advice came from a realization Kotecki had about conversations that occur at the end of our lives.

"We spend a lot of time thinking and worrying about big stuff, such as changes in our industry, the economy, terrorism, but I thought of something very interesting," he said. "When you get to the end of your life, and your friends and family are gathered around, those big things never seem to come up, but you know what does, the little things, the adventures you've shared."

Kotecki stressed he is not saying to ignore big issues and to give up on attempts to make the world a better replace. Instead, he is suggesting that we incorporate "portfolio-making" ideas into our lives.

Ideas included adding something childlike in an area where you get stressed out a lot, such as your cubicle, while another involved putting out kitchen utensils such as spatulas, a potato masher, etc., and placing them out on the dinner table for people to eat with. Another suggestion the audience seemed to especially enjoy was taping a light cup such as one from a fast food place to the top of your car and then going for a drive.

While the "portfolio-making" ideas may sound ridiculous to many, for Kotecki, they are invaluable as they become part of the collection of stories that circle back to us when we look back at our lives.

Esther Cho is a content editor at MultiBriefs, where she edits e-newsletters for a wide variety of industry associations. Prior to her current role, she worked as an online editor for a national mortgage publication.