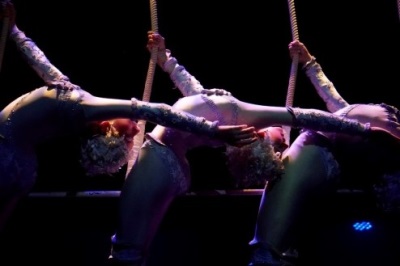 Dramatic music and theatrical lighting set the mood as three silvery, besparkled, nymph-like creatures move their limbs, twist, twirl and drop in perfectly timed synchronicity suspended in the air above you. You could easily be at Cirque de Soleil in Las Vegas or Cancun.

Yet when the performers glide off the trapeze and step before the audience to take a bow, you notice their proud, shining young faces — they’re children! Actually, you have just witnessed a number in the annual fundraising show for Circo de los Niños in the small Mexican village of San Pancho.

"Along with adrenaline, the children stand in the spotlight feeling the rush of positive affirmation from the crowd for what they’ve accomplished as a performer," says program coordinator Glades Perreras. "It’s a magical moment where they really shine and feel a deep sense of pride for all the hard work they’ve done."

The boost in self-esteem gained from performing is only one of numerous benefits that young people get from participating in circus. Circus training programs for children and adolescents are growing in popularity — from circus schools and after-school park district classes to summer camps and social circus programs for at-risk youth.

A recent study commissioned by the American Youth Circus Organization (AYCO) attests to the power of circus. The nine-month study conducted at 11 social circus program sites showed a significant positive impact on the development of social and emotional skills for youth who face social issues such as trauma, violence in communities, and social isolation.

Just last year the Canadian government recognized the cultural value of circus with a $1 million-dollar grant to promote recreational and preparatory circus arts for young people in Quebec.

Anyone watching a performance can’t miss the obvious physical ability that these kids exhibit, a quality not to be undervalued in face of growing concerns about fitness levels dropping among youth and childhood obesity. Increased agility, balance, coordination, flexibility, strength, grace and skill figure are common benefits these young people reap from training.

Boasting an amazing range of activities, circus runs the gamut when it comes to fitness skill sets. So as children rotate through the different specialties in a typical afternoon of circus class, they are exercising their bodies in a very complete way.

Since circus is fun, kids feel engaged and keep coming back day after day and year after year. In time they achieve a very high level of overall fitness.

13-year-old Summer, who spends more than half the year in Mexico, notes her fitness level often exceeds that of her counterparts in her PE class back in the States. She attributes her strength to the six years she’s participated in Circo de los Niños — which her mother notes has served as a sport for her two daughters. A safe venue for all kids

The artistic aspect of circus along with its unusual activities help children develop skills that may not be developed in athletics. Along with its noncompetitive atmosphere, this makes circus attractive to all kinds of kids — including ones who wouldn’t be attracted to traditional sports.

"There’s something for everyone." says 14-year-old Ayla, who has been in the program for two years.

Summer’s sister Charlotte says that trying all the different circus specialties has introduced her to new things and helped her discover what she likes.

"Everything we do is to create the space where they can take risks — where they can go wild, push themselves outside their comfort zone," says Perreras. "They’re constantly breaking a boundaries at all levels, pushing their physical limits which reflects emotionally and mentally."

Safety is the crux of the Circo de los Niños program, adds Perreras. "Here kids know they’re safe on all levels. Safety is tangible for the children. They understand that it wouldn’t be safe for themselves and the others if they were allowed to do whatever they wanted and feel protected by agreements and rules that we have."

Safety on the emotional level means that they are personally encouraged in an atmosphere of respect.

Intrinsic to circus is the development of interpersonal skills so critical in today’s global community, such as cooperation, trust and teamwork.

"Performers in other arts may have the opportunity to work solo, but circus arts requires cooperation," explains Perreras. "Classes are set up so that there are group dynamics to support the building of trust and mutual respect between members."

In all parts of the process team members are supporting each other, helping each other. It becomes so engrained in them that even when they are under pressure, they remember to take care of each other.

During the family show, which serves as a second dress rehearsal, Sofia, one of the youngest members in the show got her foot caught on the hoop she was diving through and pulled it out of the hands of the older child holding it. Her reaction spoke to the depth of her commitment to the group — running back with the hoop she held it up for the next member to jump through and the endearing sight made the crowd go wild. Emotionally, children develop an "I can" attitude. They see that they can be frustrated but that they can push through it, notes Perreras. They really grow emotionally as they handle discomfort and work through fears to do something that doesn’t come easy.

Ayla speaks of how her companions along with her teacher encouraged her when she started to do triple trapeze and felt afraid of falling. With their support she kept practicing until her fear subsided and she was successful in the specialty.

Belonging to the larger community

Teambuilding within circus ripples out into the community.

Originally piloted as week-long workshop with idea that it would be a good way to bring people together in the community, Circo de los Niños now reaches over 160 kids, hires professional teachers and runs for nine months out of the year. Fundraising efforts make it affordable for local families at around $150 for the entire year.

Members who’ve left for university attest to the deep impact their participation in circus has had on them. Often they return to give workshops or help out with the show and receive a warm welcome. Similarly, many volunteers return year after year — some travelling from Canada and Europe.

The vast majority of participants consider circus the core of their social circle. Here, they connect and interact with youth of different ages, from different schools, national backgrounds and social stratus.

Without being fully aware of it, this generation of circus kids is growing up healthy, erasing borders and building a united community.

"It’s so much more than putting on a good show!" says Perreras.