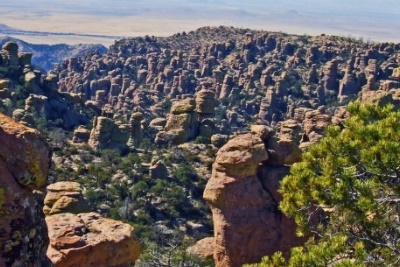 It was a beautiful morning, so Diane suggested we take a day trip to the Chiricahua National Forest about 90 miles to our east.

The forest includes a National Monument, with the greater part a wilderness untouched since the early 1400s, when the Chiricahua Apaches made it their home.

We left our coach mid-morning, traveling down to Benson on the back road along the Dragoon Mountains where we connected with Interstate 10 east to Willcox. The interstate rises several thousand feet above the San Pedro Valley to cross the Dragoon at Texas Canyon, a beautiful and colorful area of very large boulders at the summit.

The many rock formations always remind me of my youth watching black and white western movies. Even now the “kid” in me yearns to stop and climb some of the big boulders — just for the hell of it.

They call this area Texas Canyon because in the late 1800s, a small group of Texans settled just below the peaks and created a cattle ranch. People in the valley near Benson would refer to the ranchers as “the folks up in Texas Canyon.”

Our first stop — that is, after we cross the Willcox Playa — was Apple Annie’s. Playa in Spanish means “beach.”

The Willcox Playa is a play on words. the landscape is 10 miles of soft dirt and wind-beaten sand. When the wind gushes to 60 mph, it is difficult to see the road on foot or horseback.

It can and is a very dangerous piece of land. Willcox is a little western town that earns a living being next to the interstate. There are a couple places of interest and enjoyment, and Apple Annie’s is one.

The building once belonged to Stroud’s, an apple grower north of Willcox. One would die for their apple pie, and to this day, we have never nor since eaten apple pie like the ones made fresh at Stroud’s.

We wanted to try Apple Annie’s stopping for coffee and pie. The special of the day was crumb apple.

Immediately, we noticed the slice was smaller than Stroud’s, and not as high with apples. The waitress warmed the pie before serving it, and it was very tasty with a strong apple flavor and not an overwhelming amount of sugary sauce. Overall, I would stop again; I would give it a three and half out of five. Stroud’s was always a five out of five.

Leaving Willcox, we drove south on Arizona 186, a narrow country road that quickly puts you into cattle country and miles and miles of golden grassland. The road twists and turns with many sharp inclines; one feels he is on a roller coaster ride at times.

Suddenly, the road straightens out and is as flat as a pancake, and you can see for miles around you. This area is referred to as the Sulfur Springs Valley. The valley is enormous, running north to the Pinaleno Mountains and south to Agua Prieta in Mexico. It was from this valley that the great war chief Cochise led his people into a defensive stronghold among the rocky cliffs. It was throughout this valley that Geronimo fought so valiantly and was determined to keep and hold the land from the intruding white man and their cattle.

This beautiful land was all Apache land. They never owned it, just lived upon it without causing damage. One of the four main tribes, the Chokonen, lived in and around the National Monument.

The Apaches were basically nomadic people, something like me. For the most part, they hunted wildlife and gathered edible plants and roots.

The men were superb warriors, feared and respected by their enemies. One of my interests in travel is to learn a little more on each trip about the native tribes that lived on the land before the white settler arrived.

It is now that I understand why they fought so valiantly and fearlessly. They were not savage; they were noble, gallant people living a simple life defending their homeland.

The entrance to the Chiricahua National Monument begins on the valley floor, a land of evergreens and waist-high grass. It is not unusual to see white-tailed deer, javelina and coatimundi among the Parry Agave and Manzanita bushes. While on our drive to Massai Point we stumbled upon many Mexican jays. They were just flying from one juniper to the next. They are a beautiful bird with a pleasant sound.

The meadowlands are dotted with prickly pear cacti and mesquite. Mesquite will soon be giving off a perfume aroma that fills the air with a delightful flowery scent.

Rising from the Visitor Center, we begin to see the many rock pinnacles looming, towering over the road, like guardians of the mountain. The Apaches called these pinnacles and columns “standing up rocks.”

We find it awesome the way one large rock is balanced against another. The mountainside is teeming with spires, balanced rocks and “hoodoos” of all shapes. The longer you linger, the more alive the formations seem.

This is our third visit. The first was late in the spring when the snowy peaks were shedding their winter coats and the streams were flowing creating a wonderland of beauty and sound. We just love to stop and sit beside a flowing stream. The sound of the water is so comforting and relaxing to the spirit. Today, the streams are bone-dry. There is just a bed of stones and sand, yet beauty to be found.

The road to Massai Point climbs to 6,870 feet; it is like being on a mountain island in the sky. The road is safe, but one must drive carefully, it is a long way down on one side with few guardrails to protect you.

The view from Massai Point and Sugarloaf are incredible on a clear day. On our day, there was a slight haze caused by terrible 60 mph winds the day before, with dust still lingering in the air. We were told the road was closed due to fallen trees and small rocks upon the pavement.

Our return trip took us south on AZ 181 and 191 until we reached the cross roads to Gleeson. We were pleasantly surprised the road; some 27 miles had been completely paved, allowing for smooth travel into Tombstone.