Chimayo: The village with healing powers 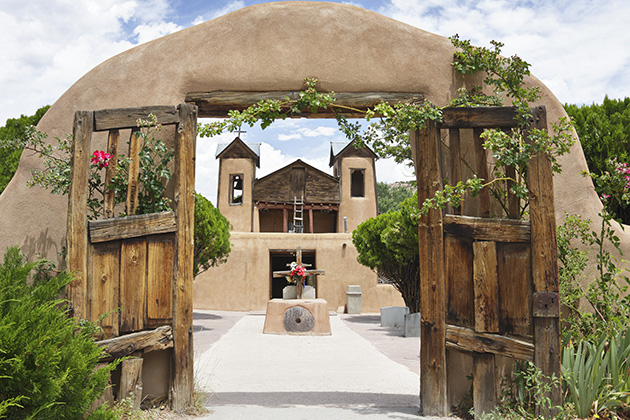 Nestled away among the badlands of New Mexico, 28 miles north of Santa Fe, sits the little village of Chimayo. This community of artists, chile farmers and deeply religious people live in an oasis of fertile soil surrounded by the dry high desert of Northern New Mexico.

Chimayo ("tsi-mayoh") is named after one of the four hills in that area that were sacred to the Tewa Pueblo Indians, and as I learned this Good Friday, it is one of the most important Catholic pilgrimages in the United States.

Called the Lourdes of America, every Easter thousands of people walk — some as far as 100 miles — bike or drive to visit El Santuario de Chimayo and seek relief from the healing powers of the dirt. The pilgrimage started after World War II when survivors of the Bataan Death March decided to walk to the sanctuary. In 1970, El Santuario de Chimayo was added to the National Historic Landmark registry.

The legends of the sacred, sandy, reddish-brown dirt and its source of energy are many, and they date back to the time of the Tewa Pueblo Indians. Long before the Spaniards and their religion showed up, the Tewa Indians told stories of healing spirits in the hot springs in the Chimayo area. Many people believe the earth retained the healing energy when the springs dried up.

However, Chimayo's fate in the religious world was catapulted in 1810 after the story that a local friar spied a light emanating from one of the hills nearby. Upon investigating, he discovered a small crucifix. The friar carried the crucifix to a church in Santa Cruz, but mysteriously overnight, the crucifix returned to the hill. After this happening several times, the locals built a small little chapel around the crucifix, and El Santuario de Chimayo became a mecca of miraculous healing.

Many new-age followers believe that a geospiral exists with the center at El Pocito, "the little well" where the holy dirt is taken from, and one outside behind the little church. A geospiral is earth energy that radiates in a circular pattern.

When many geospirals exist together, it creates a vortex — like the ones in Sedona, Arizona, or Stonehenge. Two geospirals exist at Chimayo, so it is considered a "mini-vortex." Robert Egby discusses Chimayo's geospirals in his book "Holy Dirt, Scared Earth; A Dowser’s Journey in New Mexico."

Around 300,000 people travel to Chimayo every year, with Easter week being the major peak. This year the number of Easter weekend visitors was thought to be around 42,000.

Chimayo is also known for its weavings and its retablo art. And red chile from Chimayo is unique to the region — deep red in color with a sweet, earthy taste that accompanies the passionate heat of the chile. Crops grown every year start from seeds that date back 300 years.

Wherever the power of the healing dirt is sourced from — spirits, deity or earth energy — you can feel positive effects in the environment of the sanctuary.

If you are one of the devoted who trek the pilgrimage miles along the dry and hot roads through the badlands to arrive at this fertile oasis, or you hop in your car in search of unique art and the regions own culinary specials, Chimayo will create a wonderful day trip from Taos or Santa Fe.