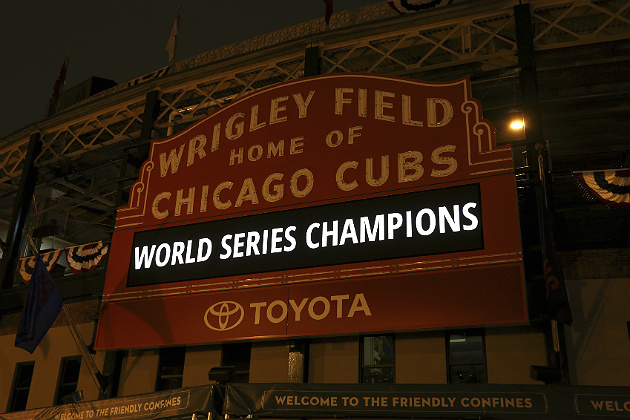 The marquee at Wrigley Field flashes "World Series Champions" after the Cubs' win in Game 7 over the Cleveland Indians.

Now that the Chicago Cubs have ended their 108-year World Series drought, we can take lessons from the team formerly known as America's lovable losers.

Perseverance is not the only trait individuals and companies can draw from the Cubs' success. Veteran catcher David Ross, known among his teammates as "Grandpa Rossy," was widely credited with providing mentorship to the young club, something that holds value for organizations beyond sports.

Is there someone at your company toward whom younger workers gravitate? Does your association have individuals who always seem to be rolling up their sleeves and tackling tasks large and small? Does your school feature teachers who seem to know all the best practices?

Those are the people who provide added benefits to your organization. Sometimes they're overlooked or taken for granted, but if you're aware, you can harvest their capital.

In education, keeping those valuable resources in the field seems to be a challenge. The teaching workforce sees an 8 percent attrition rate annually, according to the Learning Policy Institute.

Part of that is due to a lack of preparation of teachers entering the field, the institute's president, Linda Darling-Hammond, told NPR. Mentoring from more experienced educators is one way to stem those departures.

Mentoring also helps retain employees in other fields, according to a report by Harvard Business Review. That report cites three types of mentoring — buddy/peer mentoring, career mentoring and life mentoring — as crucial in employee retention and illustrating care about employees' professional development.

That's similar to the role Ross played in the dugout, especially in a scene captured by cameras during Game 7 of the World Series. When 27-year-old Anthony Rizzo approached the 39-year-old Ross for reassurance during the tense contest, Ross displays a calm, straight-forward demeanor amid the emotional game.

Anthony Rizzo speaks for all of us watching this game. pic.twitter.com/siYEYMvlVk

The benefit of that type of wisdom is often overlooked in the work world.

"What the tech industry often forgets is that with age comes wisdom," Vivek Wadhwa, a Distinguished Fellow in the College of Engineering at Carnegie Mellon University, wrote on LinkedIn. "Older workers are usually better at following direction, mentoring and leading."

The 2015 movie "The Intern" taps into that , with Robert DeNiro portraying a retiree who earns a senior internship with an online clothing site run by hard-charging Anne Hathaway, who sees no worth in having an intern. But DeNiro's Ben Whittaker — with work skills and knowledge that transcend generations — eventually enlightens Hathaway's Jules Ostin.

Mentorship programs provide benefits for associations as well. New members sometimes can be hesitant to move forward on unfamiliar ground. Having someone who's been there to glean information from is reassuring.

It also provides a springboard to more involvement, according to Meaghan Hughes of the Ann Arbor Area Convention and Visitors Bureau. After joining the National Association of Sports Commissions, she found the organization's mentorship committee a perfect fit.

Another aspect highlighted by older workers is soft skills such as time management and the ability to handle difficult interactions, according to HRDive. Those attributes are sought by millennials, according to the website, and can be fostered with attentive team-building within companies.

The mentorship door swings both ways for Ross and millennial teammates Rizzo and Kris Bryant. The young pair, after learning last spring that this baseball season would be Ross' last, created an Instagram account to keep up with the veteran catcher's journey toward retirement.

Ross acknowledged the social media account was a game-changer in the public perception of him across Chicagoland, according to Comcast SportsNet Chicago.

"Since that Grandpa Rossy Instagram thing took place, it's been a lot crazier for me personally, just out and about in public," he told the website. "But you know, I really appreciate it. It's a lot of love and I promise you, I don't deserve even half of it."