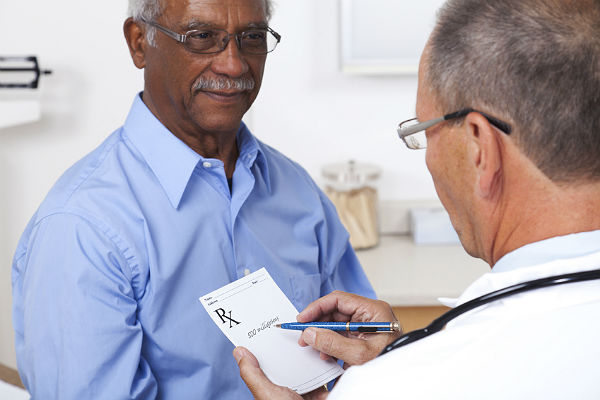 The overprescription of antibiotics in the U.S. is not a new phenomenon, and experts have warned healthcare providers about the dangerous implications for years. Despite these warnings, overprescribing persists, so the Centers for Disease Control and Prevention (CDC) and the American College of Physicians have just issued some new advice specifically aimed at curbing antibiotic use for acute respiratory tract infections.

During the current cold and flu season, doctors are seeing an influx of patients presenting with symptoms like green mucus and a long-lasting cough who believe they are in need of antibiotics. Doctors prescribe these patients antibiotics 75 percent of the time for respiratory infections.

But Dr. Janette Nesheiwat of CityMD tells CBS News this is unwarranted because most respiratory infections are caused by viruses. In fact, research has shown that almost half of the antibiotics prescribed are unnecessary.

The new guidelines included in the Annals of Internal Medicine encourage physicians to recommend over-the-counter remedies as a first line of defense, and insist antibiotics should only be issued in severe cases. The guidelines focus on four types of respiratory infections:

The authors state the only time antibiotics should be prescribed in these instances is for cases of strep proven positive by a strep test, a pneumonia diagnosis or a sinus infection with fever that seems to be worsening over time.

Antibiotics should never be prescribed for a cold, but part of the problem facing physicians is that it is often difficult to distinguish a cold from a sinus infection unless a culture of the microbes is taken, which is a timely and costly process that usually takes one to three days. That's why Dr. Ephraim Tsalik and his colleagues from Duke University Department of Medicine are developing a new blood test that takes only one hour to distinguish between bacterial and viral infections.

The new test only requires a few drops of blood from the infected patient in order for physicians to examine the patient's genetic reaction. Because our immune systems react to infections and viruses differently, physicians will be able to determine whether the microbe is a bacterial or viral infection, depending on which genes are activated.

In trials, the test showed an 87 percent accuracy rate in distinguishing between bacterial and viral infections. The test is still in development, but Tsalik believes it is a big improvement over the current tests and a step in the right direction in curbing the overuse of antibiotics.

The overprescription of antibiotics has created a second unintended challenge facing us today — the emergence of antibiotic-resistant superbugs. These superbugs have become a problem for hospitals and other healthcare settings because they are often difficult to detect, yet are dangerous and potentially fatal.

One type of superbug know as carbapenem-resistant Enterobacteriaceae (CRE) was responsible for an outbreak that infected 180 patients at UCLA's Ronald Reagan Medical Center in Los Angeles last February. CRE poses a challenge to healthcare professionals because it has developed an enzyme that breaks down antibiotics and renders them useless. Superbugs like CRE are responsible for 2 million illnesses and 23,000 deaths each year in the U.S.

Antibiotics themselves have put a strain on the healthcare system when used unnecessarily. Research suggests antibiotics are to blame for 1 out of 5 emergency room visits. Patients are often using antibiotics incorrectly or are experiencing adverse side effects from the antibiotics, such as the buildup of Clostridium difficile after completing a strong round of antibiotics.

In order to stop antibiotic-resistant bacteria from flourishing, doctors must make it their responsibility to educate patients on more appropriate options to treat their ailments. Patients often see the doctor expecting to receive antibiotics after they have given up on over-the-counter (OTC) drugs, but American College of Physicians President Dr. Wayne Riley has found that many of his patients are not using the OTC drugs correctly and need guidance on their options. 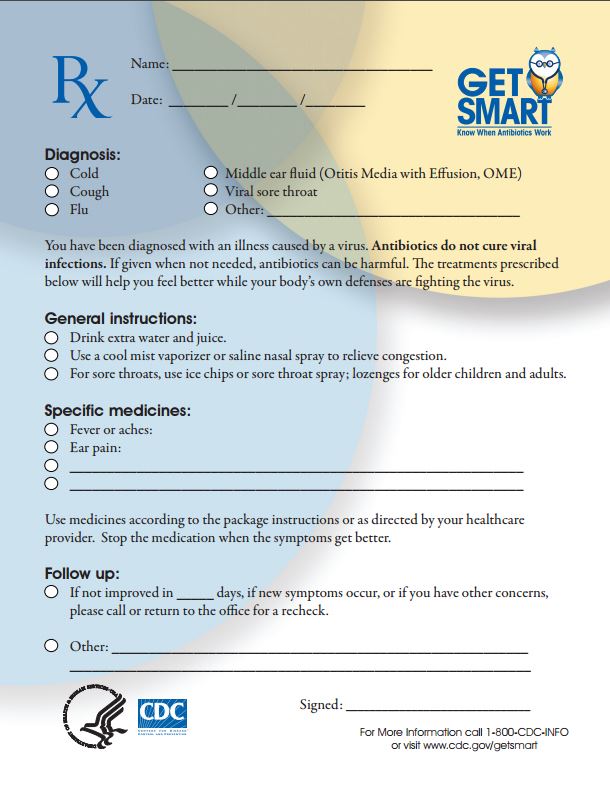 In an effort to help physicians and pharmacists educate patients more thoroughly on the correct usage of OTC drugs, the CDC has created a "symptom prescription pad" (see above) as part of their Get Smart antibiotic education campaign. The pad lists some simple discharge suggestions for patients while leaving space for the physician to make proper OTC drug recommendations and explain their correct usage.

A full copy of the prescription pad can be found on the CDC's website, along with additional antibiotic education resources for both patients and physicians.