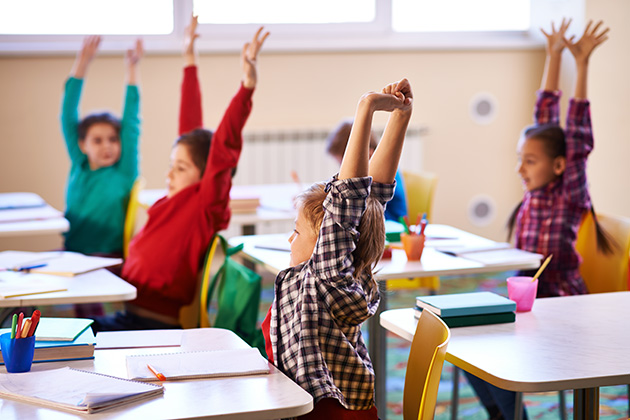 Too busy to learn a new language? Try taking your language lessons to the gym!

No, this isn’t the latest "multitask for success" tip — working out while you study has actually been proven to improve memorization and retention of new vocabulary.

Recent research of Chinese university students with a basic knowledge of English demonstrates physical activity's positive impact on language learning. The study published in PLOS One showed students who rode exercise bikes while being introduced to a set of new English words improved performance at both the word and sentence level.

Researchers had one group of students ride stationary bicycles prior to and while watching a projected presentation of pictures along with their written and spoken names, all unfamiliar to the students. The control group viewed the same presentation while seated in chairs.

"These improvements extend beyond simply aiding in memorization," explains study co-author Simone Sulpizio, professor of psychology and linguistics at the University of Vita-Salute San Raffaele University, Milano, Italy, in a New York Times article. "The exercise also deepened language learners' grasp of how to use their newly acquired words."

Study outcomes support previous research showing that exercise positively affects cognition including one study where three test groups were taught new vocabulary — one immediately after high-intensity sprints, another following 40 minutes of moderate aerobic exercise and the last following 20 minutes of inactivity. Results for the high-intensity group showed a 20 percent faster rate of vocabulary learning along with increased levels of BDNF, a brain protein associated with improved cognitive function than the other two groups.

The most recent study quieted concerns raised that the positive effect of physical exercise is limited to the initial stages of L2 learning when fluency is limited or nonexistent as was the case of the participants in former studies.

All these studies deal with adults and conclude that the exercise helps with brain elasticity, slowing down age-related cognitive decline. According to the authors of the study, younger people have more aptitude in retaining a language than adults, suggesting that as students get older they benefit more from studying while exercising.

On the other hand, anyone who has worked with young L2 learners can attest to the fact that not all students grasp target vocabulary easily. For example, I have seen students with several years of daily instruction under their belts who still struggle with something as basic as the days of the week.

Using movement with children as they develop language skills is valid even if their brains naturally have more elasticity. Activity breaks, which are becoming more common in general classrooms due to proven cognitive benefits, offer one alternative.

Yet incorporating simultaneous movement and study poses more challenges. Obtaining funding for 30-odd exercise bikes to outfit your ESL classroom isn't that likely — so how would getting students to exercise while learning look?

Here are some activities I've used with small groups of around 10 children long before I knew their potential impact. For a larger class, one option would be to do them when you can divide your group or during a centers activity.

Vocab hopscotch: Use flashcards with an image or creating large laminated cards with target vocabulary and corresponding image printed on one side and just the image on the other side. To teach vocab, place cards with words on selected squares on a hopscotch game.

As they play the game, students read the words (for the first round you may say the words with students to clarify pronunciation). To review, which can be another day, use the image-only side to play the game.

Vocab freeze tag: I've used this in small groups of young students to help with pronunciation of challenging words. One word is used by the person who is "it" to freeze other players. The word that is giving the group the most trouble is used by the other players to unfreeze their teammates.

In the context of the game, they have no qualms in repeating this target word over and over. Once you see that most are consistently pronouncing the word correctly, you can change the words.

Word list freeze tag: With secondary students, I've used freeze tag in situations where they are learning long lists of words in a given category — for example, during a project in which they were learning all the countries in Asia.

Here, to unfreeze their classmates they had to use a country name that hadn't been used so far in the game with the correct English pronunciation. Each time we changed the person who was "it," we cleared the slate so they got repetition in the activity.

The idea is to combine a simple vocabulary lesson that's visual, auditory or both with aerobic activity that raises the heart rate, such as dancing, running or jumping. If getting this to happen in the classroom is too complicated, try sending vocabulary words for homework, instructing students to study them while exercising.

For an interesting project to try with older students, share a summary of these studies with them and challenge them to come up with their own tests to prove or disprove the results. Along with motivating them to do some independent thinking, they will probably pick up some new vocabulary without even realizing it.

If you try this with your class, we would love to hear about your findings.