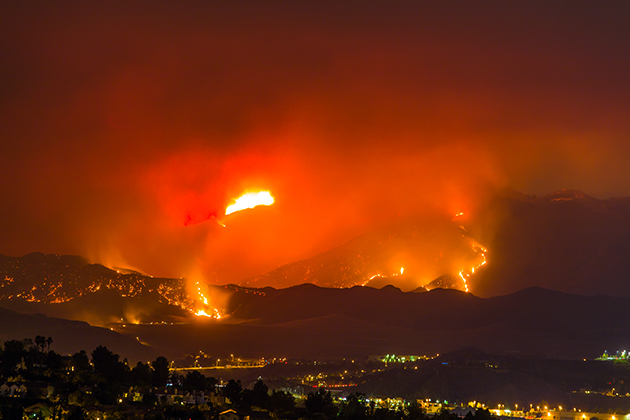 As more than a dozen wildfires rage on throughout northern California, 170,000 acres have already been burned up.

Earthquakes, hurricanes, fires — what's next? As we have all been witnessing, recent extreme weather events have had devastating impacts on North America. These conditions are further accompanied by harsh economic burdens.

After Hurricanes Harvey and Irma, it should come as no surprise that September marked the first month in seven years that the U.S. lost jobs — mainly in the hospitality sector. Now, raging California wildfires further threaten an already unstable tourism industry, and we won't fully understand the full economic impact until the fires are contained.

As more than a dozen wildfires rage on, 170,000 acres have already been burned up, 23 people are dead, and hundreds are reported missing in northern California. Nearly 20,000 residents have been evacuated, and 3,500 structures have been engulfed in flames.

Hospitals have been evacuated at the same time that National Nurses United cites a general shortage of hospital burn units to treat fire victims. In fact, by Monday, Oct. 9, 80 patients had already been evacuated from Sutter Santa Rosa and 130 patients from Kaiser Santa Rosa. Given the inability to provide potential adequate health services to a growing number of fire victims, we can only imagine the necessary conditions required to rejuvenate tourism in the affected areas.

Napa and Sonoma counties are home to 1,000 wineries covering 100,000 acres that produce 85 percent of U.S. wines. The area's wineries, hotels, inns, activities and restaurants create the famous ambience that now stands in a precarious state — to say the least. The industry generates $15.2 billion in taxes annually. It is estimated that fires may "disrupt tens of thousands of jobs and destroy valuable stores of grapes and wine in bins, barrels and bottles," according to the New York Times.

The historic White Rock vineyards, established in 1870, is on this list of destroyed vineyards. No doubt the state's $58 billion wine industry is threatened; we are just waiting to see more accurate numbers. The Napa Valley Vintners Trade association reports nine wineries have been damaged — four beyond repair.


One silver lining here is that the industry reports that almost all of the grapes have been harvested this season, but there is still a looming question about the impact smoke damage can have on wine production. It is not yet time to estimate overall costs from this round of wildfires.

The annual U.S. cost of weather events is $240 billion, about 1 percent of U.S. gross domestic product. But recent hurricanes hitting Texas, Louisiana, Florida and Puerto Rico, plus Western state wildfires — not including the most recent — have already cost an estimated $300 billion.

Keep in mind, also, that President Donald Trump's travel ban helped cause a tourism decline of 4.2 percent in 2017's first quarter, compared to 2016. Intermingle this with persisting weather events, and we begin to see a changing tourism industry.

It may seem tasteless to worry about people canceling vacations because the hotel burned down, but when we consider tourism overall, we are looking at local jobs and economic growth for many destinations. There is great concern as we watch tourist destinations like northern California get added to the list alongside recently hit Florida, Texas and Puerto Rico.

For obvious reasons, including a mass power outage, Puerto Rico travel bookings are down about 20 percent since the hurricanes began. Add to this the island's damaged pharmaceutical industry, which has caused job loss and plant relocation.

Thankfully, Puerto Rico's and Houston's recovery efforts are generating jobs that require expansive use of hotels: 13,000 federal recovery workers currently fill operative Puerto Rico hotels. This is the same in Houston where hotels went from being the worst performers through July 2017 to national leaders in occupancy and revenue growth since Harvey. But remember, while open hotels might be bustling, it is an uphill battle for general economic recovery.

In the coastal town of Port Aransas, Texas, with a local population of 4,054, Harvey destroyed 80 percent of homes and businesses. Visitors spent $221 million there last year.

112.4 million people visited Florida last year. Projections for this year and the near future are more disconcerting. Florida relies on its $40 billion annual tourism industry to generate 13 percent of its state revenue, and since it relies heavily on sales tax revenue (as does Texas), this will surely be an ongoing challenge to replace absent sales tax revenue in this hurricane season aftermath.

California's recent fires pour salt in the wounds of the already-struggling U.S. tourism industry and the overall economy. As consumers, we may be able to forego this season's bountiful California Cabernet selection, but this kind of fire disaster stands as a powerful example of today's unpredictable natural and economic landscapes.