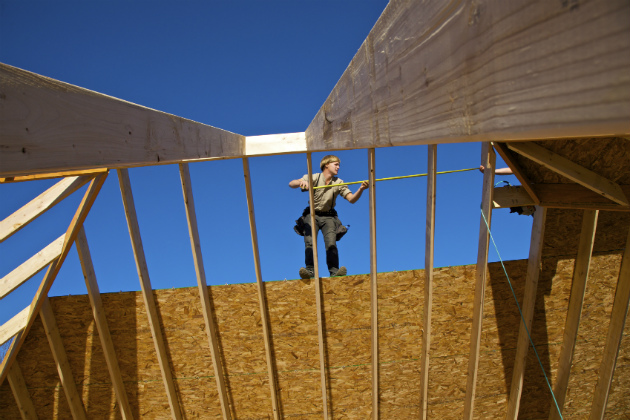 Hopes that momentum from last fall's burst of building activity would carry forward into 2016 have faded following a lackluster first quarter. Figures from March reveal an industry holding steady in the face of economic uncertainty and weak consumer confidence, neither advancing nor receding substantially.

Some sectors fared better than others, but in general construction activity in March remained tepid. New construction starts receded 1 percent following a spike in February, according to Dodge Data and Analytics. The value of commercial and residential activity both increased; however, results were mixed.

Overall, year-over-year growth was less than 1 percent for the industry. Dodge also announced that its Momentum Index declined in March for the first time in three months, by 7 percent, signaling a possible softening in demand.

Architecture firms reported "healthy business conditions" in March, said the American Institute of Architects. Its Architectural Billings Index rose to 51.9 for the month, compared to 50.3 in February — the biggest month-over-month increase since October of last year. Gains were strongest in the residential sector (described as "strong and accelerating"), while the commercial sector remained more or less stable, achieving only modest gains.

Home builders experienced another bumpy month. Figures released by the U.S. Department of Housing and Urban Development and the U.S. Census Bureau showed the number of new housing starts fell 8.8 percent in March from February.

Single-family new starts slid 9.2 percent, with multifamily close behind at a drop of 8.5 percent. Requests for new building permits also declined, by 7.7 percent. Sales of existing homes, however, rose 5.1 percent in March, finds the National Association of Realtors, slightly up from a year ago.

Although activity has fallen short of earlier expectations, industry experts maintain the outlook for the year remains positive. Based on the results of its latest Housing Market Index, the National Association of Home Builders states builders are "cautiously optimistic" about construction growth for the remainder of 2016.

Likewise, the AIA proclaims, "New single-family housing construction, in particular, is poised for healthy growth." Economists with Freddie Mac, while revising their earlier forecast slightly downward, also recently predicted housing will "maintain its momentum in 2016 and be an economic engine of growth."

Several factors lie behind their optimism. Sales, though modest, are running higher than last year. New housing starts to date are up 14 percent year-over-year in March, and requests for new permits also were 4.6 percent higher than last March. The labor market remains strong, and workers may see some modest increase in income — both usually reliable predictors of increased demand for housing.

Low inflation and economic instability internationally will likely keep mortgage rates low throughout most of the year. Some areas of the country will experience stronger growth than others, and builders can expect the seasonal ups and downs they have become accustomed to in recent years.

Overall, however, they can be confident of gradual, though modest growth, by year's end.