BSN or ADN? Nursing at a crossroads 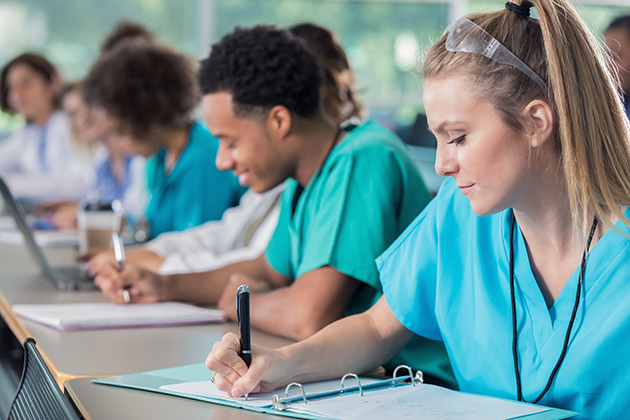 The discussion over the preferred entry-level degree for professional nurses has been ongoing since 1964, when the American Nurses Association came out in favor of the BSN. Now the conversation is heating up again, and nurses everywhere are taking notice.

In 2010, the Institute of Medicine's (IOM) report, "The Future of Nursing: Leading Change, Advancing Health," stated that the IOM and its partners (the Robert Wood Johnson Foundation, among others) were strongly advocating for the BSN to be the new entry-level degree for the profession. In fact, the report called for 80 percent of American RNs to be baccalaureate-prepared by 2020 — a goal that is far from being reached today.

With the perceived primacy of the IOM report, it was subsequently observed that many hospitals swiftly began eschewing all ADNs in favor of BSNs. Such a move was emboldened by the IOM's statistics showing lower rates of infection and mortality on units with higher numbers of nurses with bachelor's degrees.

In late December of 2017, New York Gov. Andrew Cuomo signed legislation mandating that all new nurses in the Empire State earn a BSN within 10 years of initial licensure. Dubbed "BSN in 10," the purpose of the law is to exponentially boost the number of New York’s bachelor’s-prepared nurses in an effort to shore up quality of care and outcomes.

With almost 300,000 nurses currently licensed, New York state boasts just under 10 percent of all nurses in the United States. This mandate will have an outsized impact on healthcare and the nursing profession as it comes into play.

Based on the details of the legislation, currently licensed ADN nurses and those already in school (or waitlisted for school), will be grandfathered in and excused from the BSN requirement. However, all new NY nursing school enrollees (and ADNs moving to New York from out of state) will need to earn a BSN within 10 years of their initial licensure or face the freezing of their license until they comply.

There is bound to be confusion over the law's enactment and enforcement. There will also no doubt be other states following the same path after New York's 14-year debate that led to this landmark decision.

The ongoing online conversation about the BSN/ADN argument is currently heating up as nurses around the country catch wind of what recently occurred in New York.

Some nurses argue that the BSN is hardly affordable or practical for hard-working nurses to achieve while supporting their families and earning a living. Others opine that bachelor's-prepared nurses are less clinically astute than their ADN colleagues.

With the increasing risk of a widening nurse shortage, some nurses feel that New York will eventually revoke this law when a rapidly aging population cannot be fully cared for by a workforce curtailed by dint of the government legislating nursing educational achievement.

Furthermore, even if current associate's-prepared nurses and students are grandfathered in, many employment doors will likely be closing to them as healthcare facilities adopt BSN-only hiring practices. This could backfire on quality of care if a nursing shortage is thus exacerbated.

The future is unwritten

The aging of the United States is a given, as is the necessity of having plentiful nurses to care for that exponentially expanding population.

As the demand for bachelor's-prepared nurses increases, only time will tell how the healthcare system writ large will respond. This concerted push for more nurses to hold a bachelor's of science is a grand experiment with an uncertain overall outcome, as well as strongly divided camps both for and against such a movement.

Nurse leaders, nurse educators, clinical nurses, hospital administrators and other parties with a stake in nursing's future will no doubt be watching these developments closely. The jury is currently out, and judgments will be passed as the anecdotal and evidence-based data is collected, examined, published and shared with the wider community.

The future of nursing is indeed bright, but the ways in which we educate and license our nurses may indeed undergo a major transformation in the near future.