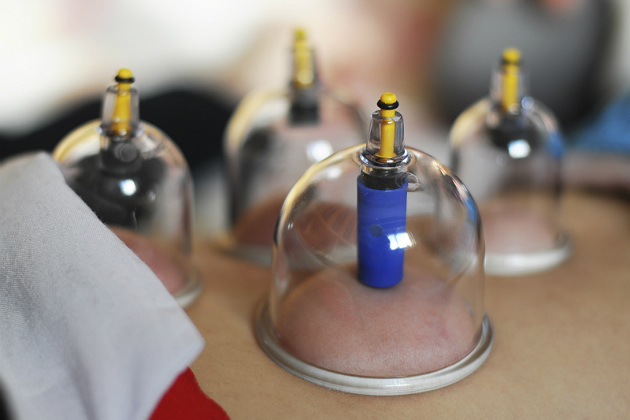 The traditional Chinese therapy of cupping gained worldwide attention at the Rio Olympics.

Alternative therapies hit the news during the 2016 Summer Olympic Games in Rio de Janeiro, Brazil. Athletes in many of the disciplines were spotted sporting evidence of these varying techniques below.

But do they really work on a physiological level or is it just hype? Or perhaps a psychological boost?

Here are six of the most commonly used and discussed therapies, including what they are, who used them, why they use them and the evidence for or against.

Cupping is the one that really hit the headlines, thanks to a certain American swimmer named Michael Phelps. But he's not the only one at it. U.S. gymnast Alex Naddour has also been receiving this slightly bizarre treatment in a bid to ease muscular aches and pains.

Cupping involves using glass "cups," which are heated inside and then applied to the skin, resulting in a suction effect. While it may be a new concept for many people, cupping actually dates back 2,000 years and is a traditional Chinese therapy.

The idea of cupping for these athletes is to promote faster recovery of the muscle tissues, readying for the next round of training or competition. Clearly those who use it believe it aids their performance, with Naddour stating "(cupping) provides relief from the soreness and pounding that comes from gymnastics. It has saved me from a lot of pain."

Proponents claim this is achieved by increasing blood flow to the skin, as can be seen in the circular bruises the cups leave behind.

In reality, there is little data in its favor. A 2015 review article of 75 studies on Chinese medicines concluded that a temporary relief in pain may be expected following cupping treatments to the neck or lower back. But there is scant evidence for any further physiological benefit.

Much better known by the name "kinesio tape," this brightly colored tape could be seen on the bodies of many an Olympian. It was perhaps most prominent in the beach volleyball competitions, although could also be spotted on many track and field athletes.

Manufacturers (Kinesio Tape, KT Tape, RockTape, etc.) claim it has many functions, including reducing muscle tension, increasing blood flow and lymphatic drainage, increasing muscle function and supporting injured muscles. However, there has yet to be any definitive evidence from the science world.

One thing that can be proven however is its popularity. It featured heavily in the London 2012 Games, and it certainly doesn't appear to have lost any great proportion of its fan club four years on. So while the jury is out in terms of physiological effectiveness, many an athlete will swear by it to aid the function of their worn-out muscles.

Massage has been around for thousands of years as a form of treatment for the body and mind. Professional athletes have regular treatments to help their muscles and other soft tissues recover from training and competition, to help prepare them to compete and to aid in injury treatment.

It tends to be something that takes place behind the scenes, either before competition in the athletes warm-up areas, or as a routine part of training with their physical therapist. Therefore, it's hard to know exactly who uses massage as part of their routine, and it leaves no obvious signs such as the circular cupping marks.

Massage has been proven to increase blood flow and improve lymphatic drainage. These functions are important in recovery to bring in new, nutrient-rich blood and flush out metabolic byproducts. It also helps to stretch out muscle and fascia and to break down any adhesions or scar tissue developed from heavy training and injuries.

Acupuncture is another ancient Chinese therapy that is still used today by our Olympians. However, it has evolved into two distinct forms — the traditional Chinese form and a more modern, westernized medical form. Most would refer to the latter as "dry needling," and it is this which will be used more regularly by athletic trainers, physical therapists and the like.

In dry-needling, very fine needles are inserted through the layers of skin and fascia directly into trigger points (aka knots) within the muscle. This can help to alter the perception of pain and reduce muscle tension.

There is some positive evidence to demonstrate the effect that acupuncture in this form can have on pain levels (read it here). However, it is unlikely to have any effect on function in terms of muscle flexibility or strength.

Diving is the sport where hot tubs were regularly seen. Before and after a dive, competitors were seen hopping into or out of a nice warm bath. But why?

Heat has long been a treatment for muscular aches, pains and stiffness. The warmth seems to ease the muscles and make them feel relaxed. Warmth also increases vasodilation, which brings with it fresh blood and everything it contains to maintain muscle function and help it to perform and recover.

Once again, evidence exists to suggest heat can help to reduce lower back pain, but not much else. However, in the case of Rio many swimmers and divers had commented that the pools were a little colder than they would like. So it could just be a case of warming up again in between dives.

The exact opposite of the above and far less pleasant experience is the ice bath. While this is not usually seen as a treatment, I can guarantee that many an ice bath was used behind the scenes in Rio.

Ice baths are used as a recovery tool, post-exertion, to speed up recovery. These would have been used the most by athletes who were partaking in multievent sports, more than one event or events with multiple rounds. The theory is that dunking the body in cold water causes vasoconstriction (narrowing of the blood vessels) and reduced metabolis, which together help to flush out waste products and reduce inflammation.

Once again, there is some support for their use, although there is also research that dispels this evidence, so the jury is certainly out on this one. Some athletes seem to swear by an ice bath after competition while others find the benefits, or lack of, not worth the discomfort.

Having reviewed these different forms of therapy, it appears solid scientific evidence to support their use is lacking. So why do top-level athletes — and more importantly their trainers and therapists — keep using them?

The answer more than likely comes down to positive experiences. Many of these treatments have been around for thousands of years, before scientists started trying to prove the value of everything. Even with the newer therapies such as elastic therapeutic taping, the product came first and then the science world started testing.

Imagine you have found a treatment that feels as though it helps your performance and boosts your recovery. Maybe it eases some pain or stiffness from an old injury. Then somebody else comes along and tells you it doesn't work. But you've felt it for yourself and believe it helps you. What do you do?

When the difference between winning and losing is a fraction of a second or an extra few millimeters, it is no wonder athletes are looking for anything that can give them the edge over their rivals. Some of the therapies listed here are proven to have some positive physiological benefit, which could help the athlete to perform at his/her best. For others, this evidence is lacking.

However, the placebo effect cannot be ruled out. If an athlete feels a certain treatment helps him/her to recover quicker, avoid injuries or even allows him/her to perform with an injury, then there is something in that. The psychological boost gained from this belief in itself can make a huge difference. We all have our superstitions and quirks — athlete or not — things we believe make us feel better, more confident, more relaxed.

And when years of training come down to those final moments, any advantage — whether perceived or real — can be the difference between gold and silver.