Blades inside the cabin: The next step in air medical services 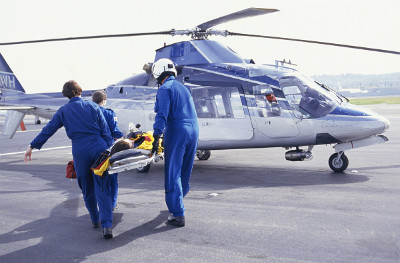 Earlier this year I wrote about the growing trend of performing airborne blood transfusions on trauma patients. What's the next logical step? Airborne surgery.

Performing life-saving medical procedures in the air is not a new phenomenon — the U.S. Air Force has been doing it for years. Over the last decade, the practice has spread to the civil sector, mainly in specially-equipped airliners turned into air ambulances.

When the Asian tsunami hit Thailand in 2004, a Finnair Boeing 757 was converted into an air ambulance to evacuate the most severely injured Finnish nationals back to Helsinki, becoming a flying ICU. While airborne, the 37-member medical staff maintained airways and performed various surgeries to repair wounds and repair fractures.

And you don't need the massive cabin of a converted airliner to perform life-saving procedures.

In 2012, a BMW convertible collided with a Ford outside of Barmston, U.K. The occupants were severely injured, and a Royal Air Force Sea King helicopter was called in to evacuate a passenger in the BMW who was just barely alive with a grave chest injury. During the nine-minute flight to the Hull Royal Infirmary, doctors aboard the Sea King successfully operated on the passenger to relieve pressure on his lungs.

Granted, a Sea King — the same basic airframe that is used to transport the President of the United States as "Marine One" — has a bigger cabin than the average civil medevac helicopter, but certain exigent procedures can still be done on the scene or in flight.

Recently, London Air Ambulance performed roadside balloon surgery on a trauma victim to control internal bleeding. The resuscitative endovascular balloon occlusion of the aorta (REBOA) was a success, and London Air Ambulance now performs the procedure on patients with severe pelvic hemorrhaging. During REBOA, a balloon is fed into the bottom end of the aorta and inflated, temporarily staving off blood supply to damaged blood vessels. Medical technicians were trained on the procedure by the Royal London Hospital.

London Air's medical director, Dr. Gareth Davies, points out the obvious benefits of being able to administer these procedures on scene or enroute.

"Being able to effectively manage blood loss at the scene is a significant advancement in prehospital medicine," Davies said. "We believe the use of REBOA can lead to a reduction in the number of patients who quite simply bleed to death before they have the chance to get to hospital where there are highly developed systems for stabilizing and preventing blood loss."

More than 2.5 million people bleed to death every year. Like carrying blood aboard helicopters, having medevac crews trained in procedures like REBOA could save countless lives.