Bison on the mountain 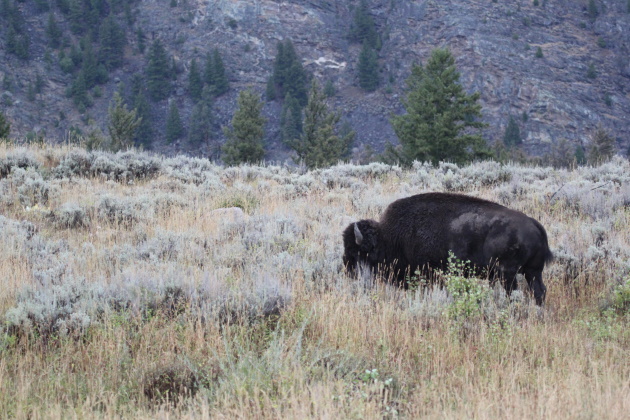 This bison was feeding at an elevation of 10,000 feet. This bison had the darkest coat of any the author has ever seen.

The unmistakable silhouette of a bull bison caught my attention.

Enshrouded in a rainy mist, the curving horns, broad shoulders and massive hump were a perfect picture of nature’s strength.

Seeing bison at Yellowstone National Park was not surprising. After all, it is the epicenter of their remaining wild range.

Seeing one near a mountain’s peak at an elevation of nearly 10,000 feet, however, was not expected.

I ventured on this particular range in search of bighorn sheep and instead found bison, and, in this case, a rather large one.

The story of the bison in North America is a well-documented example of tragedy and triumph.

A government-subsidized push to slaughter them to remove the lifeblood of the plain’s tribes pushed through the 1800s like a freight train.

With deadly proficiency, they decimated the herd from 30 million to an estimated 325. The author found this lone bull taking a drink from the Gibbon River.

My generation’s view of bison and their habitat mainly comes from the iconic film “Dances with Wolves.”

Besides introducing the Lakota word for bison, “Tatanka,” into the vernacular, it also gave us the idea that American buffalo are a creature of the flat lands.

The Academy Award-winning movie was filmed on plains in South Dakota and Wyoming.

After my Yellowstone encounter, I began looking at locations of wild bison herds and found many are in mountainous areas.

There is the Yellowstone herd that ventures into the high country and bison in the Henry Mountains and Book Cliffs in Utah and other adjoining ranges.

Native Americans used to drive the animals off of cliffs to kill them for food and other provision. Historians call these areas “buffalo jumps.”

The highest known site is at 11,000 feet in Wyoming’s Wind River Mountains.

I never did find a bighorn on the trip, but I had an incredible time seeing bison on the mountain and also in the valley below.

Before my time at Yellowstone was up, I saw a large herd of bison in the Lamar Valley. They were 3/4 of a mile away but I decided to shoot photos with my 400 mm lens anyway. There are more bison in this photo than existed at one point in the 1800s.

After a few shots,I decided to take out my Leupold 10X 42 binoculars and count the herd.

That was more bison than existed in the United States at one point in the 1800s.

It was an emotional moment as it hit me. We almost lost these great animals and that visionary hunter-conservationists like Teddy Roosevelt and the Boone & Crockett Club helped save Yellowstone by making it a national park and the bison contained within.

I am grateful we now have as many as 500,000 bison throughout North America and am inspired by plans to put wild herds back into their former range.

Thank God for the bison on the plains and on the mountains.