Big changes may be coming to how pharmaceuticals are made 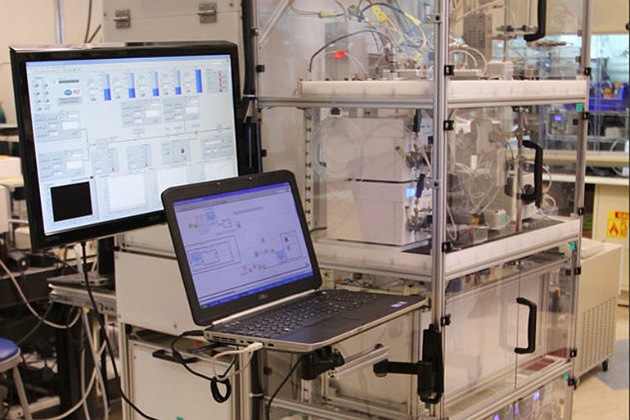 Before there were drug companies, there were medicine men, shamans and doctors with limited training. Nevertheless, the manufacturing of drugs has remained virtually unchanged for centuries.

Back in the days when drugs were first made from plant extracts, they were processed in a batch — albeit with limited ingredients. Today, we still make drugs in batches, but the batches are many times larger and have lots more ingredients.

"For roughly two centuries, to be honest, the way that we tend to do chemistry is in flasks and beakers and that sort of thing, and we call that batch chemistry — one batch at a time," Tim Jamison, a professor of chemistry at MIT, told NPR.

"That's the way virtually all pharmaceuticals are made. Big batches of chemicals are synthesized, then they have to cool down, then are synthesized again to create new compounds. Then those compounds have to crystallize, filter and dry. Powders are added to make a tablet or capsule. These steps that can take months."

But Jamison and his research team have created a new way to make medicine. Their manufacturing unit is about the size of a refrigerator and can be deployed around the world if ongoing research concludes successfully. The new technology can even make up to 1,000 doses a day — this often exceeds the production capabilities of pharma manufacturing facilities.

The research team nicknamed their technology "pharmacy on demand." To date, the unit can only make liquid versions of medications. The drugs that have been successfully made are generic versions of:

The obstacle to speed in batch processing is that the cooling in vats takes a long time. In contrast, the flow system allows reactions that create large amounts of heat to safely run in the small tubes. By changing configurations in the modules, the new configuration allows for making a different medication.

The manufacturing process takes place in two chambers where the chemical reactions occur that synthesizes medications. The first chamber lets reactions occur at 250 degrees Celsius and pressures up to 17 atmospheres.

The second chamber completes the process by allowing the raw drug solution to purify via crystallization. It is then filtered and dried to remove the solvent. The drug is then formulated as a liquid. An ultrasound monitor ensures the drug solution is at the right concentration.

What makes pharmacy on demand useful?

While Novartis participated with MIT on the initial research, the Defense Advanced Research Projects Agency (DARPA) is funding another round of research.

DARPA's interest is for deployment of the portable manufacturing unit to get drugs to combat fronts quickly where they can be made on demand. But, other uses include:

Based on the research and the creation of the process and the manufacturing unit, hospitals and pharmacies might make their own pills. Pharmacy companies participated in the funding of this project at MIT, but they fear the very equipment they helped create.

There are two things that are particularly vexing to pharma companies:

Those folks over at MIT have some solutions, though.

While other researchers work on solving these issues, Jamison and his team will continue to find ways to further reduce the size of these new manufacturing devices.