Beyond a ‘Shadow’ of a doubt 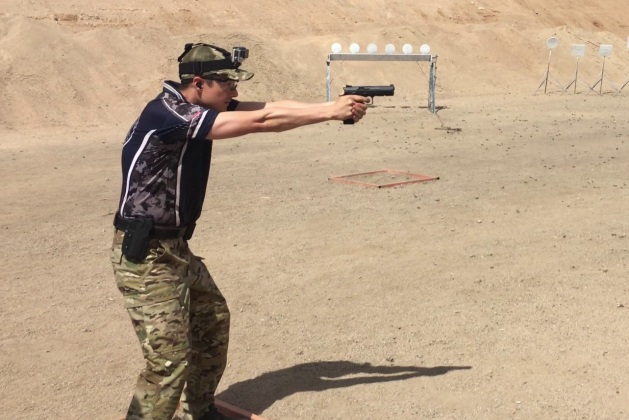 “The pistol the rest of the world’s police forces use” is the way I most often describe my CZ pistols to those in the U.S. unfamiliar with the CZ 75 platform.

For various reasons, the CZ 75 is generally unknown to the average firearms user and unfortunately, the majority of the U.S. market is missing out on a truly outstanding brand. I fell into that category myself until my exposure to the competition shooting world introduced me to this new and outstanding series of pistols.

The CZ 75 pistol was first developed in 1975 by Česká zbrojovka Uherský Brod (CZUB) in what is now the Czech Republic. Upon its introduction, it was considered one of the original "wonder" nine-millimeter pistols.

The wonder part was due to most of American law enforcement utilizing six-shot revolvers and the double-stack magazine capacity. Double-action first shot trigger pulls seemed to bring the best of all worlds to law enforcement officers. Many police forces around the world adopted the platform and still carry the modern-day variant of it to this day.

Outside of law enforcement, the popularity of the International Practical Shooting Confederation (IPSC) saw widespread adoption of the pistol in the competition shooting circuit.

Fast-forward to the present day, and a browsing of the top competitors in USPSA and IDPA will reveal many of the top shooters are utilizing a CZ platform in the Production and SSP Divisions. The two most popular variants are the CZ Shadow SP-01, which was developed as a truly do-all pistol with input from law enforcement, the military and competition shooters.

I am a believer in the "one gun" philosophy and try to find a gun that will allow me to participate in as many competitions as possible. Between the SP-01 Shadow and the Shadow 2, I was torn between versatility and comfort.

The SP-01 allowed me the most options in shooting competitions. The SP-01 is legal in USPA Production, IDPA SSP and ESP, NRA TPC and 3 Gun Tactical/Limited Divisions among others. These were the divisions and organizations I compete in the most. The CZ SP-01 is one of the "winningest" pistols in USPSA, IDPA and IPSC history in its respective categories.

The Shadow 2 is too heavy for IDPA, but is USPSA Production and 3 Gun Tactical/Limited Legal. It is also branded as a "Competition" pistol which makes it NRA TPC ineligible. Despite the Shadow 2’s more limited competition categories, I couldn’t ignore the fact that I just picked up the Shadow 2 and shot it well at the USPSA Nationals.

I was torn between the two choices, and after a talk with my wife and fellow shooting writer Amanda Fry; I decided the best course of action was to purchase both for a true side-by-side comparison. 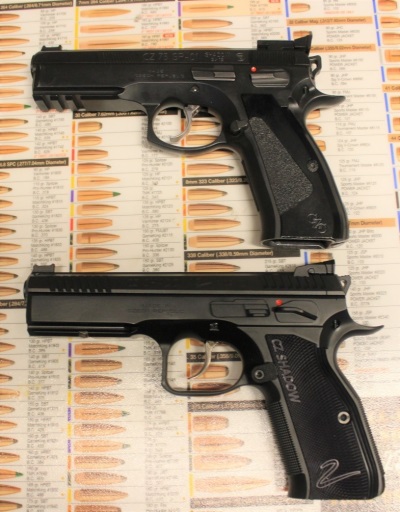 The Shadow and Shadow 2 side-by-side.

I found a great deal on a used CZ Shadow SP-01 on the BrianEnos competition shooting forums, and the pistol was available right here in my home city of Phoenix.

Next, I purchased a brand-new stock CZ Shadow 2. A trip to CZ Customs in Mesa, Arizona, saw a switch to an 11-pound hammer spring, 11-pound recoil spring, an extended firing pin and reduced-power firing pin spring. This yielded an approximately 7.5-pound double action trigger and a 3.5-pound single action trigger.

Each of these springs and upgrades impact the pistol in different ways that I will detail in a future article.

The stock triggers on these two pistols are long and heavy, and most shooters will immediately start to tweak them, which I highly recommend. Most of these changes are spring related and run about $40 with outstanding results.

The other changes, such as the competition hammer, short reset disconnector, and internal polishing require a deeper understanding of the pistol and are for advanced users or a gunsmith to attempt.

Upon picking up the pistols, the differences between the two are immediately apparent. The CZ Shadow SP-01 weighs in at 2.35 pounds (37.6 ounces) and is a subjectively "perfectly" balanced pistol. Both grips are the exact same diameter but the Shadow 2 has a "deeper" trigger guard undercut and back strap cut that gives you a feeling of really getting the weight of the pistol over the top of your hand.

This weight is definitely felt due to the Shadow 2 weighing in at 2.70 pounds (43.2 ounces). You can really feel the extra weight out front due to the slightly longer barrel and slide. The Shadow 2 barrel is coming in at 4.89" vs. 4.61" of the Shadow.

The grip width is the same, but the Shadow 2 has a wider slide profile.

Outside of the obvious weight differences, you can feel a definitive difference between the grip texturing of the two pistols. The Shadow 2 has a noticeably more aggressive front strap checkering.

Initially, it feels like a cheese grater against your hand when comparing the two pistols. The slide of the Shadow 2 is wider and more angled than the Shadow SP-01. When feeling them side-by-side, I felt it was significantly easier to grip the SP-01 slide.

The Shadow 2 slide feels uncomfortable at first to grasp and rack the slide due to its minimal surface area. I would have preferred the boxier slide of the Shadow on the Shadow 2.

The Shadow 2 ships with an optional extended thumb safety, and I immediately installed it upon receiving the pistol. 3 Gun competitions require you to abandon your pistol with the safety on, and anything that allows me to engage the safety easier is a plus in this category. The extended thumb safety also gives you the ability to carry it in single action only mode akin to a 1911 being "cocked and locked."

The enlarged Shadow 2 thumb safety is a 3 Gun necessity.

If you are going to use the Shadow 2 for 3 Gun, I would recommend installing an increased safety detent spring by DSPerman.com to keep it from accidentally bumping off when abandoning the pistol into a dump box (ask me how I know).

After shooting these pistols side-by-side in a competition setting, I have made the following observations: The CZ Shadow is lighter out front making it easier to transition target to target. The weight of the Shadow 2 soaks up recoil better and is more consistent for sight tracking due to the increased weight out front.

The Shadow slide is easier to grasp but under the clock, the two pistols appear identical in ability to rack the slide. A fully tricked out CZ Customs SP-01 is almost $300 cheaper than the CZ Customs Shadow 2 variant. There are other custom CZ builders but this will hold true amongst the major ones.

Taking all these things into consideration, I feel that the CZ Shadow SP-01 is the best buy in competition shooting as it features the lowest cost, most versatile division eligibility and accessories on the market.

With that being said, I shoot the Shadow 2 better and would choose it every time over the SP-01. This is another example of logic versus feelings making the ultimate decision.

One thing I am certain of, I will never go back to my Glock platform outside of work again. The weight, trigger and accuracy of the CZ platforms leave the Glock impossibly in the dust and I, for one, will never look back.