Beneath the Arizona skies: A Colorado River road trip

It was a gray morning as we left Sierra Vista and the headed north up the San Pedro Valley. The sun was just beginning to rise above the Dragoon Mountains, casting a warm glow on our SUV. Interstate 10 this Sunday morning was light of traffic all the way to Interstate 8. We are not fond of I-10 north of Tucson, a hazardous three-lane highway in many places, with most people driving like crazy fools. This morning, the fools are still sleeping and we feel safe.

Interstate 8 is an east/west highway taking one into California through lower Arizona. As we passed the desert town of Casa Grande, tall saguaro cactus fills the land. Later we crossed the great Sonoran Desert National Monument, a section of landscape most travelers are just happy to get across; it is hot barren wilderness, a countryside where sudden and fierce blowing sand makes driving hazardous. Today is not one of those days, a cool breeze across the desert floor makes it a most comfortable drive.

Just east of Gila Bend we connected with Route 85 North, a well-paved two-lane road toward a reconnect with I-10. The countryside is primarily farming or better still cow country. We must have passed a dozen holding areas of Holstein. Hundreds of cows, not cattle, milk cows crammed into holding pens with piles and piles of what looked like cow poop. Seeing these animals clustered together in such abusive manner disgusts and disturbs me.

Connecting again with I-10, east/west traffic is running heavier out of Phoenix, as many California drivers are heading back to their state. Just before reaching the Colorado River we travelled north on Rte. 72 towards Parker, a nice little town on the river.

We were most impressed with Rte. 95 as we headed towards Lake Havasu City, the natural lay of the land, the river and high stone cliffs, and the twisting and turning highway made travel enjoyable. We were surprised to find such a large number of state parks and private resort along the river. It’s a very popular area in the winter, hundreds of motor homes were lined up along the river’s edge. 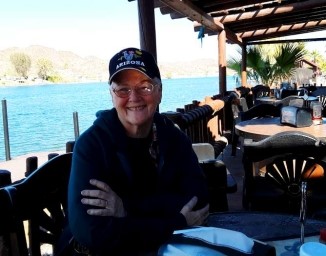 A colorful sign worth investigating caught my eye. The establishment was called “Pirate Den Resort.” The resort is located right on the shores of the Colorado River composed of a very modern RV facilities, the Jolly Roger Daiquiri Bar, and the Black Pearl Café and Restaurant. We attempted to have lunch on the riverside deck; unfortunately, the river breeze drove us inside to a warmer calmer environment. Lunch was reasonable and very tasty. We would plan a stop again when ever in the neighborhood.

We reached Lake Havasu City in midafternoon, discovered a comfortable motel on the river and had time to venture out and discover fascinating and curious places, there were many. Lake Havasu is a large reservoir formed by Parker Dam on the Colorado River, on the border between California and Arizona. It’s known as a base for trails in the nearby desert and water sports on Lake Havasu.

London Bridge, relocated from England, is a major attraction that links the mainland to marinas in a looped path in an area known as “the Island.” We spent most of our afternoon searching out all the cafes and outdoor facilities in and around the western side of the bridge. It was a fun day.

We left town after breakfast heading north to the Historic Route 66 highway. Diane and I have travelled many parts but never across the Black Mountains. We crossed the river into California and visited the small community of Needles where gasoline was selling for $4.599 a gallon. WOW!!

Back in Arizona, the village of Oatman was one of our finest discoveries, where wandering wild burros share the street and walk around begging for food on this dusty desolate stretch of Route 66. Travelling the mountains was very pleasurable, the average speed was about 15 mph, and the number of enchanting mountain panoramas was many.

We followed Route 66 for many miles stopping here and there for gas, food or picture-taking. We arrived in Prescott late afternoon spending the night in a Best Western. After checking in. we immediately headed for the downtown area and historic Whiskey Row. This is “the place to be” in the evening — it is known for its shops, bars and live music quarters. One of our preferred stops to quench our hunger and thirst is the Prescott Brewery, located across from City Hall on Gurley Street.

Each time we visit Whiskey Row we discover something new; this time was no different. We entered a building called the Old Capitol Market and found a new world family of shopping treats. Within these walls are numerous items of delight, from a wonderful selection of spices, pickles, coffee, salsas, to unusual gifts and gadgets. In the basement, we discovered a uniquely designed bar called the Superstition Meadery and bartender Nathan Boeker. 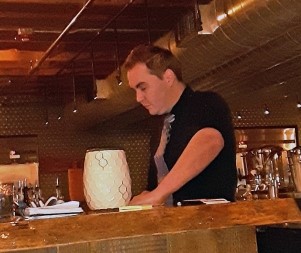 Nathan explained that “mead” is an alcoholic beverage created by fermenting honey with water, sometimes with various fruits, spices, grains, or hops. The alcoholic content ranges from about 3.5% to more than 20%. Conjuring images of medieval knights and fierce Norseman, mead, also known as "honey wine," is believed to be the world's oldest alcoholic libation and one that's generally associated with eras past.

Mead isn’t just the drink of Greek gods and mummified kings, as we now know. There are now almost 250 meaderies in America, and the resurgence of this radiant juice seems assured due to continued interest in craft brewing and distilling.

The next morning, a sunny Arizona day we headed home having experienced a wonderful road trip “beneath the Arizona skies.”