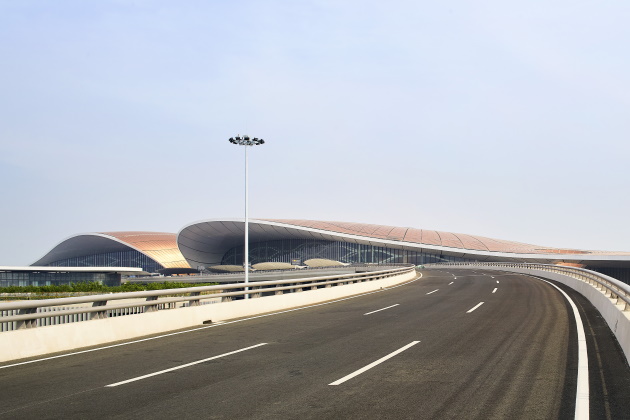 Built to relieve pressure in one of the world’s busiest cities for air travel, the new Daxing Airport near Beijing formally opened last week, with the first passengers boarding one of seven flights on the day of opening.

With its iconic starfish-shaped terminal and world-class design, Daxing is set to become one of the world’s major air hubs.

It was built as the city’s Capital Airport, which has been steadily rising in the rankings of the world’s busiest airports — and is already the busiest in Asia — has started to reach a saturation point. China is expected to become the largest aviation market in the world by 2022.

Daxing is located around 30 miles (48 km) south of Beijing and has four runways. Its unique terminal design by late British-Iraqi architect Zaha Hadid has a layout thatmaximizes space.

Five giant piers radiate from a central point, linking to 79 aircraft gates. The design means passengers have the shortest distance possible to their gate from the check-in area, with a maximum walking time of eight minutes.

The terminal has a capacity for 72 million passengers per year, but this will rise to 100 million in time. Its central area is referred to by the architects as a "central orientation space dome" and features a glass roof above the four-story interior, which has wide open spaces and public areas, as well as the usual food and retail concessions.

A sixth pier completes the starfish design and is located landside. It connects the transportation hub to the airport, featuring a rail and metro station, as well as hotels and offices.

The high-speed train network linked to the airport can whisk passengers to central Beijing in only 20 minutes, while nearby cities like Tianjin and Hebei are easily reached by rail and road from the airport.

The opening ceremony of Daxing International Airport was conducted by Chinese President Xi Jinping on Sept. 25. The day marked the first passenger operations from the airport, with a modest seven flights scheduled, mostly to ease the facility and staff in without becoming overloaded. 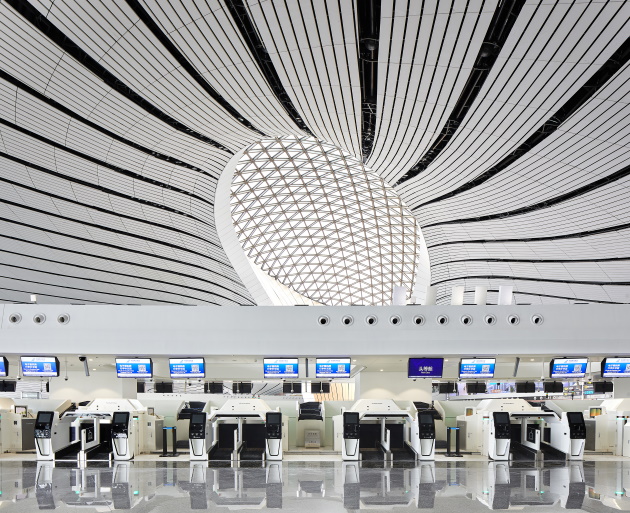 China United Airlines also operated on the first day. Its presence is symbolic, as it will soon vacate the much older Beijing Nanyuan Airport closer to the city center. That airport has closed following the opening of Daxing. The airline will eventually operate 80 routes from Daxing.

Other airlines will transfer to the new airport more gradually, with Air China, Beijing Capital Airlines, China Eastern, China Southern, Hebei Airlines and Juneyao Airlines all operating jointly with Capital Airport initially. Some international carriers like British Airways, Finnair, LOT Polish Airlines and Royal Brunei Airlines will also use the new airport from the start of the winter timetable at the end of October.

With Beijing Capital’s large Terminal 3 building only 11 years old, and its other terminals having been refurbished within the past 20 years, the opening of Daxing will not herald the end for the older airport just yet. Air China will retain its foothold at the older airport, with only a small number of routes from Daxing.

With China facing unprecedented growth in air travel and demand from both business and leisure users, the two airports will provide a combined 170 million-passenger capacity and help reduce slot constraints and waiting times.