Back to basics: Review these fundamentals for shooting success 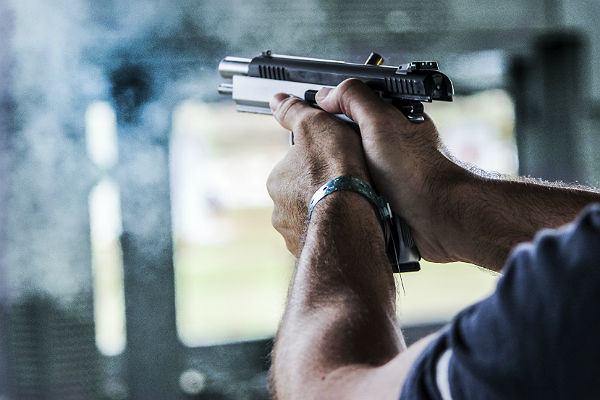 At the beginning of every year, I like to review marksmanship fundamentals. These fundamentals form the foundation for all accurate shooting, but they are something many overlook.

I continue to be amazed at how often I hear competitors say, "I've never zeroed the sights on my pistol." The ability to hit a target on demand starts with zeroing (or sighting in) your pistol for the ammunition you are shooting.

If you have not zeroed your pistol with this ammunition, you have only a vague idea of where the shots will hit in relation to your sight picture. The difference between point of aim and point of impact will grow with distance and may result in you missing the target entirely.

It takes a minimum of 10 shots carefully fired at a target (ideally using a solid rest or sand bags to minimize pistol movement) with the ammo you intend to use to verify point of impact. After firing these shots, make your sight corrections based upon the center point of the group you fired — ignore any shots that are obviously the result of shooter error.

Zeroing your carry pistol for your self-defense/carry ammunition is even more important. Different brands will shoot to different points of impact — the difference can be critical if you must take a precise shot. If you practice/compete with your carry pistol (and you should do this on a regular basis), zero the sights for you carry ammunition and then memorize the point of aim/point of impact difference for your practice ammunition.

Every time someone fires a pistol, the bullet hits ... something. Of course, the key is an ability to hit what we want when we want and is critical to every shooting situation. The inability to fire an accurate shot on demand will hold you back in mastering every other pistol skill you need to acquire.

The faster the shooting speed, the more important it becomes to fire each shot without disturbing pistol's the stability and alignment. To quickly hit a target, the shooter must condense the act of firing an accurate shot down to a short time frame; however, the fundamental process is the same.

The ability to hit your target and execute various gun-handling skills — such as a draw, reload, engage moving targets, etc., must coexist. However, don't try to develop them simultaneously. Each skill has to be developed and practiced separately.

Certain skills are more easily acquired through dry practice, because recoil can mask some problems. For instance, you can send your shots to the lower left or right by changing your grip pressure as you pull the trigger — something you probably will not feel when the pistol recoils. Dry practice allows you to concentrate on a specific skill and reduces the possibility that you might misinterpreted feedback that other variables produce. 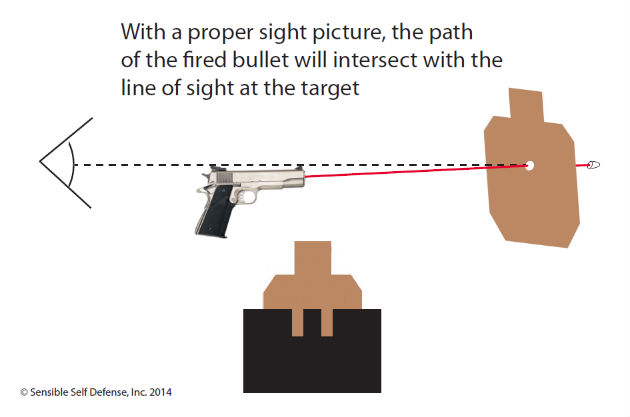 This is a fairly easy concept to understand. Are you fully aware of the front sight for every shot? Can you see it on demand at speed? Dry practice helps us refine this skill as you practice drawing the pistol and acquiring proper sight alignment. Aligning the sights at speed is simply knowing what you need to see and then confirming that you see it as you press the trigger.

You can have the perfect sight alignment and picture, but if you jerk the trigger, you'll likely miss the target. Pulling the trigger on a semi-automatic is a two-step process; taking up the slack or pre-travel, then pressing the trigger to the rear to fire the shot.

The pre-travel is the distance the trigger moves from its forward-most position to the point where the shooter feels the sear's resistance. The weakest area for most shooters is an inability to take up this pre-travel without actually releasing the sear (and thereby firing the shot). Prepping the trigger means learning to pull through that free movement and hold against the weight of the sear engagement.

You should be aware of this every time you fire a shot, regardless of how rapidly you are shooting. It does take time to learn this skill, and it only comes with practice. It is also a progressive skill — start with slow fire and only speed up when you can prep the trigger without disturbing the sight alignment/picture. Prepping the trigger forms the foundation of proper trigger control; eventually it will become a conditioned reflex.

Once the shooter preps the trigger, pressing through to fire the shot is the next step. Your trigger finger should begin to exert pressure straight back until the pistol fires. Ideally, the middle of the pad of the fingertip should be 90 degrees to the trigger, which enables you to press the trigger straight to the rear. Then, release the trigger at the same speed in which it's pressed, keeping the finger in contact as it returns.

The term "press" should not be misinterpreted as being a slow-moving process. "Press" implies that increasing the level of pressure against the trigger is done as a smooth acceleration. However, you must do this in a predictable pattern regardless of its time frame: pressure increases progressively until the shot breaks.

Many people under- or over-grip the handgun. Bull's-eye shooters, for example, typically are not overly concerned with controlling recoil for immediate follow-up shots, and therefore tend to have a lighter grip on the pistol. Many believe a death grip on the pistol will prevent recoil. However, no matter how tightly you grip it, the handgun will still recoil and an excessively tight grips often prevents a stable sight alignment/picture.

The proper grip tension is about the same pressure you'd feel when holding a hammer to drive a nail. Additionally, the pressure in both hands must be equal to help ensure the gun tracks consistently straight up and down during recoil. Gripping the gun with correct tension will allow the hand to recoil in concert with the pistol and allows proper trigger control. When the firing hand is not trying to choke the life out of the pistol, the trigger finger is free to move smoothly, quickly and precisely.

A proper grip when combined with a proper stance will enable you to effectively deal with muzzle rise. As you relax and see a predictable pattern, you will start to see the sights through the entire recoil cycle.

Inexperienced shooters try to reduce muzzle rise thinking that it will enable them to shoot faster. However, the speed and consistency with which the pistol returns into alignment that determines how quickly the shooter can fire the next accurate shot. With practice and proper stance, the recoil pattern will become predictable and the sights will then automatically return back into alignment.

Grip the gun as high on the frame as possible with the shooting hand indexing against the beavertail and making full contact with the rear of the frame. If your hand size permits, extend both thumbs toward the target along the slide or frame while being careful not to press them inward. Inward pressure against the slide/frame can influence the tracking of the gun in recoil and cause malfunctions.

Hand size is an issue for some people. For example, as I learned to shoot the Springfield XD pistol, I found it impossible to not press the slide release with my normal grip. I had to teach myself a slightly different grip to enable the slide to lock back on the final round. I don't have this problem on the 1911 or the S&W M&P platforms.

Every physical sport has an optimal stance; shooting is no different. Just like golf, baseball, tennis, etc., the correct shooting stance provides an overall feeling of balance; it is an athletic position of readiness.

The next time you are at the range, take a moment and look at how pistol shooters are standing — you will see every variation imaginable; most are not optimal. The correct shooting stance is a progressively aggressive stance with shoulders in slightly front of ankles, ears in front of shoulders. This posture puts the majority of the body weight slightly forward and uses the body's mechanics to help control recoil.

Your spine should be relatively straight, while your knees are flexed and the upper body bends slightly forward at the ankles, not the waist. If you're doing it correctly, you'll feel tension in your calf muscles. The wider the swing needed to shoot multiple targets, the more the knees should be flexed.

It is important to remain flat-footed while the upper body is leaning toward the target. One foot may be in front of the other as in a slight karate-style forward stance. Your feet should be shoulder-width apart. A stance that's too wide will inhibit your ability to swing to shoot multiple targets and your ability to move. A too-narrow stance can cause you to lose your balance as the pistol recoils.

You must have a progressively aggressive stance to resist the pistol's recoil and maintain your balance. Do not put too much weight on the balls of your feet, this creates instability. As a test, I have novice shooters extend their arms as if they are holding a pistol and close their eyes. I then push against their hands (as if pushing them backward); without a correct stance it is easy to push them off balance.

The Isosceles, Modified Isosceles, Weaver and the Chapman Modified Weaver debate in some circles is almost as enthusiastic as the 9mm versus .45 ACP debate. There is a place for every variation depending upon the specific shooting situation, cover, ground, etc. Everyone should master all of them, and there are numerous Internet videos that detail how to do each one.

Zero your pistol, learn and use a solid stance, and practice the fundamentals of sight alignment and trigger control. Revisit these fundamentals periodically as you progress and anytime you start to drift into bad habits.

The marksmanship fundamentals form the basis of all steady, fast and accurate pistol shooting. Begin and end each range session with precision shooting practice to reaffirm your ability to place a bullet exactly where you want it.