Are your employees afraid to work together? 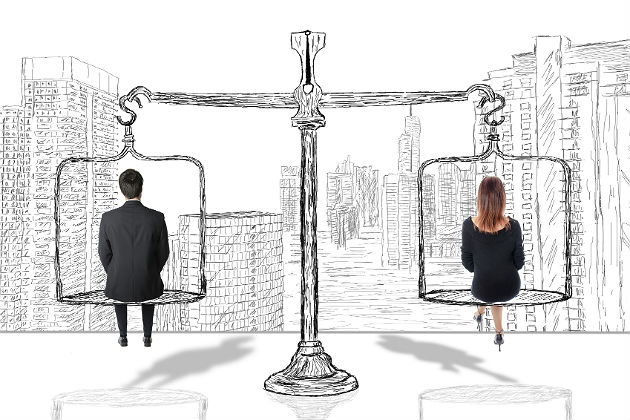 Gender equity and opportunity are still lacking in many organizations. Awareness, strategy and intentional actions to close the gaps are also lacking.

Most organizations I've spoken with have statements, posters and resource groups that support gender equity. This is good, but not enough. Without behavior changing at every level, there will be no real lasting change.

We need everyone to ensure workplaces and communities practice gender equity and develop strategies that build trust, prevent harassment, and eliminate bias every day. We have to close the uneven opportunity privilege that exists based on gender. It can’t be just a "women’s issue." Men have to step up and be allies. Allies also need allies so they don’t feel alone.

When people don’t work with someone from another gender or get to know them, it seeds distrust. We only work off what we hear about other people based on stereotypes and generalizations, and don’t get to experience people as individuals.

When I ask attendees in my programs on allyship and cross-gender dialogues how often they have had meaningful conversations about gender equity, harassment or inappropriate behavior with someone who is not the same gender, only about 20 percent raise their hands.

Research has shown that organizations are more productive and creative when people know each other. People get to know each other by sharing stories of their experiences and listening to the stories of others.

It’s easier and more comfortable for many people to share stories with people who are like them, thinking that there will be built in empathy. Sharing stories with people not like you, and not of the same gender may be uncomfortable at first, but will create new connections, empathy and stronger working relationships.

It’s important for men to hear the stories from women so they can understand what is offensive and why. They also need to learn what they can do in order to become allies.

Sabina was one of the few women in a digital marketing company. She kept getting overlooked for new projects and often felt invisible. Her manager had brought in a trainer to talk about sexual harassment and gender equity, which had little effect on her situation.

One day, she was in conversation with William, her co-worker who was telling her how excited he was to be chosen to lead a new client project. Sabina decided to take a risk and tell him the story of how all the men in the group had been invited to work on a previous project and no one had mentioned it to her.

She didn’t even have the opportunity to show what she could do. William had been oblivious to Sabina’s situation. The next time they acquired a new client as the manager was talking to the "guy," William brought up Sabina’s name and insisted they bring her in.

What stops women from sharing stories?

It is a risk to talk about issues related to sexism, discrimination and gender inequity but it’s necessary. According to four studies conducted by Elad N. Sherf and Subra Tangirala, "men often refrain from participating in or speaking up about gender parity initiatives because they experience lowered levels of psychological standing than women — that is, they feel that it is not their place to engage with those initiatives."

They don’t think they have a "right" to intervene or speak up, and they don’t want to say the wrong thing and be chastised. When men hear stories from women, even men who showed little interest in gender parity may feel more involved and are more likely to become active allies.

How do we build a culture of allies across gender?

Women need to become allies to each other across race, ethnicity, age, gender identity, etc. Listen to each other’s stories and understand that no one is just one identity and there are multiple ways to connect and find commonalities. Women, men and people who are gender nonconforming have to support each other if we want workplaces where everyone has the same opportunity to succeed.

Share stories with men and listen to the stories of male allies. Help them tell your stories to other men. Male allies can often have a stronger influence on other men.

Be an ally to your allies. A man in one of my groups shared that he had seen a woman being harassed and intervened. He was told by other men to mind his own business and found himself isolated. The woman who he had tried to help didn’t speak up for him because she was intimidated. Stopping harassment is not just the job of the person being harassed or one other individual. Support your allies, particularly in situations where being an ally is taking a risk.

Learn about each other. After you share your story with a male ally, let him know what you want him to do. Allies need tools. So often people don’t speak up or take action because they don’t know what to do.

Everyone wants to succeed, and if you are in a position where you have the privilege of unequal opportunity, you can use the "extra" privilege you have to speak up in support of someone that doesn’t and who could potentially be overlooked. When we lead cross-gender dialogues, we find people who want to be allies but don’t know how. We can help each other create better work cultures.

When people know and trust each other, they’re not worried about saying the “wrong thing” or afraid of working across gender. They know what is appropriate, and if they’re not sure they’re not afraid to ask, and the person they are speaking with is willing to provide the answers and education.

Gender equity and allyship are more than doing the "right thing." They ensure that your organization can reap the benefits of everyone’s potential, talent and creativity, and no one’s brilliance gets left behind.