Are we witnessing the death of Main Street, or its rebirth? 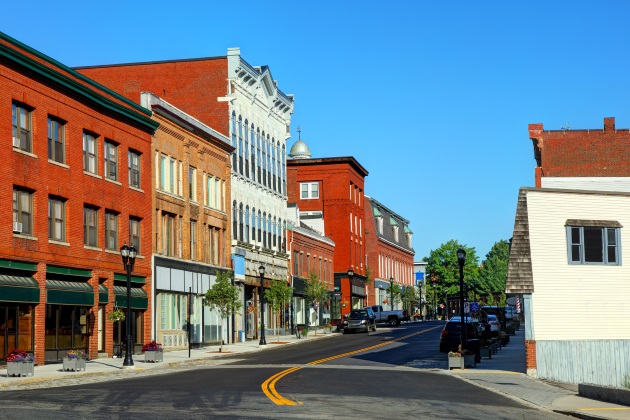 The decline of America’s downtown "Main Streets" is nothing new. First, the rise of the automobile meant they were displaced as the nexus of community and commercial life by out-of-town malls. More recently, even the malls have fallen victim to the rise of online shopping, with 1 in 4 expected to be closed by 2022.

But Main Street has always been more than a place to shop. As the place where social capital has historically been stockpiled, it has a strong hold over the American sense of identity and nostalgic imagination.

Disneyland certainly cottoned on to this long ago. This was a sense of nostalgia that the Trump campaign and presidency has also tapped into — one which (ironically, given the nature of the Trump business empire) rejects the glittering lights of big city department stores and the cosmopolitan elite that shops there, and shifts the focus to more down-to-earth, small-town retail.

The outlook for Main Street doesn’t look good, as the headlines tracking empty frontages keep telling us. But are we giving in to nostalgia too much? Perhaps the rebirth of Main Street might not look to the past at all, but to the future.

From the ‘fair trade laws’ to New Urbanism

Technology is not the only external force to batter small independent stores. The family-owned stores that we associate with Main Street have long struggled to compete with the economies of scale and depressed prices achieved by the big chain stores.

But this isn’t the first time politicians have tried to run to the rescue of small shopkeepers. The "fair trade" laws of the 1930s reined in free markets to help small Main Street stores compete with the economies of scale allowed by the chain stores by setting floors for retail prices.

Now, if you look in the right places, Main Street’s moment for intervention might have come around again. The urban planning movement known as New Urbanism, which seeks to reinvent place making using neo-traditional approaches has been trying to breathe new life into shopping streets. This is a reflection of the "outpouring of nostalgia" for Main Street, and lost downtown stores and historic shopping districts, according to historian Vicky Howard.

But rather than looking to the past, the need to reinvigorate town centers offers a chance to respond to a new set of challenges.

One common thread in the history of Main Street — from the neighborhood shops of small towns to the "palaces of consumption" and spectacle of 19th-century department stores like Wanamaker’s — is that it has always revolved around a world of things, ready for us to consume.

The New Urbanists released a typically creepy-sounding book on how to turn malls back into mixed-use "Main Street"-like districts called “Greyfields into Goldfields.” But perhaps, given the environmental emergency we are facing, the future lies in shifting the balance away from consumption and towards production, or at least social production.

In 2005, the U.K.’s New Economics Foundation released a report titled "Clone Town Britain" that categorized 41% of British towns as "clone towns." This would be the equivalent of what Howard describes as “Walmart world” in the U.S.

The NEF has instead started to hint at how we might embrace the sweeping changes that are apparently causing the “death” of the British High Street and, instead of lamenting their loss, supporting these streets in providing a radically different experience. One that is not necessarily grounded in retail.

Downtown has always been about much more than shopping. People visiting for many other reasons, not least social contact. How about we use the gaps opening up in Main Street as a crisis-born opportunity to really rethink things? Is there any reason why empty electronic retail stores can be filled by a Fab Lab or a Maker Lab? A space to experiment with vertical farms?

Community gyms and ceramics studios can easily take up units that once housed shops. Kindergartens could easily find their place, and likely provide far more accessible by public transport than they are today. Lavish independent movie theatres once brought couples and families out onto the streets of downtown — perhaps we could even dare to dream of bringing them back into use as what are known as “anchor institutions” to revive a wider High Street.

All of these non-retail uses could all remain outward facing, using active frontages to liven frontages just as shops might. They also tend to replicate experiences that cannot be found online, giving them greater resilience. They may need to be supplemented with green infrastructure to further entice people out of the malls.

These kinds of uses might need a little enticement from local government through zoning reforms, grants, or temporary relief in rates. The Meanwhile Foundation advocates for active policies that encourage the use of vacant property for “meanwhile use” projects where community groups can experiment and have some space to get a project off the ground.

The dual challenge of sustainability and inclusivity

Not only can a more pragmatic reimagining of the future of Main Street potentially save us from the social isolation of smartphones and online shopping, but it might also make some contribution to tackling the climate emergency.

Thanks to being born before the rise of the car and the suburban lifestyle that ensued, Main Street tends to be better connected by public transport. But more importantly, evidence that fast fashion contributes 10% of all global carbon emissions is bringing a recognition that we might need to radically alter our patterns of consumption if we are to stand a chance climactically speaking.

That means that Main Street, like the rest of us, has to edit its Mission Statement. I agree with Louis Hyman in The New York Times that Main Street cannot survive without looking to the future; however, we perhaps have different visions of what that future might be, and the place of consumption within it.

There is a second challenge, too. The vision presented here is one of Main Street reimagined as multifunctional, well-connected social hub.

However, one of the biggest tests in its revival will undoubtedly be making this an inclusive resurgence. There are pockets in U.S. cities and towns today where small independent stores are thriving, but where paying the price point required to fund locally manufactured goods make these enclaves of the elites. Nostalgia cannot always buy a $10 bamboo toothbrush.

Why not combat these dual challenges together and turn some of our empty units into repair cafes?

My own home country, the U.K., has been famously described as "a nation of shopkeepers." This vision has never comfortably fit the U.S., which perhaps thinks on a slightly bigger scale. But the shopkeepers still have their place in the psyche.

Are Americans really "yearning for a Main Street that never quite existed?" Possibly. But perhaps that nostalgia can be captured and brought up to date.

Trump promised blue-collar communities that the supposedly halcyon days of their heyday in the mid-20th century can be recreated, which is a false promise. Instead, a more ground-up reimagining of our High Streets can accommodate better some of the trends that are causing the decline of the main thoroughfare and come up with something more creative.

This is a place that would still allow people to take back control, but not simply through their purse. Reimagining Main Street may not mean, as McKinsey suggests, simply engineering a "more engaging shopping experience" and "shoppable entertainment." It might mean instead creating the space for social capital to flourish in a way that aligns better with today’s challenges.