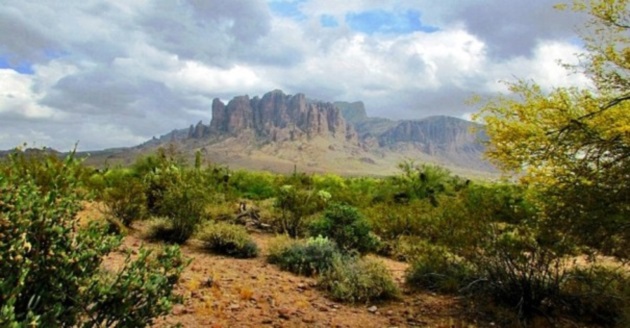 We left Tombstone on a Thursday morning with our destination a little over 200 miles north. Along the way, Gypsy gave us a few scary moments, and we kept getting an overheating transmission fluid signal on steep inclines. Arizona Highway 77 is a very scenic roadway but it does have some mighty long uphill pulls.

In Globe, I made a few calls and learned the problem was probably my oxygen sensors, or Gypsy has a burnt ignition wire. It’s an easy fix.

Later in the day we discovered an RV park near Roosevelt Lake called Tonto Creek Trail. Weekly rates were very reasonable, it’s relatively small with well-maintained sites, comfortable, convenient, quiet and very clean. The couple that manage the park are very friendly helpful people. There is an abundance of bird life, including our favorite, the Gambel Quail. The morning call of the quail and dove woke us to a bright sunny day. We love the rugged, wild and untamed country of Arizona. People talk of visiting foreign lands, and I agree that such trips are thrilling.

As a young lad in the Navy I visited many a foreign port, and had trips to countless far-off cities and hamlets, the isles of the Caribbean, and even the ice fields of the Arctic. It was a thrilling time but it was nothing compared to the magnificent beauty of my own country.

It’s a Saturday morning, and the song birds are outside our window calling to us to get up and start the day. I check the clock; it’s time to get up: 5:10 in the morning. The warm sun is peeking its face over the Sierra Ancha. Time to brew the coffee! The weather report is good, a sunny day with an expected temperature of 83 with humidity of 5%.

Several years ago, we spent a short visit here in Tonto Basin and promised to return. There is so much to see and do.

Today, we will pass along the Apache Trail. In the early 1800s, various Apache tribes used it while moving to the cool forest of the Sitgreaves. In later years, the trail was a stagecoach route through the Superstition Mountains and Four Peaks Wilderness Areas.

After breakfast we left camp, travelling south along the shores of the lake on Arizona 188 towards the Roosevelt Lake Marina. Crossing the Roosevelt Bridge and turning onto Arizona 88, we immediately realized this was no ordinary state highway. The pavement ends less than one mile from the bridge head at 88.

The road meets our expectation, it is very narrow in spots, only allowing one vehicle at a time to wind down along a steep wall of rock. There are no safety barriers and many blind and sharp, tight curves.

Diane asks, “Is this one way?” I believe not, I replied; so, we just keep moving hoping another vehicle is not coming up the incline. Bouncing up and down, the road is a washboard of bumps and foxholes with dust rising everywhere. Several hundred feet below the road’s edge, a blue green waterway leads into the canyon opening and Apache Lake. We are thrilled, this is great; today will be a grand adventure as we head out into the Superstition Wilderness. The road limits your speed to about 10 to 15 mph.

This is not a road for modern RVs or fancy sedans and SUVs. Vehicles coming the opposite way do throw stones and dust can be thick.

The first five miles we rode along a river of crystal-clear water. Many fishermen are after the catch of the day. The beauty of this canyon is stunning, a blue water lake ahead and below, massive desert mountain peaks on both sides, beautiful wildflowers and cacti in full bloom and impressive song birds everywhere.

It is hard to describe this land; Arizona has many faces. I think my friend Lannie would really enjoy this terrain; it would be like he died and went to picture heaven.

We visited several campsites; there are many, very primitive and designed for outdoorsmen, people who enjoy roughing it, being in nature under canvas, and cooking by campfire. Whatever you might need, you must pack it. There are no stores, lodges or washrooms.

I find it difficult to finding the proper words to fully describe a trip down the Apache Trail. At times you are close to danger and need to focus clearly, and then the next few minutes you are visiting a mountain vista with peaks reaching into the blue.

You travel open areas of green mesquite, rocky cliffs, and narrow canyons of tall cottonwoods. Just beyond Fish Creek we drove directly towards a rock cliff; I figure the road must turn to the left after crossing the creek, but no — it swings right and we began an exciting drive up the face of this mountain, a road cut into the cliff face. It is a narrow, steep, winding and rock-strewn road, with rocks that move and shift as you ascend towards the top. The views from the top are fantastic. Standing on a rocky ledge 5,000 feet above the valley below makes me feel so small, insignificant and just another creature of no consequence in God’s creation.

Our 45-mile trip through the wilderness took us over four hours, stopping at three lakes along the way and exiting at Tortilla Flat, a canyon oasis for travelers. The hot, hazy Valley of the Sun and the enormous city of Phoenix lies ahead.