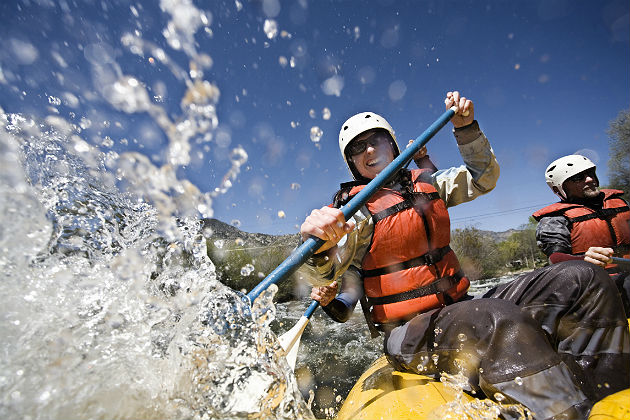 Summertime is clearly the best time for whitewater rafting as melting snow and dam releases power up rivers across the country.

Whether you’re looking for a pleasant family float or a white-knuckle run through swirling eddies, standing waves and raging rapids — here’s some stuff you should know before heading to the river:

All rivers hosting commercial rafting trips are graded from mild to wild based on a rating system ranging from Class I to VI. If it’s a beginner or family-friendly rapids you seek, book a Class I or II trip.

For more thrills, move up to a Class III trip. Class IV and V trips can get really rowdy and outfitters usually recommend or require guests to have previous rafting experience. Forget Class VI rapids. They are deemed unrunnable.

Trip organizers provide equipment, including the raft, paddles, life vests, helmets and sometimes wet suits. Camping gear is provided on multiday trips. As for your own clothes, wear fleece, nylon and high-tech natural fabrics such as sports-oriented wool blends. They possess a unique ability to keep you warm — even when wet.

Keep in mind that even during the dog days of summer, river water can be extremely cold. River guides will tell you — always dress for a swim.

After checking out several dozen whitewater rafting trips and outfitters from Maine to California — here is Passport America’s selection of eight of the country’s top rafting adventures:

Let’s start out West — and what better setting for the premier multiday whitewater rafting trip in North America than the Grand Canyon? The Colorado River winds its way for more than 200 miles through the Grand Canyon, offering day after day of big water excitement as it plunges through the most beautiful desert canyon on earth.

Western River Expeditions has been running three- to seven-day trips in the canyon aboard their big motorized rafts since 1961 and there’s no better or more experienced outfitter on the scene. Western’s three-day trip begins in the lower 100 miles of the canyon where the rapids are a bit tamer (Class II and III) than on its six- and seven-day trips (Class III – V) originating up-river at Marble Canyon. All boating/camping gear, meals, guides and transfers between the canyon and Las Vegas are included in the tour price (three- or four-day trips start at $1,470 per person and six- to seven-day trips start at $2,810). Trips fill up fast so be sure to reserve your dates well in advance of your planned travel.

Class V rapids (read challenging) are possible in May and June. OARS, a California-based outfitter that’s heavy into whitewater rafting, conducts single and multi-day trips on “The T” ranging from a tumultuous one-day run to a more relaxed and carefree three-day rafting/camping vacation. Wine and tasting trips are available as well. Prices range from $269 for a one-day trip, $549 for two days and $799 for three days. Southern Oregon’s Rogue River is another legendary rafting destination — and yet another “Wild and Scenic River” — that invites rafting enthusiasts of all skill levels to join trips of 1-4 days duration along a majestic 40-mile section of the Rogue.

This remarkable stretch of whitewater features more than 20 named Class II-IV rapids. Morrisons Rogue River Adventures has been one of the leading guide services on the Rogue for more than 40 years, and the company offers a variety of value-priced rafting trips, ranging from half-day and full-day runs to three- and four-day outings.

Guests can choose either tent camping or lodge accommodations, or a combination thereof, utilizing Morrisons’ several historic log lodges and cabins. Half and full-day trips are priced from $65-$95; a three-day camping trip is $599, and a three-day lodge trip is $1,089.

The Middle Fork of the Salmon River rushes and tumbles through one of the largest and most remote wilderness areas in America, the Frank Church River of No Return Wilderness. It is a river hemmed by majestic cliffs for most of its runnable 106 miles and its waters range from gentle Class II riffles to heart-pounding Class III and IV sections, including such aptly named rapids as Hell’s Half Mile, Devil’s Tooth and Ski Jump.

Easily reached from Denver or Colorado Springs, the mountain town of Canon City sits right on the banks of the mighty Arkansas River and the town is well stocked with outfitters ready to present plenty of rafting options including half-day, full-day and multi-day trips ranging from mild to wild.

Arkansas River Tours, with offices in Canon City and Cotopaxi (34 miles west of Canon City), offers a complete roster of Arkansas River trips, ranging from a laid back half-day run in Bighorn Sheep Canyon to a hair-raising day-trip through the Class IV and V rapids of Royal Gorge. Multiday trips take in the famous gorge and longer stretches of the Arkansas. Half-day and full-day trips range from $59 to $149 and two- to three-day trips for $325-$599.

What are visitors to Santa Fe and Taos to do once they’ve had their fill of green chile enchiladas and art galleries? We suggest hopping aboard a raft or inflatable kayak for an exhilarating run down the Rio Grande River. Locally based Far Flung Adventures has been organizing such trips for nearly 40 years and they offer river trips to suit just about everyone. The company lists more than a dozen trips of half and full day duration on various sections of the Rio Grande (and nearby Rio Chama River) including the wild and crazy Taos Box — 17 miles worth of raging Class III and IV+ rapids that are often cited as some of the best in the West.

Far Flung also puts together multiday trips and specialty combo trips that include fishing, yoga, backpacking or musical entertainment. Half-day and full-day rafting or inflatable kayak trips range in price from $110-$155, while multi-day trips run from $350 to $599.

Hands down the premier whitewater rafting destination in the Southeast, the Chattooga River, which flows undammed along the mountainous border between Georgia and South Carolina, is one of few nationally designated Wild and Scenic Rivers east of the Mississippi that hosts commercial rafting.

It all started here in the early 1970s with the movie “Deliverance,” a dark thriller starring Burt Reynolds and John Voight that included some thrilling whitewater rafting action on the Chattooga. Southeastern Expeditions began rafting the river in 1972 with equipment purchased from Warner Brothers Studios.

That popular and enduring flick made the river famous — and it gave Southeastern Expeditions the early lead among commercial rafting outfitters. Most companies, including Southeastern, divide the Chattooga’s nearly 20 miles of whitewater into two sections.

Section 3 is the most popular, featuring six hours of mostly Class II and III rapids – with a Class IV thriller (Bull Sluice) at the end. Immediately downriver, Section 4 is an adrenaline-pumping seven-hour run featuring mostly Class IV and V rapids and some of the steepest drops of any river in the country. Southeastern’s Section 3 and 4 trips range in price from $77 to $129 and it also offers an overnight rafting/camping package priced at $330.

They call it the “Beast of the East.” When the Army Corps of Engineers release water from Summersville Lake for six weekends in September and October each year, the Gauley River below gains its peak rafting flows to become one of the most demanding and downright exciting single-day rafting trips in America. Located in a wild and remote region of Appalachia, the Gauley (home to the annual U.S. Rafting Association Championships) drops nearly 700 feet in 24 miles and features more than 100 rapids. Two distinct 12-mile sections (Upper and Lower) offer a diversity of rafting action.

Family owned and operated since 1972, River Expeditions is one of the region’s leading outfitters, offering a variety of rafting and camping options. The Lower Gauley is the more moderate of the two, characterized by Class III and IV rapids that are optimal for most beginners and inexperienced rafters.

Fall runs down the Upper Gauley are something else entirely — recommended only for serious and experienced whitewater enthusiasts. Summer trips — available from River Expeditions from Memorial Day through Labor Day — offer a different perspective on the river, combining exhilarating rapids with magnificent scenery from start to finish.

Depending upon the day of the week, single-day runs on the Upper and Lower Gauley range in price from $115 to $160. Packages that include both sections and two nights of camping range from $165 to $275.