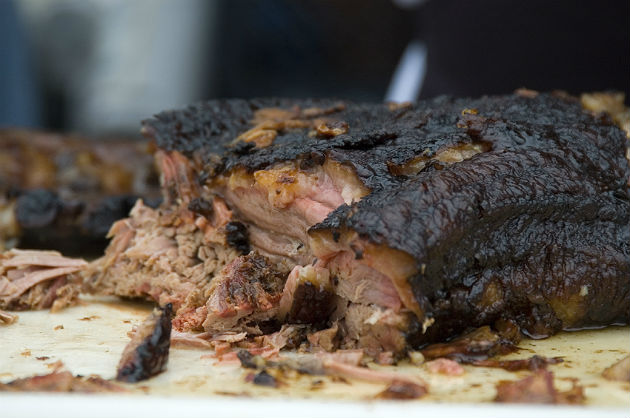 Historians tell us that for many millennia, man has applied low, slow heat to a variety of meats to make them meltingly tender and delicious. Christopher Columbus and other New World explorers found Caribbean aboriginals cooking fish and other meats on grates of sticks lashed together and suspended over smoldering coals — dousing their food with fiery pepper sauce.

It's a practice known today, of course, as barbecuing, and it has become part of the American culture. More than that, in certain parts of the country, the fervor surrounding barbecue is something akin to religion.

There are multitudes of restaurants across the country ready to serve up a smoky, perfectly moist platter of ribs or pile together a pulled pork sandwich to satisfy your 'cue cravings — and here are 10 of the best:

Some years ago Aaron Franklin was serving up his barbecue from a trailer, but moved up to bricks and mortar after being crowned "Texas King of Barbecue." The place is now world famous for its sausage and its impossibly tender beef brisket — slow-cooked for a full 18 hours.

The house sausage benefits from Texas post oak smoke, coming from the pit with a crispy casing. Try the "Tipsy Texan," a sandwich plate consisting of a heap of chopped brisket piled on a bun with sausage, coleslaw and pickles.

If you're not queued up well before Franklin's 11 a.m. opening, the food will be gone before you can place your order. Pro tip: If you miss out here or want some more good Austin-style 'cue, drop by the John Mueller Meat Company. It's where Aaron Franklin got his start.

This Houston-area eatery made the Food Network's "Top Five BBQ Restaurants in America" list, and the main reason is owner/chef Ronny Killen's savory pecan, oak and mesquite-smoked brisket. It's a hunk of meat with a perfectly crisp black "bark" crust and succulently tender interior. Dry-rubbed with salt and black pepper imported from India, Killen's brisket is so juicy it makes sauce irrelevant (though they do offer three kinds, from mild to tangy).

Other choices include ribs, pulled pork, sausage and fall-off-the-bone chicken — along with typical sides, such as ranch beans and potato salad.

Housed in a red brick building on Brooklyn Avenue that's been serving up slow-smoked barbecue since the early 1920s, Arthur Bryant's is probably the nation's best-known barbecue restaurant. Its fame stems from massive piles of wood-smoked meat served on slabs of white bread and topped with one of three patented, prize-winning sauces.

The history of Alabama's most legendary barbecue restaurant goes back to 1925 when Bob Gibson, a 6-foot-4, 300-pound railroad man started selling barbecue that he cooked in a pit in his backyard. Folks came for miles around to get some of Big Bob's 'cue, and thus began a family business that has lasted through four generations.

Ribs are the specialty here — dry-rubbed and hickory smoked for about five hours and glazed with Gibson's Championship Red Sauce. These ribs have led the Gibson clan to four consecutive grand championships at the Memphis in May World Championship Barbecue Cooking Contest. Popular sides include turnip greens, green beans, mac and cheese and fries.

The food clearly reflects the Texas upbringing of the Fox boys, identical twins named Justin and Jonathan. After relocating to Atlanta in 2000, the brothers were serving up their barbecue in a bar operated by friends — until the Atlanta Journal-Constitution named their 'cue the city's best, prompting a move in 2007 to larger quarters on DeKalb Avenue.

It all started in 1948 when Charlie Vergos set the standard for "Memphis-style" barbecue ribs in a basement restaurant in the city center. Charlie perfected a paprika-based rub derived from a family chili recipe that produces the signature flavor of the restaurant's award-winning pork ribs.

Pit masters are like rock stars in South Carolina, and Rodney Scott gets plenty of adulation around town for his outstanding ‘cue – not to mention high praise in a recent article in The New York Times entitled “Pig, Smoke, Pit: This Food is Seriously Slow.” Scott, who’s been barbecuing since age 11, and his crew cook whole hogs overnight, selling vinegar and pepper-sauced ribs, pulled pork plates and sandwiches the next day (Wed. to Sat.) to a sell-out crowd at his rickety country store and restaurant not far from Myrtle Beach.

The self-proclaimed "barbecue capital of the world" and No. 3 on Food Network's top-five list of American barbecue joints, Skylight Inn is run by the Jones family, whose minimalist methods haven't changed since Pete Jones — then only 17 years old — opened the place in 1947.

Whole hogs cook all night in open brick pits fired with white oak coals. The finished meat is seasoned with salt, pepper, cider vinegar and hot sauce as it's chopped. Sole accompaniments to a flesh-fest here are white slaw and a square of cornbread.

You might not expect to find authentic Southern-style, pit-smoked barbecue in Brooklyn, but then neither did The New Yorker, The Village Voice, bon appétit or The New York Times. All of those publications have written rave notices about Billy Durney's slick new (2013) 'cue restaurant in the Red Hook neighborhood of Brooklyn.

Another joint — far from the traditional barbecue belt — that's fast gaining fame is Cliff Allen's new eatery that, according to Portland Monthly magazine, "breaks bad, beautifully" from other restaurants in this ever-gentrifying city. Allen's is another cart-to-riches story, as the young barbecue wizard moved recently from a tiny food cart into permanent digs on N. Williams Avenue.