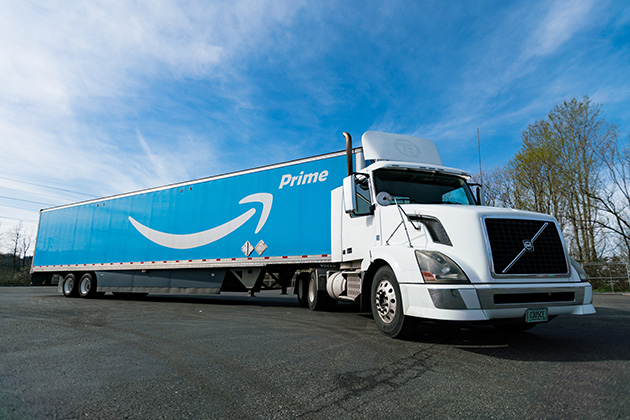 Will a Prime truck be a regular fixture at your local school in the near future?

Big Tech, including Amazon, has been asked to release acquisitions from the past decade. There’s increasing pressure on the company, as it contests losing a Pentagon cloud contract to Microsoft while continuing its ubiquitous global reach.

Amazon is also known for warehouse safety violations. Fifteen senators, including presidential contenders Elizabeth Warren and Bernie Sanders, have asked the company to publish serious worker injuries. Given the company’s labor reputation, how qualified is Amazon to have a strong presence in U.S. classrooms?

One generation from now, will young workers cultivated in the corporatized world of Amazon-think love the brand and never think to organize against its retail, military, AI, and quasi-Orwellian education endeavors?

Simply stated, it wants future generations not to know words like “Orwellian:” Amazon wants to control significant swaths of the U.S. education and labor markets.

Corporate reach into classrooms is a decades-long saga dating back to the mid ‘90s — if not before. The first charter schools in 1992 paved the path for outside forces meddling in school board-controlled decision-making, and allowing corporate ads in public schools grew more common during the same period.

What’s wrong with corporatization of education?

One group, represented by Betsy DeVos as education secretary, wants to privatize the public education system through vouchers and charter schools. This plan collects public tax dollars and then unevenly applies them to any number of dubious experiments requiring administrative bloat, teacher micromanagement, and — most importantly — control of students. This is all in the name of education reform.

The education reform movement has waned, but it still has adherents — as we witness in Amazon’s role in Virginia classrooms. As Amazon headquarters extends its “cognitive capital” to Pentagon territory, state school access is part of the deal. In Virginia, a “tech-talent” pipeline is being actively pursued.

STEM is being used now to overteach certain skill sets while underteaching others. Tracking is what this used to be called, and, as Jeff Bryant indicates, Amazon has its hands in Virginia Career and Tech Education (CTE), also known as vo-tech. It has large Virginia college contracts as well — covering all education levels from kindergarten onward.

The classroom technology debate continues. Six years ago, Microsoft sounded alarms by launching a new classroom tablets initiative. Classrooms were described as learning markets, divided into sinister performance tracks with their own diagnostics and products. There was a distinctive takeover vibe in the air:

“The digitized, union-free classroom offers a speculative bubble driven by standardized curricular content and technological delivery systems, learning disability medical diagnostics, and outsourced student data available to third-party vendors for unbeknownst for-profit machinations. Both status quo and remedial educational needs are supposedly met and exceeded in a whirlwind of secret contracts, overpaid consultants, exuberant industry-speak, speculative data clouds, and prolific techie expertise. This is all disturbingly concentrated in a rather small circle of players — think corporate monopolies — pouring the salt of total uniformity into the festering wound of this corporate education takeover.”

Instead of a total takeover, subsequent years saw the Red for Ed wave of teacher union activism challenge corporate classroom cultures without jettisoning technology. This is education’s culture war: some school districts go corporate and some don’t.

As Amazon expands influence, Virginia teachers face a state congressional battle over collective bargaining rights. Now facing the state Senate, HB 582 “...is a comprehensive bill to permit school employees, nurses, firefighters, and other public workers to engage in collective bargaining with their employer.”

“This shift from teacher as primary content deliverer... to classroom technology manager will radically alter the practical and affective landscape of the classroom. Engaged teachers bring living energy to classrooms. Anyone who has ever taken an online class knows the difference between computer-generated and teacher-generated lessons. This is not an indictment of teaching with the latest technology; it is an indictment of for-profit delivery mechanisms that render real teaching obsolete.”

The massive FY2021 proposed military budget has a technology emphasis revealing Amazon and the military’s shared vision of tech-enhanced performance: whether it be a warehouse (or plutonium pit) worker or a soldier.

Future workers don’t have to study writing because they won’t have to fill out injury reports. Heavily surveilled Amazon warehouses and distant battlefields will have automatic computer-generated reports linking biometrics to real-time data drops. They can even copy Congress directly: how’s that for tech talent?