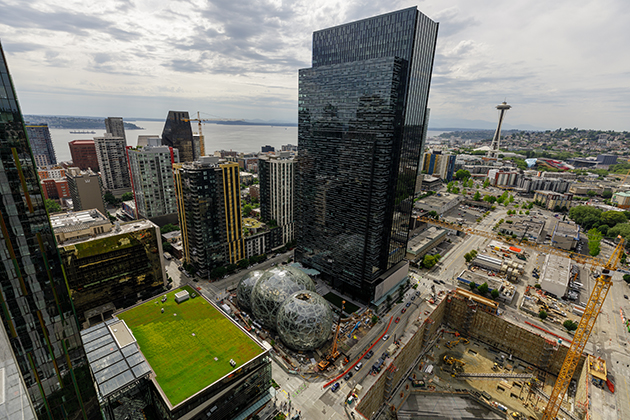 In the world of global corporate dominance, Amazon stands above and beyond when it comes to doing what it wants. Amazon, which reported $11.2 billion in profits last year while paying no federal taxes, pretty much does what it wants, doesn’t it?

Well, not quite. In November, when the company announced its expansion plans, known as HQ2, to include Long Island City in Queens, residents, community activists, and those taking on Amazon’s monopolistic grandeur immediately mobilized opposition.

The biggest worries? While the HQ2 expansion project promised to produce 25,000 six-figure jobs in a blighted local economy, there were many complaints that HQ2 would fundamentally transform the city’s character while also giving the Seattle-based e-commerce giant billions in tax breaks.

Extra traffic that brings Amazon commuters into Long Island City will also bring more pollution and crowded streets. Rent and home prices would skyrocket in a gentrifying climate catering to the new Amazon employee class. Schools would have to carry the extra weight of new students under existing budget constraints.

All of this amounts to loss of local character in a city that values its diverse and unique history.

In the end, local character and vehement opposition to corporate welfare won. Amazon announced last week that it was no longer considering New York City as the location for its grand headquarters expansion.

Some New York politicians supported Amazon HQ2, while others, like U.S. Rep. Alexandria Ocasio-Cortez and New York Assembly Member Ron Kim, opposed it. Mayor Bill de Blasio and Gov. Andrew Cuomo had promised $3 billion in tax break incentives, which incensed many people who do not want to fund Amazon expansion efforts out of their own pockets.

Activists hit the streets, criticizing the company and city’s “lack of transparency” and unclear motives from the beginning, according to The Verge: “Just one day after Amazon confirmed the two finalists for its HQ2 hunt, protestors gathered a block away from the proposed site with signs urging the company to ‘stay the helipad out’ (a reference to the Amazon’s request to build a helicopter landing on-site).”

This is a major victory for people who cannot sit idly by and watch Big Tech negatively impact another urban locale like San Francisco, Seattle, and Silicon Valley. It was rather audacious of the company to think it could swoop down on New York City, and fundamentally transform local character in unimaginable ways, without serious pushback.

This is not to suggest that Amazon, or Big Tech more generally, is done impacting New York City. It just won’t be to the tune of company helipads and massive subsidies.

It appears that another of Amazon’s chosen location for headquarters expansion — Arlington, Virginia — has presented Amazon with a hefty cash grant of $23 million “...over 15 years based on incremental growth of an existing local tax on hotel rooms,” according to CNBC.

Arlington activists are organizing against subsidizing the world’s most profitable company. There, the major concern is homelessness due to lack of affordable housing, as Arlington’s HQ2 plans promise to drive up rental prices and push service sector workers to the periphery. This has been referred to as the “Amazon effect.”

Add to all this the fact that it’s been speculated that subsidies for all three original HQ2 locations — New York City, Arlington, and Nashville — are estimated to be at least $4.6 billion — twice what the company originally claimed.

All of this cost estimate speculation comes from the fact that HQ2 planned to take advantage of “opportunity zones” — supposedly blighted areas needing economic infusions: “Under the tax overhaul signed by President Donald Trump last year, investors in opportunity zones candefer payments of capital gains taxes until 2026, and if they hold them for seven years, they can exclude 15 percent of the gains from taxation,” according to The Intercept.

It is still unclear if Arlington will go the way of New York City.

It’s possible that Nashville, which was originally chosen for a new, albeit smaller, operations hub alongside New York City and Arlington, could function as a more hospitable alternative.

But that idea has local critics as well. New York City’s anti-HQ2 activist tactics provide a template for Arlington and Nashville activists, although the cities are radically different and require different strategies.

While some locations will decry the symbolism of corporate arrogance, Amazon helipads are still waiting to be built. The only question is “Where?”