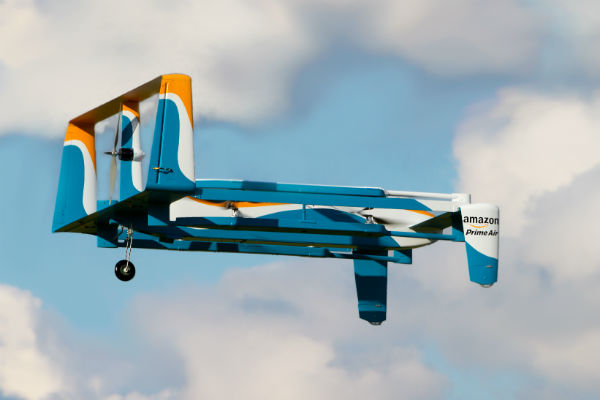 Amazon has always been on the forefront of advancements in the retail world. From technology to delivery, Amazon is constantly disrupting the industry, so it's no surprise they closed out 2016 with a bang — a big bang.

Amazon made headlines worldwide after the opening of Amazon Go. Then, a few days later, they successfully completed their first drone delivery. Of course, the online retail giant didn't stop there: A recent patent from Amazon describes an "airborne fulfillment center utilizing unmanned aerial vehicles for item delivery," according to the U.S. Patent and Trademark Office.

Amazon's recent advancements reinforce their stronghold on the industry and offer lessons and ideas for other retailers. Even though these groundbreaking advancements might currently be out of the picture for most retailers, you can bet they will have a lasting impact industrywide, so you should take notice and prepare yourself for the future.

Amazon Go is the future of retail

When it comes to retail, Amazon always lagged behind Wal-Mart for one major reason: groceries. With the opening of Amazon Go — a brick-and-mortar grocery store — Amazon proved they can adapt to accommodate customers while creating a new way of shopping that also solves a major customer problem: the checkout line.

Amazon Go and the Just Walk Out Technology might seem incredible complicated, but it uses the same type of technology self-driving cars use: computer vision, sensor fusion and deep learning, according to Amazon.

"Shoppers walking into the store call up the Amazon Go app and hold their smartphone to a scanner as they would at an airport security line. That opens a gate. Then they just pick any combination of products and walk out," according to The Seattle Times.

The Just Walk Out Technology senses product movement within the store and adjusts the customer's virtual cart accordingly. Once you — and your products — have left the store, Amazon will bill your account and then send you a receipt. It's a simple concept that was extremely difficult to put into motion, but Amazon appears to have done it.

Amazon Go solves the problem of frustrating checkout lines for customers. Amazon realized this frustration and provided a solution. Because Amazon Go is venturing into uncharted territory, complications are expected, which is why Amazon Go is currently open to only Amazon employees during beta testing. They are expecting to open to the public this year.

Amazon has always been a leader not just in e-commerce but the delivery industry, too. From utilizing USPS delivery vehicles on Sunday to installing drop boxes at 7-11, Amazon is focused on improving the customer experience even after the products have left their warehouse.

Now, after much anticipation, Amazon has successfully completed the most-anticipated delivery of the decade: a drone delivery.

For years, Amazon has discussed the possibility of drone deliveries, and on Dec. 7 in Cambridge, U.K., it went from a possibility to a reality. The first Prime Air delivery took 13 minutes from purchase to delivery, which successfully demonstrated Amazon's mission for Prime Air.

According to Amazon, Prime Air is "a delivery system ... designed to safety get packages to customers in 30 minutes or less using unmanned aerial vehicles." Not only does Prime Air offer (almost) instant gratification, it also has the potential to "increase the overall safety and efficiency of the transportation system."

This successful drone delivery is a major breakthrough for the industry, but it might be some time before we see it here in the U.S. because of FAA restrictions and lack of regulations and guidelines. Even so, it is time to start preparing.

Amazon didn't stop there, though. Just weeks after the first successful drone delivery, Amazon filed a patent for an "airborne fulfillment center," which could be described as a flying warehouse in the sky. The airborne fulfillment centers would work hand-in-hand with drones to deliver goods at an even quicker, more accurate rate. While still in the planning stage, Amazon already has a vision in mind.

In Amazon's patent, they offer an example of how the airborne fulfillment centers in everyday life: football games. Amazon could stock one of the centers with items typically purchased — or desired — during a football game, like sporting apparel, food and beverages. Then, the center would be deployed to the location of the game in order to deliver goods quickly to event-goers.

Even though it's just a concept, Amazon is creating its own path into the future. These airborne fulfillment centers and drone deliveries are still futuristic to most, but they are creeping closer and closer.

Amazon offers several private-label products, but the most recent collection is turning heads. The new private-label men's clothing collection Buttoned Down currently features an assortment of dress shirts, but in the future will include pants, sweaters and other shirt styles.

While it's not surprising that Amazon created Buttoned Down, what is surprising is how they are marketing this private-label collection.

Amazon created Buttoned Down not for the bargain shopper but for the high-end shopper — and it is clear in the marketing. Instead of comparing the Buttoned Down shirt to a Wrangler's shirt, Amazon compares it to shirts from Nordstrom, Lands' End and the like. The product description also pushes the high-end concept with features like "shatter-resistant buttons" and "100 percent Supima Cotton."

And, not only is Amazon creating a product to compete with high-end retailers, but they are also attempting to create a similar shopping experience with benefits like a "no questions asked" return policy. Clearly, Amazon is a force to be reckoned with in the specialty retail sector.

Finally, Amazon did something unique with this private-label collection. Unlike all others, Buttoned Down is solely available to Prime customers. In the past, the fast shipping and additional services attracted customers to pay the extra cost for Prime, but now Amazon can attract even more customers to upgrade by offering exclusive, quality collections offered only to members.

With Amazon Go ready to compete with Wal-Mart and Buttoned Down ready to steal high-end clothing customers, Amazon has expanded the scope of their customer base and offered solutions to some of the peskiest problems plaguing the retail industry.

2016 was a year of advancement and innovation for Amazon. Even though these advancements might have little immediate impact on the industry, you can't be stagnant. You have to look to the future like Amazon did.