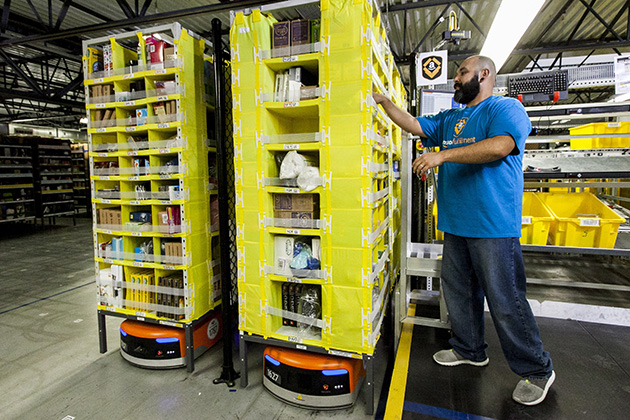 "There are no rules here — we're trying to accomplish something." — Thomas A. Edison

Amazon must have channeled the famous inventor because the company threw the rules out the window years ago. They ventured into uncharted territories without looking back and challenged the standard way of doing business in the retail industry.

And it's no surprise after such a successful end to 2016.

As Amazon turned the page from 2016 to 2017, they were experimenting with drone delivery, Amazon Go and more. But that was so four months ago. Amazon has moved on — to self-driving cars, space exploration and an IoT-connected mirror that partners with Alexa to provide fashion advice.

Amazon's success is widespread; there is not one thing that independently makes them successful.

However, that success can be credited to the culture and environment of the business — specifically, their confidence to break the rules. Let's take a look at five rules Amazon has broken and how breaking these rules resulted in success.

Don't assume that retailers should close their locations and become online-only retailers, though. E-commerce might be the up-and-coming trend in the retail industry, but it's not replacing physical locations.

It's ironic that Amazon — the online retail king — has realized the need for physical locations. While others are closing shop, Amazon is opening stores with unique, innovative features like stores without cash registers.

Don't just follow the trend; you'll blend right in. Find what suits the needs of your customers and your business. You never know, physical locations might be the solution to a problem.

Broken Rule No. 2: Keep everything in house

Companies regularly strive to keep all research and development in house to prevent any issues, like security. When you keep everything in house, you have more control and oversight.

Currently, one of Amazon's potential ventures is in self-driving cars. However, they aren't jumping in head first, trying to develop the technology on their own. Instead, they are partnering with other companies to see how the technology works first. If the technology seems to be a good long-term investment, Amazon then might invest in developing its own fleet of self-driving vehicles, cutting out the middle men.

This wouldn't be the first time Amazon outsourced new ventures. When they began same-day deliveries, they started with couriers then pulled back once they had enough data to determine long-term success.

Broken Rule No. 3: Don't venture into areas you aren't familiar with

Amazon is a leader in e-commerce, recently venturing into other related areas, like improving deliveries and creating exclusive lines for its Prime members. But did you know their recent success and jump to profitability had nothing to do with the e-commerce business? Instead, Amazon can credit Amazon Web Services.

AWS is a newer venture of Amazon into the cloud-computing business, competing with Google's Alphabet and Microsoft. For a technology startup, AWS has been incredibly successful.

"The company reported quarterly AWS revenue of $3.66 billion, slightly topping estimates and reflecting 42.6 percent growth, and operating income of $890 million," according to MarketWatch.

Despite the success of AWS, consumers are still wondering why Amazon ventured into this realm. The answer? The profits from AWS subsidize spending for e-commerce initiatives, like expanding to India and Australia, and improving the Alexa platform.

The mirror wasn't broken, but Amazon fixed the problem anyways — they connected it to Alexa using the Internet of Things.

When you replace your regular full-length mirror with the Echo Look, your room turns into a photo studio thanks to the camera and lighting. The Echo Look also replaces your phone for selfies — instead you ask Alexa to take your selfie through the mirror. The camera also blurs the background so your messy room is disguised.

The Echo Look isn't something consumers were necessarily searching for, but Amazon realized the potential and developed a product based on their consumer wants and needs. The Echo Look didn't replace the mirror, it connected it to your digital world.

Broken Rule No. 5: Don't let personal feelings get in the way of business

Amazon founder and CEO Jeff Bezos isn't scared to make bold decisions — everything from putting hovering warehouses in the sky to removing cash registers from stores.

What's next? Now, Bezos wants to go to space with his company Blue Origin. And he plans to sell $1 billion in Amazon stock to invest in Blue Origin annually.

No one could have predicted just how successful Amazon would be, but it's clear why they have become a retail leader. Amazon doesn't avoid the unknown; it seeks it out. And they aren't afraid to go unconventional. After all, rules are meant to be broken.

Success in this industry is impossible if you blend in with the crowd. Follow in Amazon's footsteps and take a chance, break a rule or think outside the box.

"You are remembered for the rules you break." — Gen. Douglas MacArthur